Sometimes You Have to Step Back to Move Forward: Patricia George 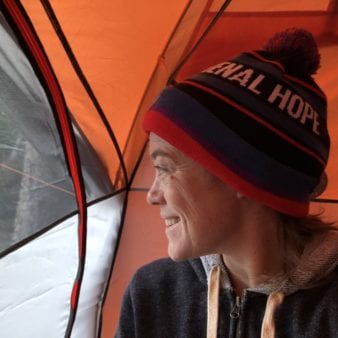 Seventeen days ago, I was less than two weeks out from my biggest race of the summer—The Breck Epic, in Breckenridge, Colorado. Hap and I had planned to race this together, but he was largely on the downlow this summer after having had hip surgery a couple months prior. Leading up to that moment, I was overworked and undertrained.

Last winter, I thought I’d have another epic summer, so I registered for several big races. I added more mountain-biking events, but also built in a few favorites, like the Mt. Evans Hill Climb and the Triple Bypass. I didn’t realize then how little time I’d have this year to prepare. I did what I could, but I had nowhere near the miles or saddle time I had hoped.

My job as a pulmonary hypertension (PH) pulmonologist had been going extremely well, but it required almost all of my energy with three trips to national and international meetings, outreach, and working in an overbooked clinic seeing people who needed answers for their lung disease. Working hard to build something requires so much time and energy. It’s where my heart is and is my top priority, but it came at a personal cost this season. I experienced several “failures” from which I’ve learned and thrived. Failures are important to ultimately succeeding.

My first failure of the year came at the Grand Junction Off-Road Epic Ride 40-Miler in Colorado. Having ridden 500+ miles in my road cycling days, surely a 40-mile mountain bike ride would be a great way to start the season. Except that this 40-mile backcountry race was more technical than I’d imagined, rolling over rock gardens and with plenty of drops and gnarly descents. I wasn’t ready for it technically, and actually did not make the time cut-off, since hiking with one’s bike is nowhere near as fast as actually riding. Lesson learned. I needed more technical skills.

Two weeks later and with much doubt in my mind, I came back and raced a 12-hour race in Castle Rock, Colorado, which covered 84.5 miles in 12 hours. The next day, I rode the windiest 100 miles I’ve ever ridden in the Elephant Rock Century Ride. I was proud, happy, and hopeful, but my body was destroyed.

Then I rode in a three-day BetterRide skills camp by Gene Hamilton, which was the camp I needed. With new basic skills and some extra practice, I was feeling more confident and enjoying the mountain bike more than ever. I felt in okay shape for South Dakota.

The Tatanka Mountain Bike Race 100-Miler in Sturgis, South Dakota, was going to be my first big endurance race of the year. The weather forecast projected 100+ degree heat in the Black Hills. I met my folks there and felt good, although tired from my job, recent travel to Pulmonary Hypertension Association conference, making up for lost clinic time due to attending meetings, and from the drive to Sturgis.

I felt great, actually, during the first two portions of the race, but after the most amazing descent, I found myself on singletrack in the middle of grassy plains without any shade in 100-degree heat. I had a headache and literally felt all the energy sapped out of me. I managed to get to the start of the race at 48 miles, but was so hot and foggy, I knew it wasn’t safe to continue. I was suffering heat exhaustion. And that race, being out in the middle of nowhere with few marshals and no sweep meant that if it turned into heat stroke, I could be in a lot of trouble by myself. So I pulled out, and DNF’d my second race of the summer. My folks and I made the most of it and toured Mt. Rushmore, which was amazing. But I didn’t realize how long it’d take to come back from heat exhaustion.

After I got back to Denver, I was back in overbooked clinics and just could not catch up on work. I started to feel the fatigue, and my blood pressure became elevated, which is a sign of overtraining.

Overtraining is a state where your training exceeds your body’s ability to recover. It manifests as fatigue, elevated blood pressure, elevated resting heart rate, and moodiness (apologies to my work colleagues). Stress is stress, so the physical stress of training, combined with any work stress or emotional stress, all compound one another. Whether you’re an athlete, doctor, patient, or just anyone working hard at work or in life, you need to recognize the concept of training load and recovery.

Despite feeling these signs, I rode the Triple Bypass in Evergreen, Colorado with my Colorado teammates, Greg and Irina. I enjoyed it and felt good, despite feeling a little bit on an emotional edge from overtraining. The next day, I rode mountain bikes at North Table Mesa with my teammate and good friend, Hap. He reminded me nothing is more important than my health and that maybe I needed to back off of training for a little bit and focus on sleep. My nutrition coach also agreed, so I knew what I had to do.

The next week, I was working in ICU and still behind on clinic notes, and although happy in my job, I was feeling exhausted. I tried waking up early to finish the prior week’s clinic notes and exercise before leaving for work at 6:45 a.m. My diet was faltering. Exhaustion leads to crap carb craving and lack of willpower to make healthy choices, which then makes you feel even worse. I still wasn’t sleeping. I even had to stop my 45-minute workout about halfway in to it on the morning of July 20 because I had absolutely no energy. That night, I had a 24-hour sleepless ICU shift, followed by poor recovery before the next day shift. I had entertained doing the Mt. Evans Hill Climb that Saturday before the new schedule came out, but I knew I didn’t have it in my legs, heart, or mind. I just needed sleep.

It became all about no bike and just trying to sleep and take care of myself.

As co-founder and an athlete on Team PHenomenal Hope, I so wanted to race a represent Ornah and PH patients in the Breck Epic, but having this lack of certainty leading into the race was something I had never experienced. This was more than pre-race jitters. This was a voice of reason. On July 24, I put my doubts out in the universe on my Facebook page. The support I received in making that very difficult decision meant the world to me.

I read the book, The Dip, by Seth Godin, which was recommended to me by Menachem Brodie. It’s about deciding when to push through a dip and use it to succeed and when to quit strategically and focus your energies where you’re meant to at that moment.

I realized that, at that moment, I was in the midst of two dips—one at work, where I was sorting out how we can efficiently see the people we need to see and build our research program, and one in my training, where I needed to really dial back and build to move forward. These dips were the etiology of this overtraining syndrome, which, when combined with overwork syndrome, makes you walk on the edge of burnout. When you walk it well, you propel yourself through the dip and come out stronger on the other side. When you falter, you hit burnout, and nobody can afford that as a doctor or as an athlete.

So I wrote the race director, Mike McCormick, told him my race partner had had surgery and I was not feeling healthy, and asked if we could move our registration to next year. I could volunteer at the race this year instead, if they needed people. And after that, my race partner had a serious bike accident that required surgery (he is okay, thankfully), so our team was definitely out. Mike kindly agreed.

This past week, I volunteered at the Breck Epic at bag check, racer check-in, course sweep, course pull, and at the finish line recovery aid station. I hung out with and watched amazing athletes. I rode in the mountains in Breck. I camped outdoors in my tent at night. But most of all, I rediscovered my love for biking again. I slept, rode, ate healthy, and disconnected as much as I could.

I saw what it took in these racers and started to realize exactly what it’ll take in me and in my life to get this side of my life back. It’ll take some changes in how I approach my work and in my own day-to-day choices, and those will include sleeping more, eating healthy, and making time for my own health in addition to serving others.

To my fellow athletes and fellow docs, please read this as a lesson to listen to your body. So often we push through, but sometimes we have to step back.

To my friends, PHriends, patients, and members of the PH community, especially those who empathized and helped me dial back, thank you for reminding me to listen to my body. You inspire me in so many ways. 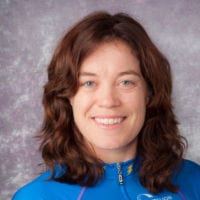 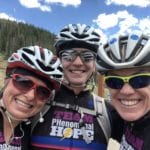 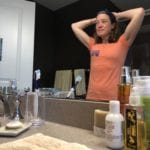 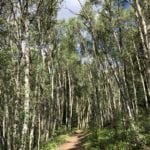 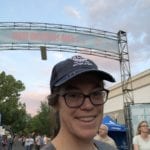 One thought on “Sometimes You Have to Step Back to Move Forward: Patricia George”