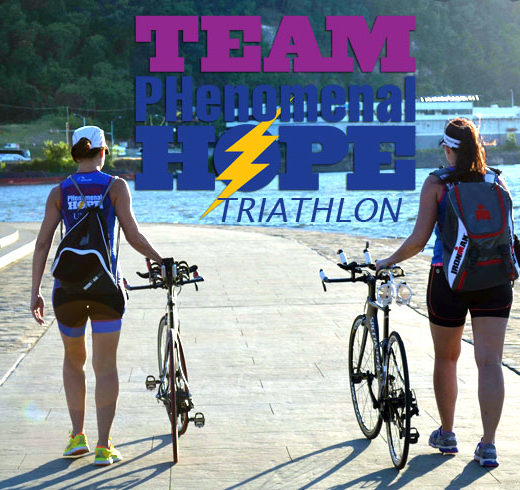 Donate Today to Help Us Race to A Cure

Your donations, large and small, make a HUGE difference – not just financially. It’s your way of letting us know we are reaching people and that our message is making a difference to raise awareness of pulmonary hypertension.

And that gets us closer to our overall goal of finding a cure!

Check out our Crowdrise page for more on donations and to see our fundraisers for specific race events!

What is the Difference Between an Ironman and triathlon Race?

An Ironman Triathlon is one of a series of long-distance triathlon races organized by the World Triathlon Corporation (WTC) consisting of a 2.4-mile swim, a 112-mile bicycle ride and a marathon 26.2-mile run, raced in that order and without a break. That’s 140.6 miles!

It is widely considered one of the most difficult one-day sporting events in the world. Most Ironman events have a strict time limit of 17 hours to complete the race. The race typically starts at 7:00 a.m. and the mandatory marathon cut off is midnight.

A triathlon can be a competitive race including a swim, bicycle, and foot race in that order and without a break but of varying distances determined by each race venue’s organizing body. Some triathlons are just a few miles, some are much longer! While these are not branded by the WTC as official “Ironman” events, they are still incredible physical and mental challenges!

Pulmonary hypertension is a rare, under-diagnosed, and often misdiagnosed disease. Ironman is one of the world’s most challenging and well known races. We want to use our sport to raise awareness and shine a spotlight on Pulmonary Hypertension. Ironman’s mantra is “Anything is Possible” and that is true in both sports and fighting through a disease. We want to be apart of the positive energy as awareness continues to grow and strengthen in the community.

SavageMan 30 Triathlon is an Olympic distance triathlon consisting of a:

Ironman Chattanooga is a 140.6 mile triathlon held in the heart of Chattanooga, Tennessee. The race consists of: