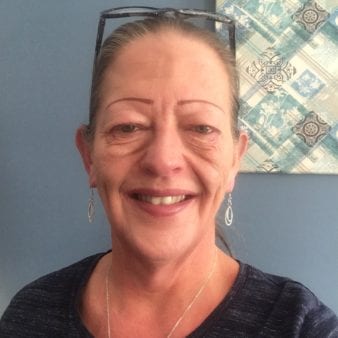 My PH journey began in January of 2014. I was a real estate agent back then. I was out showing property in the morning, and in the ER that afternoon. I never worked another day. In hindsight, there were many warning signs that all us PHers are familiar with, but at that time I was still in the midst of multiple doctor appointments trying to figure out why I was increasingly short of breath and swelling up like a balloon.

I spent nine long days in the hospital where I learned I had PH, a rare disease I had never heard of. I was referred to a local PH specialist at a well respected university where a battery of repeat tests were performed. I was sent home with a diagnosis of left side ventricular failure, a diuretic, orders for 24/7 oxygen, the PH Survival Guide, and the ominous warning that I would need to “get used to my new normal.”

It took a year, but I lost 35 pounds of fluid, used my oxygen diligently and eventually began to feel better. That false plateau lasted another year before I began to worsen again. My worsening wasn’t sudden, but rather subtle to begin with, and I simply could not convince the doctor that anything was amiss. I had spent two years learning about the wrong type of PH, and as it turned out, my instincts were correct. I had inexplicably been misdiagnosed.

Misdiagnosis is common with PH and I am proof that even those who are specialists in the disease can sometimes get it wrong. By the middle of the third year I finally knew something was badly out of alignment and I finally sought a second opinion. The second PH expert believed that my PH was perhaps caused by my liver, and ordered me to be evaluated by their hepatology department for portopulmonary hypertension (POPH). I was started on two oral therapies immediately. He truly seemed amazed that I was alive and had walked into his office unassisted. During the extremely stressful process of liver transplant evaluation, POPH was eliminated and the real cause, an atrial septal defect (ASD) was finally seen on an echo. To this day it confounds everyone that I could have been evaluated by my local cardiologist, the local hospital where I went to the ER, and a well respected university program, and all of them failed to detect the ASD.

By this time I was noticeably worsening and no longer believed anything anyone told me, and so I sought a third opinion at the PHCCC at Mayo Clinic in Jacksonville, Florida. I was finally diagnosed with Group 1 PAH due to CHD-ASD. Mayo, under the direction of Dr. Charles Burger, ordered a new right heart cath that showed my pressure had actually gone up even though I was on two oral medications. My heart was extremely enlarged with severe RV failure, and I was failing fast. I was immediately started on IV Veletri in addition to the two oral medications, and I remain on three therapies to this day.

Because the PH expert world is small, it turns out that my local expert, Dr. Chad Miller at Piedmont Medical in Atlanta, knows Dr. Burger so I now have an abundance of collaborative care between my local center and Mayo Clinic. The two truly saved my life. Of course, traveling to Mayo has a cost and so I am most grateful for Team PHenomenal Hope and the Unmet Needs Fund that will help me travel to maintain this care going forward.

The moral of my story is: Seek a second opinion, or even a third, from another PH expert and if possible a PHCCC. Trust your instincts if things seem off or discordant with whatever you have been told previously. PHCCC’s are designed to offer second opinions and to work with your local doctor, so please take advantage of it if you can. Time is not a friend to PH so please don’t hesitate.