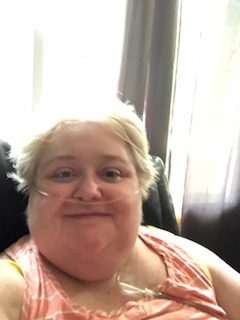 My story is a long and winding road. Currently I am going through several rounds balloon angioplasties in my lungs. I was diagnosed with CTEPH in 2011 and in 2017 with PH due to left-sided heart failure. I look back on my journey and how this all started. It seems like I’m looking at it from someone else’s perspective because of everything that has happened.

It started in 1994 with four miscarriages. Since that time I’ve had over 150 blood clots throughout my body. In 1998, I developed clots in my legs and lungs, and was diagnosed with lupus, fibromyalgia, and antiphospholipid syndrome. Since then I have also been diagnosed with raynauds, gastroparesis, chronic kidney disease, CHF, and of course pulmonary hypertension. 2001 is when my PH symptoms started, even though we didn’t know what it was at the time. I was occasionally out of breath and periodically I would get dizzy. Many doctors told me it could be caused by a lot different things (being overweight and out of shape), or would blame it on the diseases I already had.

It would not be until January 2010 when I heard the term pulmonary hypertension and not until October 2010 that I was officially diagnosed. Shortly after my diagnosis I was started on Remodulin and was told I would need surgery to remove the blood clots from my heart and lungs. This began a two year battle with the state to approve my surgery, since I was on Medicaid at the time.

If I could offer one piece of advice it would be ask for help in aiding your journey for better healthcare. If you are told no, fight, and then fight some more. I asked a state senator to help get approved for my surgery. Her legal aid was able to contact people I didn’t even know existed. She fought for me and my family in ways I could not have even thought about. I owe a lot to her and am forever grateful.

With just a couple of months to live I received my surgery in October 2012. I was off all PH medications and oxygen for the first time since diagnosis. This lasted for six months and I started to clot again. My PH rebounded and I had to start back on PH medications and oxygen. By 2017 I was in left-sided heart failure, along with the right, and that was driving my PH. At that point I had to deal with the realization that I now have two forms of pulmonary hypertension and I didn’t think there was really anything else we could do differently. My fate was sealed.

Then in October 2018 I attended a PHA On The Road event and heard about BPA’s for the first time. This gave me a new hope and outlook on life. I will go through four rounds between January and April this year and I hope this will help me reduce my oxygen from 8L back down to two, have more energy to do things, and the most important, better quality of life.

Along the way I have met some incredible people and I am honored to be part of such an incredible community. I’ve been privileged to be a co-leader for a small PH support group with Deborah Webster. She is the ying to my yang and one of my biggest supporters. She has become a very dear friend. My sister is still my caregiver and is still my biggest cheerleader. She keeps me grounded. The most important thing though is I’m still here, still breathing, and still fighting. The longer we fight, the more drugs and procedures are developed, and that in turn will help prolong our lives. I truly believe in positive thinking and that negativity equals giving up. I’m no quitter and will continue to fight for myself and others with this rare incurable disease.