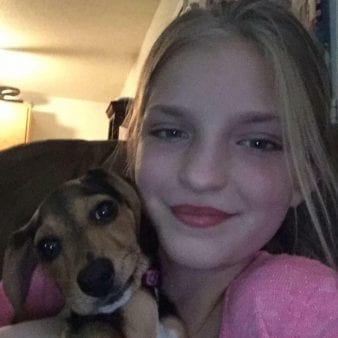 My Name is Mandy Howard, my daughter is Abigail Lynn Howard. She was diagnosed when she was 8 months old and she is now 12 years old.

It all started May of 2005, six days before Mother’s Day that year.

I had taken Abby to the doctor saying she wouldn’t eat or hardly drink. My daughter’s doctor at the time said she just had a virus, so he said take her home and push fluids, and that is what I did.

I had noticed 3 days later she still wasn’t eating or drinking much so I took her back to her pediatrician and again he told me take her home and push fluids, but this time I told him no, something is wrong with my daughter and I am not leaving until we figure it out.

He said ‘Amanda, I am going to need you to sit down’

He said ok we will do this: if she isn’t drinking by 5:30 pm today, I will admit her to Jeanie Edmidson Hospital and I said ok. I still couldn’t get her to drink so I called him at 5:30 and he agreed to admit her.

… your daughter is very sick

I drove her to the hospital and we hung out all night. The next day the nurse said we are going to be doing a chest x-ray and I said OK. I told the nurse I was going to go home to grab breakfast because I was hungry.

I was a 20 year old Mommy that didn’t have a lot of money. I no sooner walk in the door and the phone is ringing it was my daughter’s doctor and the next words out of his mouth made me freeze.

I rushed back to the hospital and a half hour later, Children’s ambulance pulls up and they have me hold her and buckle me in. I asked the EMT why they were hooking up all these monitors and such and he said your daughter is very sick. They had their lights on the whole way to the Hospital.

she looked at me with a look of horror and said ‘Get the nurse now!’

Once we got to the hospital they took us up to 4th floor and we were settling in but they wanted an IV, but my daughter was so sick that they couldn’t do it. So they had to put it in her head.

The PICU doctor asked me if I had a pacifier because it would help calm her down but for some reason I couldn’t find it. They ran her downstairs and the doctors said ‘sign this so we can incubate her or we will lose her.’

I signed the paper and they shut the curtains.

She seemed to do OK except when they suctioned her, then her oxygen levels would drop down to 25 or 30.

Later that same night, I remember her alarms started going off and then she coded. And they called a code blue. Once again we were escorted out of the room and they closed the curtains.

My Abby was down for 15 minutes.

I remember asking the doctor when he came out if she was going to be OK and he said we won’t know until later; your daughter was down for a long time.

I remember falling on my knees and just crying.

They finally decided to call in a cardiologist, Dr. Fletcher, and he decided to do an echo on her and the echo showed something so he said we need to do a heart cath.

I said so what do I do and he said you do what you feel will save your daughter but I think you should let me do the heart cath.

I agreed and she was diagnosed with pulmonary hypertension.

She was in the PICU for a month, and the second and third time for a couple weeks each.

My daughter at one time was scheduled to go to Houston, TX for a lung and heart transplant and this was slightly after a year old.

Thankfully she never had to go. I remember the doctors telling me that even if she got a lung the chances of getting both would be slim.

She had been really active with her school activities and running around playing outside, but the past few weeks she seems more tired than usual. We go on the 31st of August, 2017 to have another echo done to see what it going on.