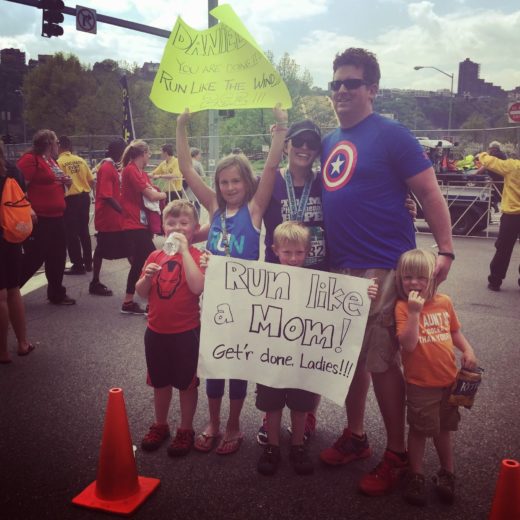 The following story was made possible by grit, and by the support of UPMC Sports Medicine. Two weeks ago, while attempting to run the North Face Endurance Challenge 50 mile trail race, I suffered some trauma to my right knee. The injury occurred at mile 36 and I was unable to walk, let alone continue racing. Team PHenomenal Hope racer Stacie finished the final 14 miles of my race, all the while pacing random strangers to help them achieve their 50 mile goal. After over 1 week of rest, and with the Pittsburgh Marathon around the corner, I tested my knee with a few running strides in my neighborhood loop. Severe pain shot up my knee, and I was faced with the very real possibility of missing the marathon completely.

Friend and teammate Patty George got me in contact with the professionals at UPMC Sports Medicine, a sponsor of Team PHenomenal Hope. They were quick to respond, and overcame some scheduling obstacles to get me in to be seen that afternoon. After some X-rays and other tests, we determined that I had injured my patella tendon – but all was not lost! I was given instructions on how to wrap – and support – my right knee cap, which effectively helped me avoid it “jumping out of place” and causing the severe pain. With that wrap, I was (almost miraculously) able to show up to the starting line, and share in the events of the story below…

Strangely enough, this quote from Noel Carroll was in my inbox this morning:

If people were possessed by reason, running marathons would not work. But we are not creatures of reason. We are creatures of passion. – Noel Carroll

And I can’t imagine something more fitting for the start of this story.

Danielle Lee Forcht was born an athlete. She was spry and energetic. Her only failure as an athlete was confidence. She bounced between sports and dance and cheer-leading, trying to find her groove, but (in my opinion) that lack of confidence in her abilities was a handicap she couldn’t shake, and she never really settled in on something to excel at.

Several years later, Danielle Lee Forcht became Danielle Lee Smith, Mother. Somehow, the transition to motherhood had finally given my sister the tenacity and focus and self-awareness that she’d been desperately missing before. Her body had nurtured and produced 2 kids at a time, then another! Most days, she managed to be fully operational and Pinterest-project-ready on almost no sleep, hanging onto sanity by a thread with the help of some K-Cups and a prayer. She was, by all intents and purposes, indestructible. Her passion for her children gave her superhuman powers; she just refused the cape and blue spandex.

About a year and a half ago, Danielle had set her sights on running. She was racking up miles at an accelerated pace. She was on the verge of turning 30 and considered the monumental task of completing a marathon – a dream for her bucket list. So, of course, I didn’t give her enough time to second-guess that decision and signed us both up for the 2015 Pittsburgh Marathon during early-bird registration. Done. Boom. No turning back.

Then, as is usual with us Forcht girls, disaster struck. Danielle injured her knee and her running was sidelined for months, although she managed to complete the Buffalo Half-Marathon last October. When she crossed the finished line (!), white as a ghost, she swore that was the last time she’d ever race again. I told her to give it a few days. The next day I got the message “I think I could have done better.” She was bit by the bug, and I managed to keep the marathon on her radar.

Marathon Sunday just so happened to coincide with the twins’ 6th birthday. So, the woman who’s priority one is her children was devastated that she wouldn’t be home to decorate the house before they woke up; their sleepy eyes wouldn’t open to a vision of streamers and balloons and signs carefully placed by their adoring momma. That tradition was sacrificed for the chance for that mom to show her boys something amazing. To show them that what was possible when they put their mind to something. Still, she worried about the boys and their birthday party decorations (which were being transported to my house for the post-race party). She worried about their little faces not being plastered with smiles for 24-hours straight. She worried so much about everything else that she showed up to my house with hand-made arrows and fake clouds and posters of the world – but no running shoes. Luckily, Dicks was open late. Her excursions in barefoot running were put on hold.

The forecast called for sunshine and some heat. All in all, it was the perfect day. Tens of thousands of runners lined the streets of the city, and the Forcht sisters among them, drinking in the excitement and trying to shake out the jitters. We talked briefly about trying to keep a pace, but the name of the game was forward progress. And so we did. All was going well until about mile 14, when Danielle got her first charlie horse and her knee started throbbing. We tried to stick with the 6-hour pace group, thinking we could steal some their mojo and keep on track. I knew that Danielle could fight through the cramps. Even if we had to walk the rest of the way, I knew she could finish. We just desperately wanted to stay ahead of the pace deadlines and the sweep van. The cramps got worse and more frequent, and were accompanied by some dizziness and stomach troubles, so we had to slow down and make a go for it ourselves. Danielle ran into a Walgreens to use the restroom and I got her some salty snacks that I hoped would ease the pain. Then, I force-fed my adult sister peanut-butter filled pretzels.

We found my teammate Patty George on her bike just before the “big downhill” section into the Strip District. She provided some encouragement and some salt tablets, which I can only believe supported our big push to the finish. A few miles later, we saw my husband and brother-in-law, camera-ready with big smiles and bigger cheers. They witnessed me shooting a beer with Danielle around mile 23 at the Church Brew Works and then stalked us to the finish line on their bicycles. It almost made me cry to see them and to know what it meant – we were close.

We weren’t able to run again until we were downtown and just about to round the corner to the finish line area, but that run came easily – months of anticipation, hours of joy and suffering finally coming to a close. I was overcome with pride, knowing so intimately all of the obstacles that my sister overcame to bring her body that full 26.2 miles. I have never been more impressed, but at the same time, I knew that was our destination all along.

They hung some very legit, heavy metals around our necks and gave me a bag of kettle chips that I completely destroyed. After we got through the finish line chute, a victorious mom was finally reunited with her birthday boys, who were – only at that exact moment – “allowed to turn 6.”

May 3, 2015 was a huge day for a lot of people. I want to extend a HUGE thank you so Team PHenomenal Hope and our sponsors for supporting this effort, and for our teammates and volunteers (including my dad!) who worked the Mile 8 Aid Station like champions. A GIGANTIC thank you to the city of Pittsburgh and its citizens, the marathon staff and volunteers who provided the backdrop for this amazing event. And again, my utmost gratitude to Patty and the docs at UPMC Sports Medicine for helping me get to the starting line on Sunday morning.

Next Saturday I will try for 50-miles once again – a redemption run. It’s the Glacier Ridge Trail Race in my hometown of Butler, PA. When I feel like I have reached the bottom, I will look back on my memories of the Pittsburgh Marathon and my sister’s perseverance, and know – all things are possible.

“Happiness is different than pleasure. Happiness has something to do with struggling and enduring and accomplishing.” – George Sheehan

2 thoughts on “Achievement. A Marathon Story.”