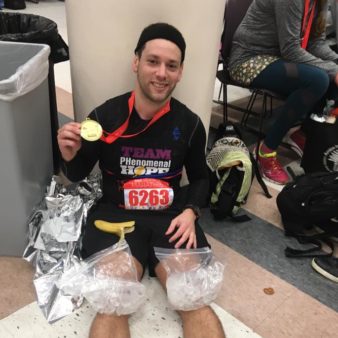 Visit Anthony’s fundraising page to make a donation to his efforts here.

My mother, Mary Jo Piatek, passed away in July of 2013 due to a disease called pulmonary hypertension (PH), which is abnormally high levels of blood pressure in the lungs that places an excessive load on the heart. Untreated, PH is incapacitating and sometimes fatal. She was diagnosed with idiopathic (no known cause) pulmonary arterial hypertension in early 2010 but may have had it many years previously without it being properly detected. She was later discovered to have had a second disease: scleroderma. Once diagnosed, her life went from being a busy wife and mom working full-time, to being on a life-saving drug that had to be administered intravenously (IV line directly to her heart) along with being connected to oxygen 24/7.

PH is extremely rare affecting an estimated 50-100 people per million. The exact number is not known because it can be associated with other diseases. Rare as it is, PH does not discriminate. It affects people of all ages, races, and ethnicities. And, as a rare disease, it attracts much less attention and financial aid from the government, pharmaceutical companies, and the medical community in general than other more common diseases, nor does it have the visibility with the media.

The symptoms, such as breathlessness, chest tightness, limited exercise capacity, and fatigue are common with many other conditions. At the beginning of the disease, generally, the symptoms are only exercise induced. Therefore, PH often goes undiagnosed, or more commonly, is misdiagnosed as asthma, lack of physical fitness, or COPD, among other things. Diagnostic testing for PH is often fairly involved requiring a cardiac echo, EKG, and for conclusive results, a right heart catheterization. As a result, people can go for years without proper treatment, which could be fatal.

In 1995 a person diagnosed with PH was told they had a maximum of three years to live. Today, fortunately, that lifespan has increased with the introduction of many new treatments that help to stabilize patients for much longer periods of time. However, there is still no cure. We all stay in faith and hope that one day there will be a cure.

On September 26, 2021, I will be running the Quad Cities Marathon which will be my 13th marathon in the honor/memory of my Mom. She fought so hard each day to battle PH that makes running 26.2 miles seem like a very simple task. She continues to be my inspiration everyday as I’ll always remember how she took on the disease with such resiliency. She was loved and adored by so many and was ALWAYS in good spirits and brightened everyone’s life that she was a part of.

As a charity, Team PHenomenal Hope seeks to: raise awareness of PH, fund medical research into improved treatments or a cure for those who suffer from it, and implement programming that focuses on providing patient services, including removing patients from isolation, building community, and providing hope.

To make a donation to support my efforts, visit my fundraising page on GoFundMe here. Donating is simple, fast, tax deductible, and totally secure. Many thanks for your support — and don’t forget to forward this to anyone who might be interested in donating.

Visit Anthony’s fundraising page to make a donation to his efforts here.