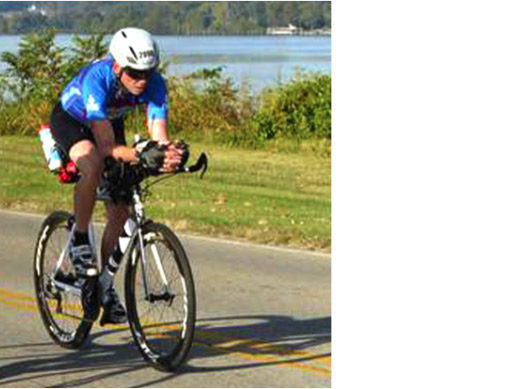 A few weeks ago I went to the new UPMC Lemieux Sports Complex for a bike fitting by Matt Tinkey, head of the UPMC Sports Medicine’s Cycling Performance Services. I was having shoulder and neck pain on long rides and needed some help with my bike fit ahead of Ironman Louisville. I was also curious what Matt could do for me that my local bike shop couldn’t. Below is the list of services included in the bike fit taken from the UPMC Sports Medicine Website:

For time trial or triathlon bikes, extra time is allotted to achieve a personalized aero position fit. All bike fits include a follow-up visit within 60 days.

What stood out for me immediately was the in-depth interview and the structural analysis and basic flexibility assessment. Previous detailed bike fits I’ve had always included some kind of interview but Matt’s was definitely more comprehensive. I felt like at the end Matt had a really good idea both of where I was coming from as an athlete and cyclist as my short and long-term goals in the sport of triathlon. I also found the structural analysis/basic flexibility assessment to be very thorough compared to previous bike fits I have had which included little if any such assessments.

Another standout for me was the state of the art video capture system used by Matt to analyze my mechanics on the bike. This system captures live video of the cyclist while pedaling and uses algorithms to measure joint angles at various points in the pedal stroke (Matt also measured some of these angle manually to ensure accuracy). While apparently similar to Retül technology, which records the movement of reflective stickers placed on the rider, Matt was quick to point out the advantages of the system he is using. Unlike Retül, the system used by Matt allows him to very simply go back and alter where the angle is being measured. Also, because it is video, he can show side by side before and after videos and explain how the changes he made changed your cycling mechanics. Good stuff.

So what changes did Matt make for me? Well, I’m happy to say that my previous fit was very close in terms of seat height and fore aft position. The major changes Matt made were to the stem length on my bike adding 2cm, and position of the cleats on my biking shoes. He also made slight adjustments to my seat height, and the angle of my aero bars.

You can see from the pictures the difference adding some length to the bike stem made. The photo below of me in the black racing kit is a picture from Rev3 Florida last year. You’ll notice how rounded my back is and how I have to strain my neck to look forward.

The photo of me riding in the blue racing kit is me racing Ironman Louisville. While the angle isn’t as good I think you can see a big difference. My back is now much flatter which allows me to look forward with much less neck strain.

The change in cleat position was also a difference maker. Matt moved the cleats from the ball of my foot back towards the middle of my foot. Matt explained that for a triathlete, who needs to run after the bike, moving the cleats back like this would disengage the calf muscles keeping them fresh for the run. I had never heard this before so I researched it later and found that many top bike fitters do the very same thing.

Both of these adjustments to my bike fit paid immediate dividends. That following weekend I was scheduled to do a “brick” workout (bike followed immediately by a run) which for me was a three hour bike ride at race pace followed by a fast 10k off the bike. Not only did I experience less neck and upper back pain but I probably had my best brick run ever. I have also since then completed Ironman Louisville, my first full distance triathlon, and did so feeling great. Thanks Matt!