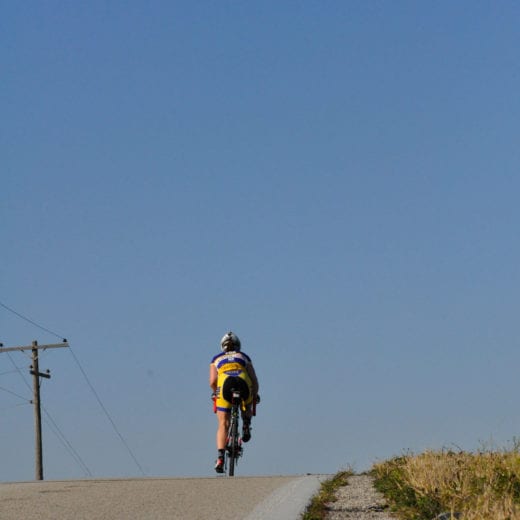 I ride my bike to find my soul, to free my mind, to free the child inside.

I ride my bike to feel one with nature and the universe.

I ride my bike to balance the chemical imbalance inside my brain, it calms me down, it makes me happy, even when it is hard, when it hurts, as if the pain sets me free.

February 14th, 2015 6:30am: I am standing at the start of my 2nd Bike Sebring 24 hour non-drafting ultra event. This year, I am proud to wear the cycling kit of Team PHenomenal Hope, to raise awareness for people who live with Pulmonary Hypertension, a treatable but incurable disease.

Patricia George, team founder, who finished RAAM on a 4-person team in 2014, came all the way from Pittsburgh to support and crew for me. I was also excited to stand among elite ultra cyclists like Marko Baloh, Valerio Zamboni, Chris Hopkinson and many other RAAM finishers.

It was a cold start with 35 degrees but every two hours the temperature rose 10 degrees until it was around 65 for the high of the day. I split the race up in two, 12-hour blocks, and my goal was to ride as many miles in the first 12 hours while it was daylight and warm. To the best of my abilities, I rode the first 101 miles at an average speed of 19.2 mph (same as last year). Patricia had followed me by car, taking pictures on the side of the road and providing me with chocolate milk at the 55-mile checkpoint.

The next goal was to ride 9 laps of the 11.7-mile short loop for another 105.3 miles. During those eight laps, Patricia and her friend, Kathleen, followed me by car, taking picture after picture and kept cheering me on. It truly gave me a push in the late afternoon when my legs started to get tired.

After completing eight of the nine laps, I had to put back on warm clothes and hook up my Garmin battery. Also, the cheers in the pit area from other crew people – Jacquie Schlitter from Vite Bikes and a lot of other people – inspired and motivated me to stay on schedule. Luckily, it was not as windy as last year, so I managed to finish the nine laps at an average speed of 18.4 mph and an overall average of 18.8 for the first 206 miles.

I knew I had to average at least 19mph going into the night to shoot for 400 miles. That goal was going to be difficult to reach, however, I was 0.6 mph faster than last year, an improvement overall.

After three laps on the 3.77 mile racetrack, I took a long break (too long) to put on all my winter clothes, booties, bike light and ate. It was already dark, and I told Patricia to have a couple hours rest, because I was going to need her encouragements after midnight.

Compared to last year, I forced myself to stay on the bike for 10 loops before I took a break. Thanks to Paul Carpenter’s advice I had bought a second head light (Fenix BTR20) that I mounted over my aero-bars. This way it illuminated my Garmin to keep an eye on my speed that progressively slowed down.

Most of the night is a blur, but at one point Cassie Schumacher (RAAM 2013 solo finisher) and Maria Parker (RAAM 2013 solo finisher) from 3000 Miles to a Cure were there to encourage me and cheer me on. It truly lifted my spirit to hear them shout at me every time I passed the pit area. Not to forget to mention Rob White, who crashed and broke his collarbone earlier in the day, stayed up all night to encourage all of us lap-after-lap, while he was probably in terrible pain.

Around 5:15 am, I finally reached last year’s distance of 372 miles. 400 miles was out of reach and I started whining. But whiners don’t win and winners don’t whine. I kept saying to myself “Suck it up, buttercup; this is for Patricia George and Team PHenomenal Hope.” With 14 minutes on the clock, all of a sudden I found the energy to go faster. One more turn, one more turn … until the last turn … with the buzzer going off, I did the 49 laps I had promised myself to do.

With 391.5 miles, I broke my own 50-54 age group record. By doing so, I want to inspire women in their 50’s and older. I am not super talented or physiologically gifted, because it took me three years and seven, 24-hour races to accomplish this goal. But it has been a wonderful journey, because what is more important to me than the statistics are the people I connected with, as well as the love and passion I share for ultra cycling.

Yes, my heart burns with fire on the bike, but now I want to share that fire with other people of the bike. I hope to inspire Team PHenomenal Hope and the PH community with this first race. There is a lot more to come this year.