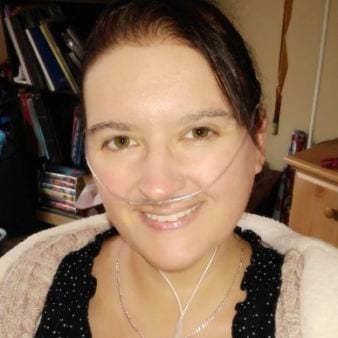 The first part of my life was awesome, for the most part. I joined the rescue squad and became an EMT at the age of 16. I became a phlebotomist at 18, then a nurse after that. I was relatively healthy during that entire time. When I was 20 years old, I went to pick my mom up for my first sonogram of my daughter, and I found her on the bathroom floor. My mother had passed away while getting ready to leave with me. It was one of the hardest days of my life. No one ever did an autopsy on her, and in hindsight, I wish it had been done because I might have answers today, as well as to pass along to my daughter.

I’ve had a total of 13 pulmonary embolisms and two retinal artery occlusions in my left eye. My first round of emboli was September 2015 and I thought I was going to die because I put it off so long before going to the emergency room. This repeated about every four to six months, changing anti-coagulants, and trying to find the cause of the clots. Then three years ago, I went from enjoying life without hesitation, to struggling to catch my breath just walking around. Over the next year, I slowly started noticing my symptoms worsening, until October of 2017 I was taken to the hospital in acute heart failure. From then on came referrals to a cardiologist and a new hematologist, loop recorder insertion, IVC filter insertion, right heart catheterization, stress tests, and more.

I received my diagnosis of chronic thromboembolic pulmonary hypertension (CTEPH) on December 6, 2017. I had a teenage daughter, Mickie, to think about; I didn’t want her growing up without a mother like I had to. So I began the treatment for CTEPH and started working from home. I met my now fiancé, Eric, and when I told him I was sick, I gave him the full option of running for the hills, but he chose to stay and stick it out with me.

Mickie and I moved in with Eric in November 2018. It is a cute little house nestled in the mountainous country. We have five adorable cats, Thumper, VooDoo, Waffle, Dementia, and Lucifer. And each animal comes with a wonderful story.

I have an absolutely amazing daughter who will be graduating high school in May 2020 and going to college to major in criminal justice with an emphasis on forensics. She has an amazing work ethic, as she attends school and works almost every day. I cannot be more proud of that amazing girl. She is my only child and she amazes me every day. My goal is to see her graduate high school and hopefully college as well. She is my true inspiration!

If I could give anyone any advice about CTEPH, it would be not to brush it off. If you’re feeling something that just doesn’t sit right with you, contact your doctor. It’s OK to get a second opinion, just to make sure. Some people, like me, will brush it aside as long as they can, and blame it on stress, being too busy, and not having enough time, etc. However, if you don’t get checked, you definitely may not be around at all.

If I could change anything, it would be to educate more providers about this. CTEPH isn’t recognized by many healthcare providers in my experience. If you go to the ER or an urgent care facility, you have to take time to explain what CTEPH is and the medications you take. It can be frustrating, but there are doctors who will take the time to listen to you.

One of these days I hope to get out and kayak again, or play tennis with my daughter, or just go hiking through the mountains and enjoy the view. It’ll happen, it just takes time.

Kristin is a recipient of the Team PHenomenal Hope Unmet Needs Patient Impact Fund. Learn more about how this fund supports PH patients and make a donation at teamph.org/unmetneeds.