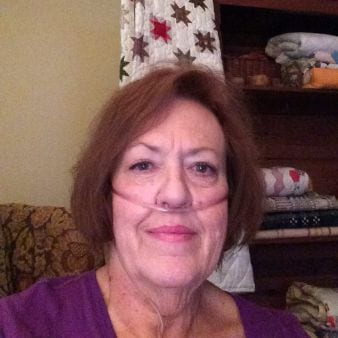 My story about Idiopathic Pulmonary Arterial Hypertension began in the summer of 2012 with obvious symptoms. I had always mowed my yard, but that summer it was taking me twice as long to finish as I had to stop one to three times on each trip across the yard just to breathe. Also, while visiting my brother that summer, I took off on a walk and thought I would never make it back to his house. There was a very slight incline on the street, but I was setting a goal for myself to not stop until I reached the next mailbox. Then I would sit on the curb and try to catch my breath. I didn’t always make it to the next mailbox; I would have to stop sooner than that.

As fall began a new school year, I saw the school nurse had a pulse oximeter out one day, and I asked her to check mine (I just had a feeling!). She checked one finger, then another, and another, and then a toe and told me I needed to see a doctor. My pulse ox was at 79. I got in to see my former primary care physician who put me on oxygen in the office and then sent me for a CAT scan. Several days later, some random person from his office (not him or his regular nurse) called me and told me I needed to see a pulmonologist, but if I wanted to see one in town it would be February before I could see someone (this was mid-October).

My response was that I didn’t think so, and I sought out my own Pulmonologist in St. Louis. My first visit with him was November 6, 2012, and by December 18, all the testing had been done including a sleep study and a cardiac stent placed along with the diagnosis of IPAH. I had already begun oxygen therapy along with Sildenifil. I began cardiac rehab in January, 2013.

The severe anemia has continued, and I have to get iron infusions on a regular basis. I see a hematologist on a regular basis who is convinced I must be bleeding somewhere, but no testing reveals anything significant. There still is no explanation of the cause. Whether it is related to the pulmonary hypertension is unknown.

The pulmonologist I was seeing wanted to refer me to a pulmonologist who specializes in PH, and I had my first visit with Dr. Murali Chakinala in May, 2014. I feel very fortunate to be treated by Dr. Chakinala at one the PH Centers he was instrumental in setting up throughout the country. Dr. Chakinala continued with the oxygen therapy but changed my medication to Adcirca which seems to be working well for me.

I feel fortunate that my PAH seems to be under control for the present. But my hope, just like that of every other PH patient, is that a cure can be found. Awareness and research are key to the success of finding that cure.