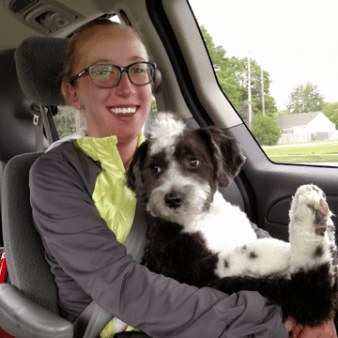 I was diagnosed at the age of four with Pulmonary Hypertension (PH). My parents, mom a nurse and dad a facilities engineer, tell me that they knew something was wrong when I was out of breath while biking.

The pediatrician did not know what was wrong so he referred my parent to the University of Michigan. My parents tell me that they were about to close my Atrial Septal Defect (ASD) or a hole between my two atria in the heart when a fellow who had studied PH recognized that my pulmonary pressures were super high. From there, everything in our world changed. At the age of four I was put on oral Procardia which would help keep the disease at bay and my pressures low making it possible for me to breathe better.

Growing up, my parents never restricted me in what I could do, which was something that would help me in the future. In grade school my health declined. Instead of accepting the doctor’s diagnosis of death, my parents desperately looked for another solution to suspend the disease progression. They found one at Columbia Perspiration Hospital in New York. The doctor there said that for me to be cured of PH, I would have to have a full heart/lung transplant, but she offered another therapy that again would allow me to live and keep the disease at bay.

At the age of nine, I was put on IV medication through a permeant central line, a line in my chest, and multiple oral medications. The central line was the first of many that I would receive over the years. Life went on as usual as possible. I ended up having multiple pneumonias, a thyroidectomy (excision of the thyroid) due to a side effect of one of the medications, and a tonsillectomy. With each surgery or illness, family life was disrupted since most of my medical care had to be done in New York because the local doctors did not feel comfortable treating me.

Throughout high school my parents supported me as I participated in theater, tennis, and band. Each year that the medication gave me was a blessing. I graduated high school and was admitted into Calvin College, a local college in Grand Rapids Michigan. Throughout my college career I was mostly stable, but then it happened again. I began to decline just a year before graduation.

My parents and I had considered transplant but I was not ready, there had to be other treatment options. My doctor in New York had retired so we started looking for another doctor who was just as great as the first doctor. We finally found a doctor in Boston, and there I was stabilized again through more pharmacological advances.

With this, I graduated the nursing program at Calvin College with a BSN in 2013. After graduation I found a job as a nurse for four to five years in the local hospital as part of the general operating room staff. I love my job, and I love helping people as a nurse.