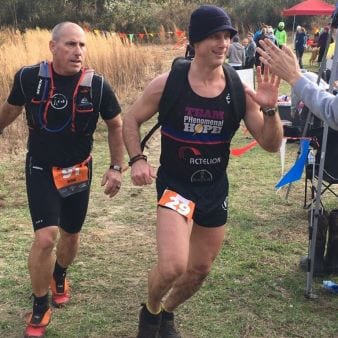 It wasn’t that cold, and the sun was rising – always a reassuring combination at endurance events like the recent Southern Tour Ultra 50K in coastal Hampstead, North Carolina. My buddies and I were busy setting up tents and banquet tables with food and drink in the staging area, generally preparing one another for the next five to six hour running event. We’d trained for months since completing a 200-mile relay endurance race back in September. We figured this would be a day in the park.

The gun went off, and into the woods we went. One of my buddies said he was going to try for an 8:45 minute mile right out of the gate. Dave and I decided we’d start considerably slower (“Let him go,” we said), as we’re both “bigger boys” and had no shame in letting the other skinny “shivering whippet” runners speed by.

Pine straw, sand, mud, some grass, and a few marsh crossings composed a five-mile loop. Run it six times and you have your 50K, or 31 miles and some change.

My buddy Dave had been training so hard for the event, and I’d promised to stay at his side, brothers in arms – despite my having placed near the top of the pack the two previous years. I was resolute in my decision – this race would be a lesson in ego, not endurance. Could I stay with my wing man? Could I manage my ego and put my buddy before myself? Moreover, what would I learn?

About lap 2, Dave started developing some problems – an ankle, then a hip, then a calf. We started a stop-and-start pattern which concerned me. You see, in these kinds of races, if you start giving your body mixed signals, then you’re doomed. Your body doesn’t know what to do and it starts fighting against you like a wild horse.

I have to admit, I tried a few less-than-kosher tactics on Dave, a former paratrooper, to try and re-start him. I hunkered in beside him and got in his face; I played a bunch of old Army cadences about guys jumping out of C130s with M-16s; I even had my hand on his lower back occasionally, as if to drill-sergeant him through the next 100 yards. Alas, none of it worked.

So, I switched gears to Yoga Man – yeah, a complete 180-degree turn, based on my years of doing yoga for mental health reasons. If we weren’t going to do it the hard way, then maybe we could do the soft(er) way. It went something like this:

Dave, hey dude, let your shoulders just drop. Now breathe in through the nose and out through the nose – concentrate on the breath. Find a point in the not-too-far distance and concentrate on it. This is a judgement-free zone. Scan your body for pain points and just acknowledge them – you don’t have to do anything about them. Just let them – and yourself – be. Now, c’mon, let’s move.

These light, ethereal mantras went on as the miles passed. Funny, but for all the years I’d known Dave – for all the times he’d swung into my neighborhood at 50 mph guns blazing and American flag waving – it was the gentle way that Dave responded to. News to me.

The even better news was that after six and a half hours of running, we finished. And most important for me was that we finished together – in fact, our run times showed we crossed the finish at the same time.

In a post-race photo my wife took, I stand with Dave with my arm across his shoulder. If you were to ask me what we were thinking, all I’d say is, we were just standing there breathing. Just breathing. 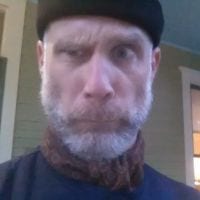