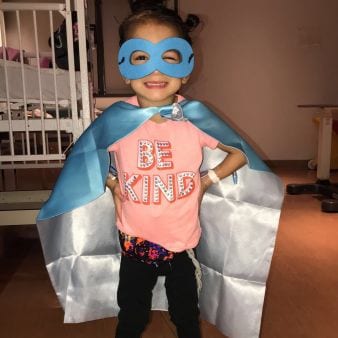 My name is Ashley Jeffery, and my daughter’s name is Gabriella Jeffery. She is three years old and has severe idiopathic pulmonary hypertension (PH). We live in Pearland, Texas, which is about 20 minutes outside of Houston. We found Team PHenomenal Hope through Facebook. Some of the other PH moms are a part of this group, including Pamela McKinney and Nikki Linscott. I read about this organization and thought it was really cool, so I figured I would see how we could get involved.

Ella was born at 23 weeks (four months early) and weighed one pound, two ounces. She has a twin. Since she was born so early, she experienced Grade 4 brain bleeds. These bleeds created some damage in her brain, and her cerebral spinal fluid would not to drain. This, in turn, caused pressure in her brain and hydrocephalus. She had to get a ventriculoperitoneal (VP) shunt, which went from her brain to her abdomen, to drain the cerebral spinal fluid so her body would absorb it or get rid of it .

In the beginning of 2017, Ella was having episodes we thought were seizures caused by her VP shunt. But her neurologist didn’t think what was going on were true seizures because her lips would turn blue. Now, looking back, they were all classic symptoms of PH. She had an electroencephalogram (EEG), a three-day EEG, and an MRI, all of which showed she wasn’t suffering from seizures. Our neurologist thought it might be Ella’s heart and that she might be having fainting spells due to an underlying heart condition.

In August of 2017, we saw a cardiologist, and when they did the electrocardiogram, her right heart pressures were at 90, so they referred us immediately to a PH specialist. We saw the specialist the following week. Since Ella was already having fainting issues due to the severe PH, they wanted to treat her immediately. She was diagnosed on with PH on August 23, 2017, which is also her birthday.

We had originally planned for Ella to be hospitalized and start treatment on subcutaneous Remodulin, Sildenafil, and Tracleer two weeks later since that week was her birthday. But, because of the impending Hurricane Harvey, the doctor didn’t feel comfortable waiting because Ella was already having syncope. They wanted to make sure she was safe in case there was no way we could get to the hospital due to the hurricane and possible flooding. Ella was hospitalized the next day to start treatment.

And now we are here, still PHighting and hoping that one day there will be a cure. It’s definitely been a huge life change, but she’s doing well, and I’m glad we found out what was going on before something really bad happened.

Thank you for taking the time to read her story.