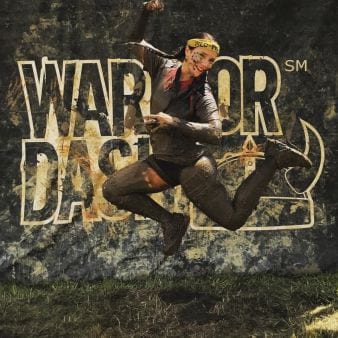 The bulk of my season has been training for my first marathon, the Fox Valley Marathon in St Charles, IL on 9/17/17. On 7/11/17 while running before work, I rolled my ankle while transitioning on a trail from sidewalk to fresh mulch. Being the ER nurse I am, I treated it as a sprain, though it hurt very much and swelled and bruised. I gave myself 10 days off to heal, then attempted to run again. It swelled up terribly.

I decided to get an x-ray which showed an avulsion fracture of my left tibia as well as a pretty bad sprain of surrounding ligaments. After following up with an orthopedic sports medicine doctor, I learned I chipped a tiny piece of my tibia off so we just treated the sprain with rest, ice, elevation, and an air cast. I took 2 more brutal weeks off, and then returned to attempt a race in Oswego, Ill. “I Tried a Tri”.

This was the final “I Tried a Tri” and the second time I had attempted it. This mini triathlon consists of swimming 250m in a pool, biking 10k, then running 2.1 miles. When I did the race last year, it was on a whim and I borrowed a bike from a friend. The chain fell off three times in my first mile and I had the worst bike time in the entire race. This year I vowed to improve.

My doctor advised that swimming and biking would be safe for my ankle, but to be cautious running. Surprisingly swimming caused the most pain, pushing and pulling against the water resistance. I completed my swim and hopped on my new bike and completed without difficulty, passing many along the way. Mission accomplished!

The running portion I took easy. I did not want to risk worse injury as I still had hopes for my marathon. On my path I got to run by my Aunt Lynn Bastian’s house, my #LetMeBeYourLungs partner. Lynn and my cousin came out to cheer me on, and it boosted my spirits to pick up the pace. Crossing the finish line and completing the triathlon was a huge sense of accomplishment, considering I had been on crutches two weeks prior. It was not a record by any means, I believe I finished 10th in my age group, but I was proud that I came back to complete it.

The next Saturday I geared up for my favorite sport, muddy obstacle course racing. I recruited a friend who had never run one, and turned him into an addict as well. We tackled the Warrior Dash in Channahon, Ill. I taped up my ankle so it was well supported, then we headed out to the trail. We completed 3.1 miles and 12 obstacles in 42 minutes.

Obstacles included climbing cargo nets, crawling through dirt trenches, ring rigs, climbing walls, sliding into a giant pool of muddy water, then finally crawling through thick sloppy mud under barbed wire to the finish line. There were a lot of hills on the course and I was again cautious to preserve my ankle for more training. We had a blast and no mud was left behind.

Since completing these two races my training has focused on road running. I’ve been keeping to flat, paved roads to keep my ankle as healthy as possible. We’ve been running a lot through the corn and bean fields of Earlville, Ill. People get a kick out of seeing us run for hours. 10 days and counting! 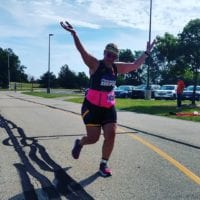