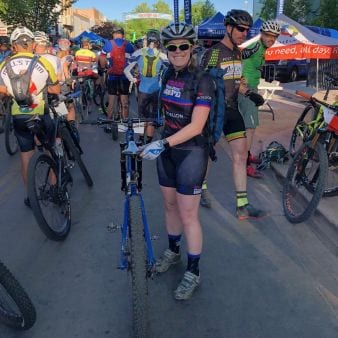 I’ve found something I’m really bad at, and I’m pumped.

Today was my first real day on a mountain bike in 2018, and while I felt okay fitness-wise, this race rocked my world.

After the Silver State 508 last year, I took a hiatus from the road bike and decided this year would be the year of the mountain bike. I signed up early for the Grand Junction race from a flyer in the race packet from Fat Bike Worlds. I decided I’d do this before the American Thoracic Society Conference I was to attend, and made sure to prioritize some bike time in Colorado.

However, this winter and spring leaned a lot more toward work and less toward getting out on the bike. I had managed to get in my 4 a.m. weekday Peloton workouts as much as I could, but I didn’t get any mountain bike time until this race.

So my first real mountain bike ride of 2018 would be a race, and not just any race, but a backcountry one out on the Colorado Western Slopes. Sure, I was in. I’d power through it.

Grand Junction is a gorgeous area, and this weekend, it was full of cyclists ready to tackle their epic rides. The vibe of the town was hopping and included a live music festival throughout the weekend. It helped calm my nerves, even though after I had picked up my number, I did wonder what I’d gotten myself into.

On the morning of the race, I woke up at 2:30 a.m. I used the extra three hours to finish up some work from the week to clear my slate and my mind before the race. Then I grabbed breakfast and went off to the starting line. I was optimistic, but had no idea what lay ahead.

At the start, the racers took off on the roads, heading to the trail and course. Then we hit double track dirt to a single track up, up, up into the desert mountains of the open space outside Colorado National Monument. The climbs were legit, with rocks and boulders everywhere, and sometimes one had to get off and walk. But it was later in the course, on the path called Butterknife, that my soul was almost crushed.

It’s hard to explain the technical nature of this course, and how intimidating it was to me, from the ridgeline trails (with mountainside drop offs) to the rock gardens, drop offs, and sand. I found myself walking my bike a lot more than I’d planned. This was a far cry from last year’s race at Castle Rock on a flowing, rideable course. This course was raw and beautiful, and I was in awe of the athletes who zoomed down the trails and muscled over boulders to crush it. 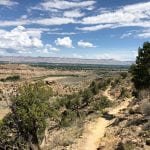 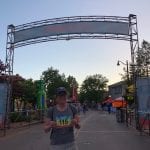