My Son Eben’s 101 Days in the Hospital 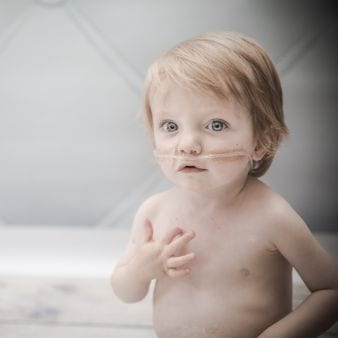 My son Eben was born with a condition called Bochdalek Hernia, in which there is a hole in the diaphragm and the abdominal organs move up into the chest cavity. It is a very rare condition, especially because his liver also moved up, and this only happens in 2% of the Bochdalek cases.

Eben was born on April 2, 2013 at 38 weeks and was immediately put on an ossillator (a type of ventilator) to help him breathe in the Neonatal ICU. After three days, he was stable enough to operate on. The doctors were able to move his liver and intestines into correct positions, and repair his diaphragm with a prosthesis.

After the operation, he started struggling with pulmonary hypertension, common in Bochdalek babies because their underdeveloped lungs basically go into stress. The pressures in his lungs were extremely high, the highest our pediatrician had ever seen (he primarily works with very sick babies). They increased to about seven times higher than normal and prevented his heart from pumping enough blood into the lungs to supply his body with sufficient oxygenated blood.

They gave him all the medicine they could, but his condition kept worsening, and they had to increase his oxygen to almost 100%. The pediatrician was very concerned and recommended that we try a type of medication that is not approved in South Africa to try to lower the pressure in his lungs. The medication had no effect on him and his condition worsened even more. He became very critical; he was permanently on 100% oxygen and started to run very high fever. His internal systems started to crash from time to time because of this.

The severely high pressures remained a huge problem, and it was life threatening. Eben was critical and the medical team had only one suggestion left: try nitric oxide. They warned us that the medical insurance would probably not pay for it. This treatment was very expensive, and we had to give permission for them to use it as it is not yet approved in South Africa, but it was our last resort. Initially he responded to the treatment. We were delighted, as they started the treatment on a night they were skeptical he would make it to the next morning.

Soon his body got used to the medicine, but he did not respond to it positively, but if they tried to wean him from it, his body would crash. This continued for weeks and he progressively became weaker and weaker and the doctors lost hope as their medical options were exhausted. There was nothing more they could do for him, and he was very fragile. But as time passed he became stronger and stronger and all the medical staff spoke of this miracle baby. Eventually we could wean him off the nitric oxide and all his other medicine, one by one, as he had become addicted to the strong substances. His body had heavy withdrawal symptoms for about two weeks.

Eben was sent home to Pretoria with oxygen, and the medical team warned us that he would be behind with his developmental milestones because of his 101 days in the hospital, 98 of which were in the ICU. Thankfully, he did well with his milestones, but his muscles took time to recover and catch up with the walking and physical development. We had some feeding challenges; it was such a struggle to get him to eat enough to actually gain weight as his body was using so much energy to breathe.

When he turned three years old, we moved to Cape Town, and since then he has been able to go on short trips without oxygen and even go to school without oxygen. The sea level altitude has made a massive difference to his ability to breathe sufficiently, and this has helped him to grow and function better. He recently celebrated his fifth birthday and he is doing so well! 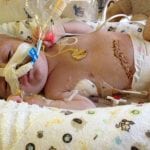