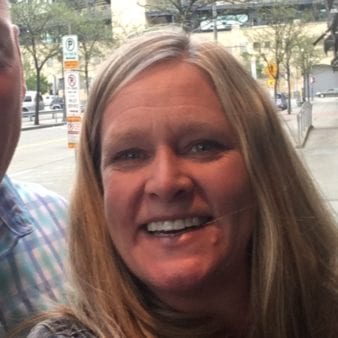 In 1997 my mother was diagnosed with a disease we now know as pulmonary arterial hypertension. Unfortunately, at that time, very little was known about the disease and doctors had very few options for treatments. After a short battle, my mom passed away at the young age of 41. At the time I had no idea that the loss of my mom wouldn’t be the only way this disease would change my life.

In January of 2013, I was 34 years old and I started the year out with a typical New Years’ resolution to be healthier, exercise, and run a 5K. I was finally sticking to my resolution and by June I ran my first 5K, despite not really enjoying running all that much. I continued to keep up with my healthy ways by walking, using stairs instead of elevators, and eating healthier. Physically, I felt I was in the best shape I had been in since my early 20’s. However, things would soon change dramatically.

On a Friday in September, I was walking up the steps in the parking garage at work when I exprienced a strange shortness of breath. I decided I would call my doctors’ office to make an appointment, but they were already closed for the weekend. I told my husband about the unusual feelings and asked him to remind me to call the doctor on Monday morning. Little did I know, Monday morning would be too late.

The next day we attended an outdoor wedding and I just didn’t feel well at all. During the wedding reception, I had slipped and fell, knocking the wind out of me. Again, I couldn’t catch my breath. I stood up but then fell again, proceeded to pass out, and appeared to have a seizure according to my friends. After I came to and had my senses back, I knew at that moment I was going to be diagnosed with PH. I was suffering from the same symptoms I remember my mom having 16 years ago.

Despite not wanting to leave the reception, I did head to the Emergency Room on the urging of our friend, who was an EMT. Once at the ER, I pushed to have a visit with a cardiologist because I was sure of the diagnosis. The ER doctors felt that I was “way too healthy,” and that I was “way too young to be diagnosed with that disease.”

Finally, after some further discussion, the doctors agreed to admit me and get a cardiologist to order additional testing. I was officially diagnosed with PAH from a cardiac catheterization on Monday, September 16, 2013, and immediately was referred to UPMC Cardiovascular Institute to begin treatment.

From the moment I had my first syncopal episode, I was sure I was going to die. I was unaware of the research, new and improved treatments, and the plethora of medications that had been developed since my mom had passed. I am very blessed to have the support of the PH doctors and nurses that have dedicated themselves to treating this disease. Their knowledge of the current research and the latest treatments and medications have helped me regain my life, albeit with some modifications. I continue to walk regularly and stay active and work full-time. I am able to enjoy time with my family, friends and continue to travel regularly.