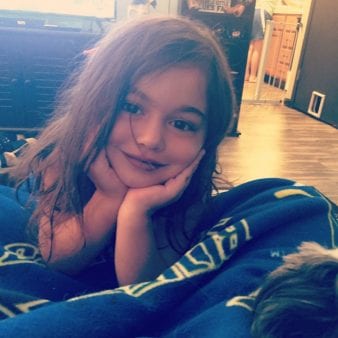 In November of 2015, we heard the words that would forever change everything about our lives—pulmonary hypertension (PH). Suddenly, we went from having a healthy child to having a child who was fighting for her life, all with one diagnosis.

The first three years of Haylee’s life, we watched her grow, meet milestones, and develop a magnetic personality. There were signs we would later learn we didn’t take seriously enough, but how could we have ever known?

She had several colds that seemed to linger longer for her than other kids. We thought maybe asthma was the cause, but it was ruled out. Then there was the fact that she never really ate solid food until about her third birthday. Milk and formula were pretty much it. She also vomited a lot, usually two to three times a week. We thought maybe she had a food texture issue, but we saw an ear, nose, and throat specialist who said everything checked out. Despite all that, Haylee grew on a steady pace as her older sister had done years before.

Another sign, perhaps, could have been her restless nights. Out of all three years, she had slept through the night maybe only a handful of times. Also, people often told her they loved the lipstick she had on, but she never wore any. The one that tugs at our hearts to this day was Haylee herself often saying, “I can’t breathe. I need water!”

We wish we wouldn’t have explained all of these signs away, because the truth of what was wrong was far more scary than we could have ever imagined.

At her three-year-old check-up in October 2015, the look on her pediatrician’s face was one of unsure worry. He had, for the first time, heard the heart murmur countless other physicians Haylee had seen over the years had heard. After some discussion, we decided to wait a month, and if it was still present, she would get an echocardiogram.

In the meantime, one day Haylee was visiting her grandfather who was paralyzed earlier in the year. The staff at the facility noticed her purple lips, nails, and shortness of breath. They begged us to contact her pediatrician. We did, and that week she had her first echocardiogram.

We knew something must have been horribly wrong when the technician left and came back to say the doctor would see Haylee that day. What we couldn’t figure out is why we had to go for a chest X-ray beforehand. What could possibly be wrong with our baby? The doctor said Haylee had a complete atrioventricular canal defect. Often caught after birth, hers had gone undetected, which had caused the much more serious condition of PH. He said words like “incurable,” “inoperable,” and “transplant,” and our hearts sank. She would have to seek treatment at St. Louis Children’s Hospital, because this condition was so rare.

That same week, after learning she had an oxygen saturation of 75 (normal is 100), she got her first heart catheter. Her prognosis was not good. Her PH was severe, and we were told she probably would not make it to adulthood and might only have about a decade to live.

We had only one choice—to fight and do whatever we could to try and save Haylee’s life. The first step was to start an aggressive medication plan that included having a Brovaic catheter placed in her chest for 24/7 IV medications to be delivered through a pump she calls “Charlie Brown.” This medication would not cure the disease, or not even necessarily improve it, but, at best, would keep it stable and slow down the progression. In Haylee’s case, this has been what has happened thus far. We have only to hope for stability. The next step is advocacy and raising funds for a cure for PH, which has become PHunWalk4Hay .

It’s important to note that in the heart of this storm is a beautiful, full-of-life little girl, who shows us more strength, courage, adaptability, and inspiration than most people do in a lifetime. Never once has she complained. Instead she adapts to and conquers every situation. Haylee is not just living life, she’s loving living it. She’s an inspiration to the PH community, which as been a constant support for us through it all. Haylee even says she’s famous in the PH word, which is sort of true. We receive constant messages saying how Haylee has helped them through bad days. She even helps others name their medication pumps.

At two weeks old, I remember looking down at Haylee in my arms and feeling she had a big purpose in life. Today, her purpose is clear, and she’s fulfilling it every day.