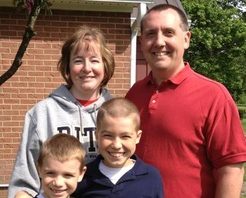 Our younger son had just turned 3 and our older had just completed kindergarten. I was in the prime of my life… looking forward to playing with my boys, watching them grow and actively participating in this process. I enjoyed going to work part-time as a pharmacist. I wasn’t a fitness guru, but walked a lot for exercise and had taken a belly dancing class for fun the previous summer. I hadn’t been exercising as much within the last few years, and figured that was why I was short of breath and gaining weight. Never did I think that I was truly sick.

The physician’s assistant that gave me the news after my heart catheterization, acted like it was no big deal; I wasn’t to lift anything over 15 or 20 pounds and I was going to have to be on an IV medication 24/7 for an indefinite period of time. To me, this sounded undoable. I wanted to run and play and swim with my boys. We had two six month old black lab mix puppies at home that I was looking forward to training. And my younger son was in the midst of being potty-trained. This felt like a death sentence when combined with the information I had looked up online while waiting to have my diagnosis confirmed by heart catheterization.

The doctor stated it was ominous that I had passed out after climbing our stairs at home. He said I was very sick, but very fortunate all at the same time. Had I been diagnosed 15 years earlier, I wouldn’t have any treatment options available. Now there were a handful of treatments and more on the way. I was going to fight this with all I had in me, which at the time felt like very little. I was going to raise my boys with my husband.

The hopes I have for this year’s PHenomenal Hope 5k (PH5K) are innumerable. A lot are personal, I want the money raised to help find a cure. I want to do all the things I’ve dreamed of doing, to be done without a scooter or some other modification. I want to be my old self, and I want my PHriends to be better too. But almost as many are for the PH community at large.

I want all doctors to be trained to consider PH a possibility when someone comes in with shortness of breath, and not have it be considered only when nothing else is being found. A simple echocardiogram and X-ray may point them in the right direction and allow a patient to start treatment before their disease has progressed. I was lucky that my diagnosis process only lasted a few months; yes, it was a bad sign that I passed out that day, but the right tests may not have been done had something so serious not have happened in the early stages. I want new patients to know that they are not alone.

I went to support group meetings, but rarely did I stumble upon someone in my age group even though PH is a disease found mostly in women of childbearing age.

There needs to be a better way to get these patients connected with others like them. This comraderie is an amazing help in and of itself.

I hope PH5K becomes an annual event that gets the word out to the world about PH and helps anyone thinking that something just “isn’t right” with their health to pursue it, before they are so sick that its harder to fight. This walk will bring HOPE to our small but important community.

I want to do all the things I've dreamed of doing