I am a Warrior: Margaret Phelps 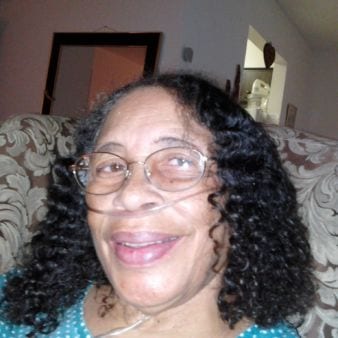 I am a warrior, and you are losing, PH.

In 2007, I began to feel the effects of what pulmonary hypertension can do to you. I had been an asthmatic all my life, and suddenly at the age of 66, no treatments were working for me, I was in and out of the hospital more than I had been most of my life.

The doctors did not have a clue; my oxygen levels were down, and my legs and feet began to swell. I had a part time job working at the local high school, and after Christmas break I was not in any condition to return. I went to see my primary doctor, who was out for vacation, so another doctor saw me and she did not have a clue what was wrong either. She gave me Prednisone and antibiotics, but I seemed to get worse I could not breath. Asthma medications and treatments were not doing anything either.

When primary doctor returned, I went to see her and she right away knew something was wrong and it was not asthma. She referred me to a pulmonary specialist, who got me in the same day. She took a few tests and called me in with my husband and son. I will never forget that day; it was the day I was diagnosed with PAH.

The specialist needed to do more tests, so I had to go back several times to get them done. I felt as though I was walking around like a zombie for quite a while. Then I was put on two medications, and my specialist said I would need to take them for the rest of my life. I did not know what to do. The medications were quite expensive, both in the thousands for a 30 day supply. I told her I could not pay for this medicine, but she told me not to worry and that it would be taken care of.

I know I called my nurse every day. I was ashamed for being such a cry baby, as old as I was. I was in a lot of pain, I could not sleep, and I was confused. But my doctors are very good. I have learned that you have to let them know how you feel, and exactly what is going on. It is your body; they do not know if you do not tell them. I love my medical team, my primary doctor, my pulmonary specialist, and my rheumatologist.

I have seen better days, and I have seen worse days. I have aches and pains, but I am thankful I am alive. I move slower than I would like, but I get there. I used to get upset when someone would tell me, “Well you don’t look sick,” after I have told them what I’m going through. But I am used to it and I now take it as a compliment. I do not want to look sick!

We have to take the bitter with the sweet and be thankful that we have good doctors. We have the medication and everything we need to help us. I will be a survivor of 11 years in February 2019. I consider myself a warrior and I am phighting PH daily.

One thought on “I am a Warrior: Margaret Phelps”