I Cut Negativity Out: Elisa Lipnick 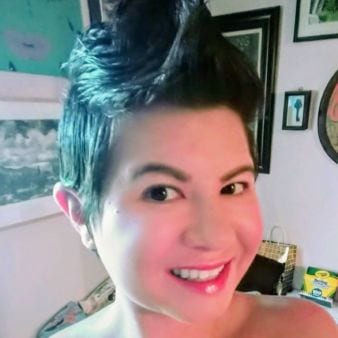 Seven years ago I noticed I was becoming short of breath at work. I was an assistant manager in a retail store, so I did a lot of walking each day. I started to notice that I was extremely short of breath just walking around the store. I thought I was just out of shape, so I decided to go to the gym. The first thing I did was the StairMaster, after about three minutes of walking up the stairs I was severely out of breath, and could feel my heart pounding very hard. I reached out to my rheumatologist, I also have lupus SLE, he sent out for a bunch of tests to be done chest x-rays, CT scans and lots of blood work. After several months of tests, I was sent to my first pulmonologist.

I saw my first pulmonologist in January, but I needed another opinion. It took me several months to meet with a second pulmonologist. At that time I had only gotten worse. I was having trouble getting dressed, getting out of bed and, of course, just breathing.

I was finally scheduled to have a right heart catheterization, this procedure would measure the pressure in my pulmonary artery to determine if I had pulmonary hypertension. I did; my pressures were 89. The pulmonologist who ordered this test told me that my case was so severe that he was going to send me to a PH specialist.

In July 2012 I finally met the pulmonologist that I still have today. He told me straight up that I did have PH, and at the time I only had two to three years to live, because my pulmonary hypertension had progressed very fast. He told me I had two options, I could fight and start aggressive medications to combat the progression of PH, or the other option was to do nothing, which would lead to death. I chose to fight!

After that day I was determined to beat this two to three year timeline I had been given. All I could do at the time was to think positively. I told myself that I no longer had room for any type of stress or negativity in my life, and my main goal became to save my own life. I started several medications that had very extreme side effects. Not only could I not breathe, but I was in pain from the massive side effects from the medication.

It took me a couple of years to finally have enough strength and breath to get active again. I slowly begin to work out at the gym and at home. I was starting to be able to see my friends too, and have what became my new normal life.

On social media I was able to connect with other PH patients. I met such an amazing group of brave fighters just like me. We understood each other, and it was the best thing for me to connect with these people because I finally felt like I wasn’t alone.

After a couple of years of feeling fine, in 2017 I got really sick. I was in the hospital. The first week they did test after test to find out what was making me so sick. Doctor after doctor came in with no information as to what was wrong with me. They finally found that I had a virus, but because I have such a low immune system this virus almost killed me. One of the tests they did was a spinal tap, this caused me to have very severe headaches, but I was able to go home after a two week stay.

This hospital stay set into motion three and a half months of pain, uncertainty, and trauma to my body. Due to a brain bleed, I don’t have much memory from December 1, 2017 to January 11, 2018. By February, I had been told I had one and a half years left to live. I was in heart failure, and needed a double lung transplant. I was scared and heartbroken.

Action needed to be taken. I immediately began an extensive journey of self-discovery. My purpose was to heal, so I would be able to spend what could be my last year with family and friends.

I intensified my positive vibes, I cut negativity out and I’m studying to be a healer/shaman. Soon, appointment after appointment with my various specialists, my results were getting better. I was getting better!

Now, I’m building an online business, and talk of a lung transplant is off the table for now. It’s amazing what a year can do to a person.

One thought on “I Cut Negativity Out: Elisa Lipnick”