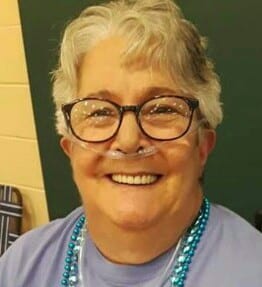 My journey with pulmonary hypertension (PH) started back in September of 2010. I was laying in my bed with a lot of pain, and I was having a hard time breathing. I called my primary care provider and she said to come in. As soon as I got there I was told to go straight to the hospital. I was given a chest x-ray and then a CAT scan with contrast. Then, I was admitted to the hospital; I was there for quite some time.

I was seen by a pulmonologist. He put me on two inhalers, and could not get my oxygen past 86. I was released on oxygen with two liters of oxygen. He made a phone call to Dr. Rumbak. I was able to get an appointment within a month. He proceeded to perform a right heart catheterization. I was given the great news. I have PH, along with chronic obstructive pulmonary disease (COPD).

I was put on letairis for at least a year. Adcirca was then added after another right heart catheterization. A year later I was taken off leteris and put on tyvaso. This worked fine for a while until I started getting pains in my chest. I was then put on opsumit.

I can’t say that I’m depressed, but this disease has taken a toll on my life. Before all this started I was working two jobs. One of them was working with kids in a before school program, and the other was waitressing. I had just bought a new 2010 F150, which I had to sell. I could not take care of the truck because of my PH. I traded it in for a Ford Escape. It was a lot easier to maintain.

When I first went to see Dr. Rumbak, he handed me a paper for a support group in Tampa, Florida where I live. I kept telling myself, “I don’t need this,” but in the back of my mind I knew that I did. I sat in the house all the time and never went out except to go to the store for food.

In September of 2013 we all went to Italy for a family vacation. There were ten of us all together. My family went to the beach one day, but I could not go because it was a far walk. I wanted to see what the supermarket was like another day, but I was shut down for that also. The whole trip I felt as though I was treated as a child, and couldn’t do many things. I felt worthless. So when I got home I decided it was time for me to join the support group.

My first time attending the support group was scary. I met a lot of people with the same disease as me. In time, I became good friends with all the people in the group. I couldn’t believe all the fun I was missing. We go out to eat a lot, play games, go to trivia, and conferences. I felt like a person again. They make me feel like I am part of one big happy family. If i was to need something, they were right there for me. I am so grateful to have them all in my life.

I thank you for taking the time to read my story. Also for Team PHenomenal Hope’s assistance through the Unmet Needs Patient Impact Fund. Since being diagnosed and having to survive on limited funds, it’s definitely been a financial struggle.

Irene is a recipient of the Team PHenomenal Hope Unmet Needs Patient Impact Fund. Learn more about how this fund supports PH patients at teamph.org/unmetneeds.