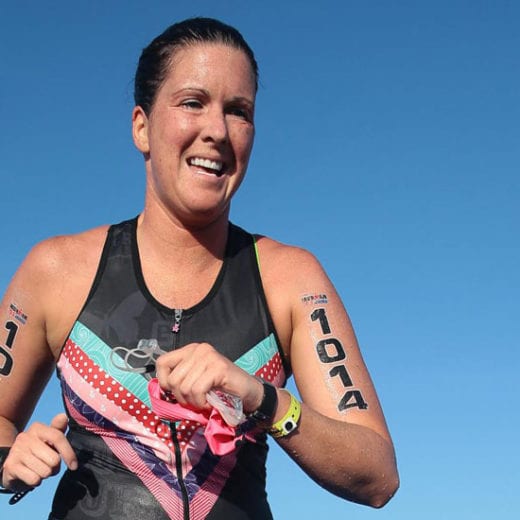 I consider myself a collector of life experiences. I would rather experience and feel moments that are rare and raw than collect physical things. Beyond every expectation I could have set, my trip to the Philippines was just one more gem to add to my collection.

To fill you in, last December I was given the gift of an entry into Ironman Subic Bay by my then fiancé on our upcoming honeymoon. I was elated with excitement about the thought of racing in Asia but was also very nervous about the opportunity. One thing was for sure though; I would swim, bike, and run anywhere I could because it’s my favorite way to explore and merge myself into a new place. I also was ecstatic to be able to represent Team Phenomenal Hope in Asia as my first race on the team.

While Pulmonary Hypertension is a treatable disease, it’s also an incurable disease that requires fighting each and every day. Some of that fighting is for the things the rest of us take for granted, like the ability to easily breath without shortness of breath or the ability to walk up the stairs without feeling light headed or dizzy. As you’ll learn through this race report, breathing and fighting were both on my mind a lot at Subic Bay.

A 70.3 Ironman is a 1.2 mile swim, 56 mile bike ride, and a 13.1 mile run. It’s honestly one of my favorite distance races because it’s short enough that it doesn’t take all day, but its long enough to challenge everything you have to finish and improve. One thing is for certain, this race was a challenge because of the heat and unfamiliar terrain. It was also one of the most beautiful places I’ve had the privilege of racing.

The 1.2 mile swim was located at Dunagree Beach in Subic Bay. It’s an absolutely stunning location because you can see a mountain range in the backdrop. I arrived in transition at about 4:45 a.m. so that I could drop off my water bottles and make final adjustments to my bike for the race. I then headed to transition as the sun started to rise. At 6:40 a.m. my cap group was the last to start. As the final gun goes off I always get teary eyed because I just can’t believe that I am starting another 70.3 mile adventure. It’s a really emotional moment for me regardless of how many times I’ve done it.

As the gun goes off I ran as fast as I could to be one of the first people into the water. I then started kicking as fast as I could to separate myself from some of the others to avoid the congestion of flailing arms and kicking legs. The first few hundred meters was hard and I found myself struggling to breath and swallowing a lot of water as I pushed through to separate myself. It felt like I was moving fast but I still ended up in the mix fighting for space as we all started our swim. The swim was stunning. You could see everything in the crystal clear water and I found myself loving the view as we made our way through the rectangular swim. The swim felt fast and as quickly as it started it seemed to be over. Out of the water in 39:30 and headed to transition.

The 56 mile bike course was a great challenge for me as the sun came up and started to get hot. The bike course goes out and back on the Subic-Tarlac Express Way and was also beautiful with stunning views of the mountains. I was excited because as we left transition we got to ride down the runway of the old airport which was really cool because who can say they’ve gotten to ride down a runway, right? As we exited the runway we headed up a steep climb a few miles long and I knew that my indoor training was going to prove to be a struggle in the great outdoors. I worked really hard on that first climb struggling to make it to the top, and when I did I felt so accomplished to be on the other side.

At about mile 17 on the bike I had a moment that really made me feel close to the PH Community. As we topped a small climb I noticed a black cloud in the distance. As I got closer I realized it was smoke and I discovered that someone was burning a field alongside the highway. As I started to go through the smoke I could feel my chest getting tight and my airway constricting. It felt like I was fighting for every bit of air I was taking in. I started to feel dizzy and short of breath. In that moment I really thought of those with Pulmonary Hypertension and those that I was representing by being on Team PH. It really helped me to push through and make it past the smoke.

As I reached the turnaround I was relieved to be headed back. It was getting really hot and the heat was starting to affect me. I underestimated what a difference the heat would make compared to my indoor training all winter back in Pittsburgh. I reached the transition for a final bike time of 3:28:52 and I was onto the run.

The 13.1 mile run was relatively flat and very hot. There was no shade on the course so my original plan was to try to get out of the sun as fast as I could. I quickly found that my body was not thinking the same thing and I found my fastest run being at about a 11 min/ mile pace. The water stops were every mile so my goal was to get though one mile at a time. At each water station I took about 60-120 seconds to swap sponges, get more water and shove ice into my jersey. The temperature was in the 90’s and again I had underestimated the difference between training on the treadmill and being out in the heat. All I thought about was keeping one foot in front of the other and moving forward. I came in at 3:04:24 for my run.

Ironman 70.3 Subic Bay was not one of my best performances, but one that I am most proud of. I am proud to have challenged myself to race in another country and to embrace all the differences in terrain and temperature. I am also proud that I could represent Team Phenomenal Hope and the message that anything is possible regardless of the situation.

Going into Subic Bay, I knew it would be a challenge since I had only trained indoors all winter. But I also knew that it was an opportunity of a lifetime. I was one of less than 75 women who finished the race. Triathlon is a growing sport in Asia and I am especially proud to represent women in triathlon there as it grows.

The Philippine culture is so welcoming and filled with so much love which made our stay in the Pinas magical. The kindred spirit of everyone we met was indescribable and I am so grateful to have had experienced it. I hope to inspire Team PHenomenal Hope and the PH community with each and every race we as a team complete this year. I hope our stories of struggle and triumph light a fire in all that read about our journey! More to come!