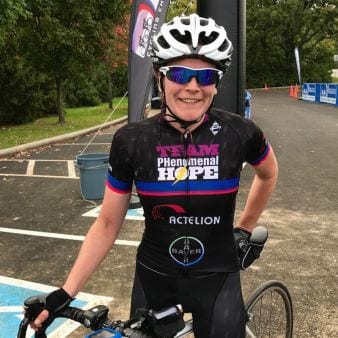 A few years back I was at a clinical trials dinner and one of the pharmaceutical reps mentioned how I should join Team PHenomenal Hope. I began to work more with pulmonary hypertension patients and again heard about this Team PHenomenal Hope. A little more time passed and our group at Brigham & Women’s Hospital put together a team for the Boston O2 breathe walk. We had a blast and this reminded me again of Team PHenomenal Hope. I finally looked them up to see what this charity team was all about.

I was incredibly impressed and knew I had to be a part of this! After browsing around the website I took notice to this Ohio RAAM Challenge that one of the team members had done before. This was perfect. 200 miles (at the time I had only done 112 miles years back) and in the town I grew up in, Dublin, Ohio.

Training was certainly the fun part for me. I was doing local bike races with my club team Sunapee Racing and adding in 100 mile rides here and there. A few weekends before the big race Kyle (the fiancé) and I did 2 100 mile days and I basically just tried not to get dropped. I felt ready and rested going into the big day!

I had Kyle (also a cycling enthusiast and coach with Finish Fast Cycling), drive the 12ish hours with me to Columbus, Ohio. Sometimes it’s easy to forget how important it is to have a good support system through any sort of racing, so I was happy to have the company. Originally, I was doing the race supported (with Kyle driving close by), but they changed the rules a few weeks before. Well, here goes nothing.

We woke up pretty early (4:30 a.m.) to head over for the 6 a.m. start time. The weather was looking to be fantastic (one less thing I had to worry about, phew). I was the only lady racer at the start line, but don’t worry, the boys didn’t intimidate me. The rules also changed where you could draft. The only time this was useful was until the first aid station, then pretty much it was all solo.

So, for the first few hours I just sat behind this really tall guy and panicked because I had only used my navigation function on my Garmin a few times. It wasn’t giving me directions. WHAT IS WRONG? Finally, after playing around with it while sitting behind tall guys I had it figured out (I restarted the route and finally used the zoom function… doh). The first aid station came quickly and I REALLY needed to use the restroom, to put it frankly. I drank both giant bottles and already ate half my food. Just as planned. One guy went straight through the aid station, but I kept to my plan.

After the first aid station I was with one guy for a little bit who told me I had a long ways to go (multiple people kept telling me we had a long ways to go. I was like, I know?). I love hills, so I might have got excited and left him behind around 55-60 miles. The straight up and down hills began and they were relentless. I never knew Ohio had so many hills! The weather warmed up pretty quickly, so I kept to my hydration and nutrition plan. Basically drink a lot and eat a lot.

At the halfway point, Kyle was kind enough to meet me there (this was the only thing he was allowed to do with the new rules) with a smile and some cheez-its (and of course more hydration too). I love cheez-its. The somewhat short chat was good motivation to head back out, plus only one guy was in front of me! I struggled a little with eating because I was feeling so full, so I switched to more GU type food to give my stomach a change.

One thing I noticed during the race was the incredible amount of road kill. It smelled bad, so I tried going faster so I didn’t have to smell it as long. Anyways, the last aid station was around 150 miles or so. I took in an endurolyte to fight any sort of dehydration and refilled my bottles. My shoes needed to be loosened, but my legs felt great to my surprise. The aid station crew was very encouraging! At around 165 miles my Garmin flashed LOW BATTERIES. I started to panic. I was so worried about training, nutrition, hydration, etc. that I didn’t even think that I would run out of battery.

I started to pick up the pace because I didn’t want too be far out without Garmin navigation (I had a cue sheet but, still). The last bit of the course was a lot less hills, but seemed to go by SO SLOW. Then, at 190 miles my Garmin said bye bye. I instantly took a wrong turn, had to get my cue sheet out, and then missed another turn. I ended up going off course a little but used my phone to help me get back.

DONE! I felt ready to be done, but my legs didn’t feel terrible! My parents and Kyle were there at the finish, which was nice. The crew told me I broke the record by 11 minutes (11 hours 55 min)! I was excited and made the race that much more special because it was all for Team PHenomenal Hope. I raced in honor of a patient that we have at BWH and couldn’t wait to tell her about the race. 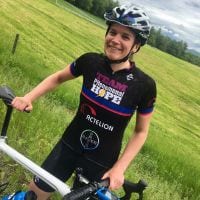