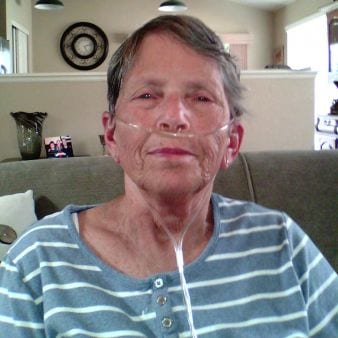 To use the term “Hit the wall” would be the best way I could describe the situation that changed my life. I will not say forever as I remain positive that someday a cure will be found or a medication that will take away the illness.

I was a very active person, and would wake up refreshed and ready to go. You could say I did things from sunup to sundown. As for activity it was cleaning my house, cooking, working in my garden, meeting with friends, traveling and whatever came up, I was ready to take it on. Then one day while climbing our stairs to change clothes, I became so out of breath, and had to sit on the top of the staircase and regain my strength and breath. I told my husband, and we both wrote it off to having a big day.

I always ran circles around my husband, and it was a joke between us. One day while working, I began to have severe pressure in my chest, and very short of breath. It was to the point that I decided to go in and see my Primary Care Physician who was a family friend. With my symptoms, and her doing her residency in Pulmonary Hypertension, she told me that I should go to the hospital immediately.

She wanted to call 911, and I refused as I knew my husband would be on his way home from work. Ironically he was just passing the doctor’s office when I called. I asked him to pick me up at the office. Knowing me for many years, he did not ask questions. He drove me to the hospital I wanted to go to. When we arrived, he asked what was going on so he could have something to work with when we got to the emergency room. I told him I thought I was having a heart attack.

I was given a thorough exam and the doctor said that he did not think I was having a heart attack. He wanted to admit me for further testing. I got a room, and a doctor came to see me and explained to me what he was going to do the next morning. The next morning I was given an angiogram. The doctor explained everything as we went along. As time went on, he told me he was going to introduce a medication that might cause some reactions to it, but it was to see just exactly I would react. He was right as I immediately became flushed, but it did take some of the pain away.

After the angiogram they took me to my room and the doctor came to see me. He talked to my husband, and then to me that he had a concern that I may have a disease called Pulmonary Arterial Hypertension. Neither one of us knew what this was. He wanted to send me to the University of Colorado to see some specialists in this disease. He called and they said it would take at least three months before they could see me. He would not accept this and called the specialists directly.

I was to be seen immediately and my husband and I began our journey in understanding and dealing with this disease. The doctors felt in order to continue a semi-normal lifestyle, which I would have to be given a drug called “Flolan”. I was told that I would have to have a catheter put into my chest. During this time, my husband and I were told that my life expectancy on this medication was about 2 years max. Needless to say, anyone that would be told this would have a certain amount of anxiety and panic.

Not knowing what my future would be, I made my own self-dedication and determination that I was going to beat these odds as I still had way too much to do in life. See my Grandson’s grow up and have their own children. Later, I was privileged to have a granddaughter born. Way too many things had to be seen and done before this lady was going to leave existence. After several years, my doctor felt that I could be taken off of Flolan and placed on an oral medication along with other types of medication in combination.

I was one out of five people that he had done this for and thankfully, fifteen years later, I have succeeded in beating the odds and I will continue to do so as long as I can. I refuse to sit on the pity potty, and try to remain as positive and focused as I can be. My husband and I are now the Support Group Leaders for the Denver area, and work to help others deal with this disease.