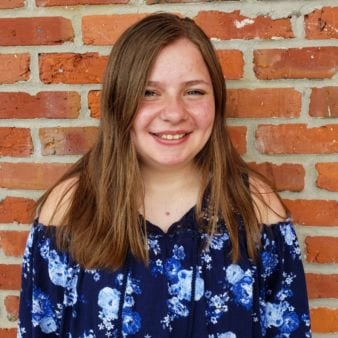 Kayleigh is 13 going on 21. She’s in the eighth grade and plays clarinet in her school band (strengthening her lungs). She’s sassy and spunky and full of life!

Kayleigh was very suddenly diagnosed with PH when she was eight years old. At birth we were told she had mitral valve prolapse (the valves between her heart chambers didn’t close completely) and was followed by a local pediatric cardiologist. When she was six years old he told us her heart had corrected itself and she was heart healthy.

Shortly after, Kayleigh began showing what we now know were PH symptoms. She was unable to keep up with her peers. She couldn’t walk home from school with my son (now 17) and niece (only five weeks older than Kayleigh), many times my son would end up carrying her the two blocks home. She couldn’t ride her bike or walk up a flight of stairs without being out of breath.
Then in Sept 2013, when she was seven years old, she was running at school during PE and passed out. That was the first of many episodes. Each episode was followed by a doctor appointment, different diagnosis, many medications and treatments along with tests and monitoring.

Finally on Friday, July 11, 2014 we got the opportunity to see another pediatric cardiologist. She knew immediately during the ECHO what was wrong with Kayleigh. This doctor had just diagnosed another child with PH a few months prior. Kayleigh was in severe right heart failure and her pressures were estimated to be in the low to mid 90s (normal is below 25). This doctor’s bedside manner was lacking because I remember her telling me, “Your daughter IS going to die from this. It probably won’t be soon but it will happen. Pulmonary hypertension is a rare disease with no cure. Treatments will only slow down progression, and none of these treatments are approved for children. These treatments range from oral medications to a heart and lung transplant.” Yep, I was devastated. Worse was trying to explain everything to my husband without scaring Kayleigh.

We left that appointment by ambulance and were flown by helicopter to Children’s Hospital of New Orleans. That Sunday afternoon the head of cardiology came to Kayleigh’s room and said they had done all they could do for her, they just didn’t have the knowledge to care for how sick she was. He suggested a few places we could go, including Texas Children’s.

Kayleigh was admitted into Texas Children’s the following Tuesday. She underwent tests, procedures and began seeing which medications were best for her. After 23 days in the Pediatric Intensive Care Unit she was discharged with a subq pump and oral medication.

The team at Texas Children’s has been a dream come true for us. Kayleigh has responded very well to treatments and is doing WONDERFUL! She is no longer in heart failure, her pressure is down to 36, and she can run and play with her peers without being left in the dust.

Of course she has setbacks and times when she needs to rest, but that’s part of our new normal.