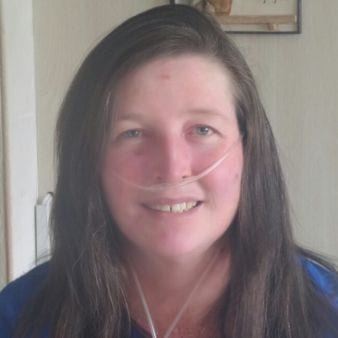 Hi, my name is Kim Foulston, and I am 44 years old. I have not been a stranger over the years to pain, regular doctor and specialist visits, heaps of medication, blood tests, hospitalization, drips, biopsies, swollen ankles from water retention, absenteeism from school and later the workplace, and disappointment when unable, at the last minute, to attend functions. I am accustomed to extreme fatigue, no energy, and always getting infections. You see, in 1989 when I was only 15, I was diagnosed with the autoimmune disease, Systemic Lupus Erythematosus (SLE). Instead of the immune system fighting infection, it turns on itself, and, in my case, attacks my skin, joints, tissue, and kidneys. Treatments like Cortisone suppress the immune system, and but when my immune system was suppressed, I was prone to infection. What a vicious circle!

In the years that followed, I learned to accept what came my way. I overcame swallowing handfuls of pills without gagging and also my fear of needles. I watched my friends as they married and had babies. It was a bitter pill for me to swallow knowing, but finally accepting, that I would never have children of my own. I was fortunate enough to have a very caring and understanding family who stood by me supporting me financially and emotionally.

I would often tell my rheumatologist that it felt like I needed oxygen. I would become breathless whenever I walked up a slope. He told me it was probably due to the fact that I was unfit and suggested that I get more exercise. At this time, I was seeing a pulmonologist as well. I would struggle through my lung function tests. She was treated me for asthma.

After many, many months of continually struggling with shortness of breath, early in 2011, I went to my general practitioner who examined me thoroughly and called my mom to say that I needed to see a cardiologist without delay. He set up an appointment for me at the Union Hospital, not too far from my home. Since it was a long weekend and he was going away, the cardiologist admitted me into the Coronary Care Unit under the care of a specialist.

It was then that I was diagnosed with Pulmonary Arterial Hypertension (PAH), which is secondary to my SLE.

After the weekend, I was referred back to my pulmonologist who was at a hospital some distance away. I was admitted and seen by a cardiologist at that hospital.
Numerous tests were done, confirming the diagnosis. I was put onto Revatio 20 mg three times a day. I also was sent for a sleep study and found to have sleep apnea. I began using a Continuous Positive Airway Pressure machine.

I felt the benefit of the Revatio almost immediately although obtaining it from the medical aid has never been an easy feat! On one of my visits to my rheumatologist, he asked me how long I would be on the Revatio, which told me he wasn’t all that familiar with PAH. At that point, I requested a second opinion with another cardiologist and he referred me to a very handsome one who could have made any lady’s heart skip a beat! Once more, a diagnosis of PAH was confirmed, and he steered me in the direction of Milpark Hospital and recommended Dr. P.G. Williams and Professor M.R. Essop, both of whom had a keen interest in PAH.

It’s been over seven years now since diagnosis and almost six years under their care. About two years ago, his patients were put onto dual therapy when medical aid finally agreed to sponsor Bosentas (the generic form of Tracleer). It was brought into the country from India and is categorized as a Section 21 drug.

Every six months we had to get authorization to continue its use and pay a fee to the Medical Control Council. I cannot thank my father enough for having me as a dependent on his medical aid and for the hours and hours he has had to spend on the phone sorting out all the issues and to my mom for walking the long road with me and being my best friend.

Dr. Williams increased my Revatio to 40 mg three times daily, and Professor Essop has performed two angiograms, which revealed that the disease is irreversible. The last one showed the pressure in my lungs to be 90.

The PH patients are all being changed over to Cialus (in place of Revatio) and Volibris (in place of Bosentas, as Volibris has now been registered in South Africa.) Some patients are being treated with Iloprost, which has to be administered through a port. I have made and sadly lost many good friends with PAH. Some have undergone double lung transplants; others have passed away suddenly. It makes you think how fragile our lives are, and how we need to live each moment to the fullest. I have decided that I do not want to go the route of Iloprost or a transplant, but want to live out my days with as much quality of life as possible.

It saddens me that I can no longer fly overseas, but I am thankful for the trips I made prior to diagnosis. I now travel from the comfort of my couch, on my oxygen, visiting places all over the world through the television screen. I sleep between 12 to 14 hours each night and wake up around lunch time the following day. I rest when tired and try not to exert too much energy. Even climbing the stairs in my house is a challenge.

I constantly remind myself that there are others worse off than myself. I don’t like to part on bad terms with family or friends, as life is uncertain. I am friendly and like to bring sunshine, smiles, and laughter into people’s lives when I initiate conversations in the shopping center with customers, shop assistants, or even the cleaning lady.

I am so thankful for the support I receive, for the dedication of my doctors, for the new drugs that are slowly, but surely, being used in South Africa, and mostly for my God who loves me and has carried me through all the tough times.

One thought on “Uncovering My PAH: Kim Foulston”