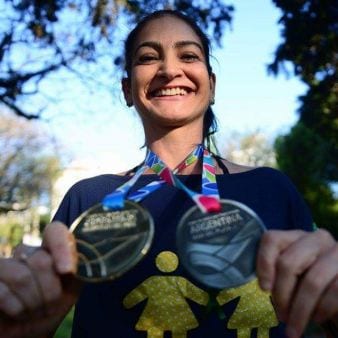 My name is Liége Gautério, and I am a 44 year old Brazilian. I work in physical education, but I studied biology and speech therapy as well.

I always practiced physical activity. I did ballet, gymnastics, bodybuilding, swimming, street dance; the list goes on. My interest in physical activities started at the age of five, when I started ballet. Since then, I’ve hardly stopped.

My story began in 2003 when I had a spontaneous pneumothorax. I underwent surgery, and from there, the investigations began. My diagnosis was pulmonary fibrosis due to hypersensitivity, a progressive if untreated disease, along with pulmonary hypertension. I lived without significant symptoms of the disease until 2009, when it became difficult to catch my breath after running or climbing stairs.

It evolved until the end of 2010 when brushing my teeth became a grueling task. In January 2011 I began pulmonary rehabilitation at the Santa Casa in Porto Alegre and started using oxygen. In April of that same year I was put on the transplant list. A few months later in July, I graduated with a degree in physical education; at that time I was using a portable concentrator. Five months after being placed on the list, I received the transplant.

My post-surgery was super quiet. I spent two days in the ICU and 18 days after the surgery I was already at home. I returned to work three months later and to dance classes four months later. My return to practice was very slow as I had to start from scratch. I respected the rhythm of my body quite a lot, and being trained in physical education, I set up a very strict training plan for my conditioning. As I responded to the training, I intensified it a little more. Today I train normally and perform everything I did before the manifestation of this disease.

Everyday I work on body building training. Once a week I work on functional training and ballet. I have an academy called L7 LIEGE TRAINING COURSE where I teach pilates, functional, and personal training.

I became aware of the World Transplant Games and immediately was very interested. In high school I always participated in the school olympics in the 100 meter and 200 meter races, and I did well. I got in touch with my old track coach, and he ran into me training. I took a look at the last few times of the participants in the previous World Transplant Games, and thought it was not impossible to reach. Of course that is not the most important thing. What matters most is the participation and dissemination of our cause.

I was the first Brazilian woman to participate in the games. In 2015 I won two medals; one gold and one silver. This year in Spain I won three medals for my country. I am currently living with a single lung in operation, but it is this lung that breathes new life into me! 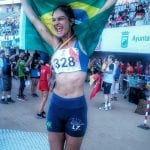 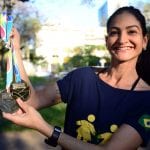