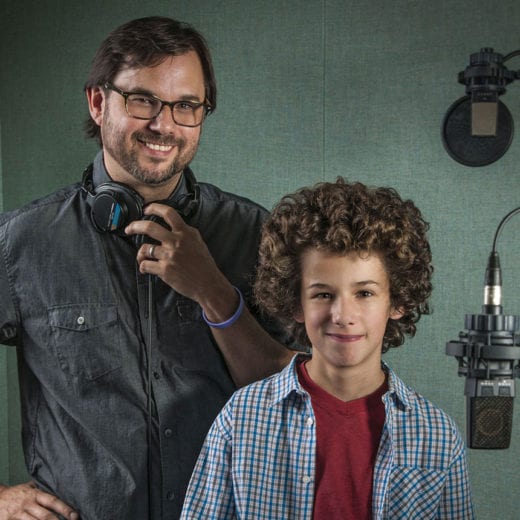 My name is Lucas Van Wormer. I am 13 years old and I am in 7th grade. I am an only child and I like it that way because I don’t have to share with brothers or sisters. My friend Aaron, at school, said that I have the best life because: I get straight A’s, I have a cell phone, an afro and I don’t have to do P.E.! I don’t go to P.E. at school because I have Primary Pulmonary Hypertension.

When I first heard that I had PH, I was 4 years old. I was worried and nervous. I did not know what PH was or what it meant. When I was really young, I went to the doctor a lot. My pediatrician thought I had asthma. My mom would always notice I had blue lips. I would get colds a lot and had to use an inhaler to breathe. But that didn’t work, because it was NOT asthma.

One November morning, 8 1/2 years ago, I was feeling a little sicker than usual. My dad took me back to the pediatrician. The doctor wanted to make sure I didn’t have fluid in my lungs, so she suggested I get a chest x-ray. Well, my lungs were clear and I didn’t have the flu. But getting that x-ray was a stroke of luck – because that x-ray took a picture of my heart – which the pediatrician said looked enlarged. She said we had to go to a kid’s cardiologist right away.

A few nights later, I remember waking up at two in the morning with pain smack in the middle of my chest. It was a pain I had never felt before. I went to my parent’s bedroom to wake them up and said, “My heart hurts.” It was hard to breathe and I was dizzy. We got dressed very quickly and went to a hospital that’s only a few minutes from our house. I was in a hospital bed getting many shots and medicines, all the things happening at once. I still didn’t know what PH was. Then, the doctors said I needed to go to another hospital because they didn’t know how to treat PH in kids – and that was my first ambulance ride. I was scared and I wanted my mom to come with me. The ambulance drove really fast and my mom almost threw up. The paramedic had to help her breathe, too.

They took us to a new hospital, UCLA. They knew what to do. We love UCLA! I met Dr. Juan Alejos, who is really nice for a doctor, and he made me very comfortable. He explained all about PH to my parents and me. He told us that it was very serious, but he would give me medicine to make me feel better. To get a proper PH diagnosis, kids or adults have to go a heart cath lab, where the doctors put you to sleep and they use tools to go inside the arteries of your neck, which travel all through your body, into your heart. Then they test different PH medicines directly to your heart to find out what medicines you respond to. Those medicines can be pills, or inhalers or even pumps, which feed the medicine permanently into your chest. Lucky for me, Dr. Alejos said I responded to oral medication. He also said I needed to have an oxygen machine at home and an oxygen tank at school. Back then, I wasn’t used to taking medicine – but now I swallow 3 pills in one gulp!

Looking back, I am so grateful I was sick that one day, because after all those months struggling, getting that x-ray was the key to my PH diagnosis. After I came home, I had to do stuff that didn’t take a lot of energy. Like no running, no playing tag, no bicycle rides. My dad got me an electric scooter, which was awesome… but I crashed it against a wall at the end of the block on the first go! My mom wasn’t too happy with him because I got a bloody lip. When I went back to Preschool, I had to take the oxygen tank. I was embarrassed and I didn’t want the kids to think that I was different. But my friends didn’t care that I had to put on oxygen, they cared about me and they wanted me to feel better. Many times, they would not join the games outside so they could stay with me and not leave me alone.

After I started my PH therapy, my life became normal again. Or more normal, I should say. My PH medicines helped me so much. I felt like a different kid. My body got healthier and stronger over the years. Today, I can do a lot more things than I could years ago.

A couple years ago I started taking art classes. I am pretty good at cartooning. I love drawing with pencil the most. At one recent art show, an artist from Universal Cartoon Studios said she really liked my stuff. I have always loved reading. I used to read Diary of a Wimpy Kid and Captain Underpants – now I recently finished Stephen King’s The Shining and Michael Crichton’s Jurassic Park and Lost World. I also like taking nature hikes… Love going to the beach… I’m a master Lego builder… and I love making stop motion movies with them. And my favorite food is sushi. But, my parent won’t take me out to sushi restaurants too often because my taste is too expensive!

Seven years ago, I went to Texas to attend my first PH Conference. PHA hosts conferences every two years and doctors, patients and their families from all over the world get together to learn more about their disease. That was the first time I met other kids with PH. I learned that other kids had the same problems as me.

I also like to be involved in activities that support kids with PH. Every year, my family and I participate in the Taylor’s Wish 5K in Southern California. I take my scooter and go 5K, no problem.

We really like the Caffrey family, who holds the race in memory of their daughter, Taylor. The Caffrey’s do so much to raise money for pediatric PH research. It’s a fun-filled day for the whole family! One year, I got to be the child ambassador for the race. Because the Taylor’s Wish walk was advertised in the news, I got to be on TV. ABC News came to our house and interviewed me. They interviewed Dr. Alejos and the Caffreys. I was excited to be on the news because seeing myself on TV was AWESOME.

My dad Steve is a voiceover actor and a producer at Fox. Over the past couple years, he taught me how to be a voiceover actor like him. He is really good at his job and he had the idea of creating a number of Public Service Announcements for PHA, so more people could be aware of what PH is and that we need to find a cure. The first spot we created a really cool spot about Pediatric PH research. He and his friends from work created the graphics and music, and I did the voice over. It talks about all the PH kids I’ve met on my PH journey and our hope for the future.

After the spot was released, a lot of people on the web started sharing it – which is great for PH Awareness. But another interesting thing happened… People started calling ME for more and more VO jobs. Since then, I’ve done radio commercials for Target, Sea World, Fruit of the Loom and a number of FOX TV shows. I recorded an episode of Clarence for Cartoon Network and got to work with the guy who plays Sponge Bob, Tom Kinney. I also recorded two episodes of Family Guy, which was really cool! I also worked with fellow PH patient, Sean Wyman, voicing the main character of his pediatric PH cartoon series, Lips Painted Blue.

Last year on May 5th (World PH Day), was the start of a global PH Awareness campaign take really took Pulmonary Hypertension from rare… to EVERYWHERE! That’s when we launched #PHAware! First, I got an Instagram shout out from my buddy Michael Buble, which he shared with nearly 8 million fans! Then something really cool happened… my dad’s coworkers at Fox started playing the PSA’s across the entire Fox Networks Group. Fox sent the spots out to millions and millions of viewers. Then my dad and I got called from Radio Disney. We recorded a whole show about PH and the importance of pediatric research.

Other networks soon followed: CBS, National Geographic, Hulu, Universal Sports just to name a few. New networks are starting to run the spots every week and more places are joining the #PHAware push every day. Places like New York City taxi cabs, which ran our pediatric research spot 700,000 times in two weeks! During awareness month last November, we were invited by NASDAQ to come see our PSA be projected on their tower in Times Square. It was amazing! My dad also created a PHAware App, so people around the globe can connect, share and help raise global PH awareness. On Rare Disease Day a couple weeks ago, our bank became #PHAware and sent my PH story out to nearly 2,000,000 people!

As you can see the past year… the last few months… the past couple weeks have brought so many changes and causes for celebration. But we are not there yet… My greatest wish is to find a cure for ALL the types of PH, so that no one, young or old, will have to go through life breathless. Thanks for reading my PH Journey.