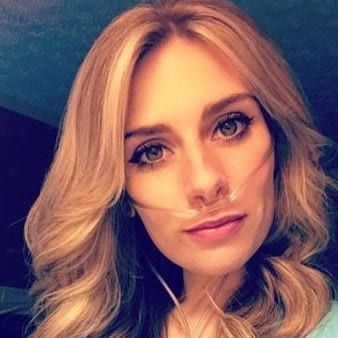 My name is Madison. I am currently 23 and up to about 21 years of age, lived a pretty normal life. Great childhood and typical teenage rebellion phase, exceptionally good upbringing full of incredible memories (shout out to mom and dad). All in all nothing too crazy to note. I did have my first child at 18, graduated high school, eventually married at 19 and then had my baby boy at 20. This is about where the story begins…

During my last trimester, I was short of breath and passing out frequently. But, who would think anything of it especially seeing as I was carrying a 9 lb 3 oz baby! However, once I started trying to get back in shape post baby I began noticing I was unable to do some workouts that normally I would be able to do. I would either start being short of breath (at this time only when I ran) or the exertion would send me into a coughing fit. I mentioned this to my family Naval doctor at the time, my ex husband was a marine, and he told me over and over again I just need to get in better shape. Months continued and my shortness of breath only got worse. Eventually, the doctor sent me to an off base asthma and allergy specialist who confirmed that it was neither. More time passed and I just assumed it must be nothing. After a nasty fall in my bathroom that needed X-rays, I would then find out it was definitely SOMETHING. My scan showed a lot of cloudiness… I don’t have a medical degree, but it didn’t take one to know this wasn’t good. BUT THE DOCTOR WANTED ME TO WAIT 8 MONTHS FOR IT TO “CLEAR UP”. Disagreeing with this STRONGLY, I started trying to find ways to get to an off base pulmonologist.

Finally, found a pulmonologist and he immediately said that it was definitely something and that I needed to have a bronchoscopy ASAP. Which later turned into needing a biopsy. July 30, 2015 I had a thoracotomy on the left side. It came back inconclusive and they shipped it off to Mayo Clinic who also came up empty. The doctor at the time basically said, well if its not anything we thought well then it must be Sarcoidosis and he began treating as so.

Fast forward to November, we were headed to visit home for a month so I made an appointment at the Cleveland Clinic to get checked out by their Sarcoidosis specialists. At this time, I am on oxygen and I can’t go up more than four stairs. I could not work out or do anything that needed much exertion but could still do my day to day things such as, be a mother and a wife, but not without difficulty. Dr. Culver at the Cleveland Clinic told my parents and me, after looking through my entire file and new scans he acquired, I did not have sarcoidosis. He then thought it was a bacterial infection that could be cured. I returned back to California and met with my doctor. For the next few months I continued to get worse, started on chemotherapy drugs, and remained in limbo while my doctor was beside himself that he misdiagnosed.

Another visit home, March 2016, landed myself admitted by squad to the Cleveland Clinic. After many scans they came into my room with the diagnosis that there were clots in my lungs and that I would just need blood thinners the rest of my life and that I was to not travel back home. I was intending to move later that June, so this wasn’t a big deal.

Mid April, 2016 back into the Cleveland Clinic by squad again. During this admission the pulmonary team was presenting me in big meetings to other specialties at the Clinic as well has presenting my case at conferences. No one could figure it out. Then, a new doctor was on the floor for the week (attending docs rotate out at the clinic between hospital time and clinic time). Dr. Joseph Parambil suggested we get a bubble study to see if there was a leak in my heart. In that echo they found something else, the right side of my heart was severely enlarged. When they told my mom and me, it felt like everything came crashing down. Up to this point I was at least able to say my heart was still very healthy. My mom and I sat out in the hallway of my floor by the windows and just cried. I was so fed up with where this was going. I already had a long frustrating and exhausting journey up to this point. Now I had to worry about going into right sided heart failure. But, thanks to this finding, Dr. Parambil was able to diagnose me with Pulmonary Arterial Hypertension (PAH). Shortly after, I was discharged with new oral meds to open up my blood vessels.

At my follow up appointment, June 1, 2016, Dr Parambil expressed that he had been really troubled by my case and continued to dig further as to why I all of a sudden had PAH when there was no other reason for it (he’s an incredible doctor). He finally said that he sent his pathologist to look at my biopsy from 2015 and to not look at the lung like everyone else does but to look at the vessels. Sure enough, he found it. Pulmonary Veno Occlusive Disease. (PVOD-in another post I’ll spend time explaining my diseases) We continued to up medications and add new ones on and I didn’t feel as if I was getting better. Some days, it felt like I was getting worse. Not to mention the intense side effects from the medicines. I wont lie… it was starting to wear me down.

Fast forward once again to August 29, 2016, another doctors appointment but I had a slew of things to get done before it such as, an echo, blood work, different pulmonary function tests and a six minute walk (which I always fail miserably). Sitting in the doctors office, my mom, Mrs. Kristine (basically a second mother— if she’s reading this she should be laughing at that) and myself with Dr. P. After asking if I had ways for caring for my kiddos he said five words I absolutely HATED hearing, “I want to admit you.”

Due to my echocardiogram he wanted to do a right heart catheterization to see how bad my pressures were and if he needed to start me on IV medication called Veletri (I will soon find I absolutely hate this medicine for many reasons). My pressures were pretty bad and I came out of the procedure with a central line out of my neck connected to a contraption called a swan. It should be noted that I cannot be placed under any form of anesthesia due to my poor lung volume and shallow breathing while conscious. The most I can be given is something for anxiety. I was in the MICU for about 10 days and hated every second of it. They started me on veletri and scheduled me to get my Hickman line placed. My line goes in the right side of my upper chest, up over the collar bone, and into my heart.

Not even a month later my line ended up getting infected due to neglect of my home nurse who failed to find an appropriate dressing to cover it. I almost died September 15, 2016. By the time I got to my local ER by squad I was in septic shock and was fading fast. I don’t remember a ton but I remember at one point feeling like I was dying. It was enough of a feeling that I remember only this moment. This feeling was terrible and I pray and hope none of you feel it the way I did. I literally felt my body slowly slipping away from me and for a moment felt as though I was “powering down”. My heart was doing crazy flips in my chest, I was in a great deal of pain despite the pain medication, and I could barely breathe. Each breath didn’t feel like it was enough to keep me alive and it felt like I was suffocating. I looked up at my mom and said, “I feel like this is it, like I’m dying.” I was unaware that I actually had said it out loud.

I was eventually life flighted to Cleveland Clinic. There, the doctors said that if I was a healthy person they’d give me a 50/50 chance of beating this kind of infection. But, my immune system and body were compromised so much already it wasn’t looking good. A doctor met my mom when she got there and told her that in this situation she tells anyone that if you love and care about someone then they should get here. I don’t remember much in the following days but despite what they believed I beat the infection and beat it within a few days! Which is incredible. Every specialist I have seen since has said the same thing.

In October, I had about a week and a half where it seemed as though the treatments were finally working! I was off oxygen and “stating” at 95 which I didn’t normally do even on constant flow oxygen! I had energy again to get dressed in the morning and run errands during the day! Even went grocery shopping! But I couldn’t help but be hesitant and think “a lot of very sick people sometimes have a period of getting better just before they go down hill…” I was right. Many admissions to the hospital soon followed and I was getting sicker.

One night after a fun evening with my babies on the Polar Express, right before Christmas, I was in bed and struggling to breathe. This was a turning point for me because while transplant had always been something in the distance, it wasn’t something that seemed to be an option any time soon and I was very ok with that. That night was the first night my thinking shifted to, “I am so done and so exhausted. I am tired of fighting and every day being a struggle. There is no quality of life for me, I just want to cut these crappy lungs out. Then, I would be able to breathe again.” First time I ever felt ok with transplant.

The holidays passed quickly as they always do. I got admitted right before Christmas AGAIN. But thankfully got discharged in time to spend Christmas at home. Despite these crappy lungs, my parents and myself were determined to make this a wonderful and memorable Christmas season especially for my little ones.

So there it is, the last coming up on 3 years of my life.

I looked up at my mom and said, “I feel like this is it, like I'm dying.”
Madison Brenton 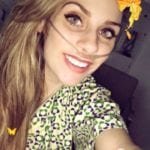