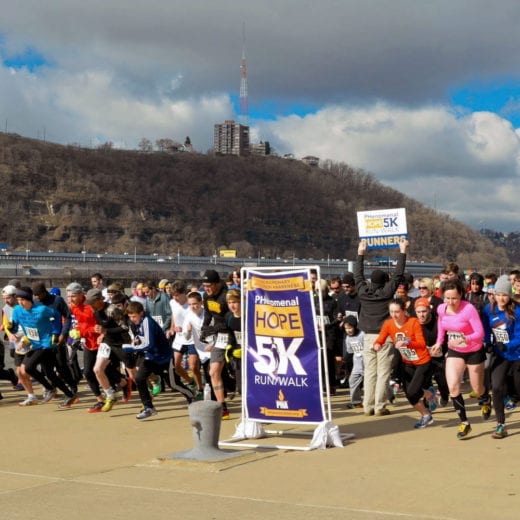 When runners and walkers warm up for the PHenomenal Hope 5k Run on April 10, someone who knows firsthand about pulmonary hypertension will be there to guide and cheer them on. Race Director and founder Julia Feitner has a personal reason for her commitment – she lives with idiopathic pulmonary arterial hypertension.

As runners train for this race, now entering its third year, Julia is working every bit as hard growing this event. “Although I can’t even walk 5k, I am excited to put my energy into creating something that will help raise awareness and money toward a cure,” said Feitner, who was 34-weeks pregnant with her second son when she learned she had the disease. “Pulmonary hypertension is an incurable, often terminal disease, and we are working hard to change that. All proceeds from the event will go toward much needed research to change all that..”

Race day will kick off with registration and check-in at 8:30 a.m. at Riverfront Park, North Shore in Pittsburgh, followed by a 1/2 mile Kids’ Race at 9:30. The 5k Run and 1-Mile Fun Walk begin at 10 a.m. Heinz Field Boat Launch is the start/finish line for all races, with the flat course winding along North Shore Riverfront Trail. Awards for the 1-Mile Fun Walk and 5k Run will fall into gender and age categories. This is a great event whether it’s your first 5K or you’re a serious runner too. In addition to the race, there will also a lot of family-friendly activities and many ways to win prizes, with a visit from the Pirate Parrot and facepainting to a raffle for super prize baskets, all for a great cause.

According to UPMC Pulmonologist Patricia George, sporting events like the 5k Run are ideal platforms to draw attention to life-threatening diseases such as pulmonary hypertension.

“We promote using ultra-endurance sports both to educate people about PH, and the need for a cure, as well as to inspire others to rally to this cause,” said George, co-founder of Team Phenomenal Hope, the 5k Run’s premier sponsor. “I was one of the original four bike racers on Team PH, and it was friends, teammates and people like Julia who inspired me to help found our nonprofit in 2012.”

Feitner, who learned she had PH in 2008, echoes George’s sentiment.

“This type of event really can draw attention to the challenges PH patients face. The pulmonologist who diagnosed me said that he didn’t expect me, or our baby to survive,” she said. “In fact, several other PH centers declined to treat me because they considered my condition hopeless.”

Feitner eventually sought care at UPMC, where she found the right medical teams and a reason to fight on. After a series of medications and a successful clinical trial, she now is able to care for her two young boys and to live a relatively normal life. She said this is the best she has felt since her diagnosis.

“Our efforts through ultra-endurance events, along with the PH community’s hard work and passion, have made Team PH a real success,” George said. “We hope that what we are doing will inspire others to take on their own fundraising and awareness campaigns or to donate to ours. We CAN make an impactful difference in the lives of those with PH.”

Meanwhile, just over one week after the PH5K, athlete Monica Reisz will return to Boston to run in her 5th Boston Marathon on April 20th. From New Zealand to Pittsburgh to Boston, Team PH is racing all over the map. We’ll be posting updates on Twitter and Facebook as she goes for it again on this legendary marathon course.

Please join us in the Pittsburgh Marathon on May 1

As an official marathon Run For a Reason charity, we are excited to be running with 20 athletes in the Pittsburgh Marathon this year. If you haven’t yet signed up to run and want to run with us and help fundraise, please go to our marathon webpage to sign up by March 31. Not running? WE NEED VOLUNTEERS. We’ll be helping at the hydration station at Mile 8 again, and would love you to join us as we support over 18,ooo athletes on race day. For more information, check out our webpage and sign up today.