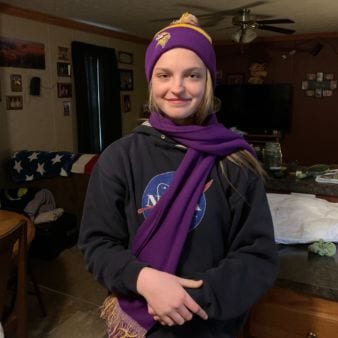 My name is Amanda Howard. I first learned about pulmonary arterial hypertension (PAH) when my daughter Abby was eight months old. A few weeks before she was hospitalized she started refusing to eat and drink. It became a daily chore to get her to eat or drink anything. This went on for a few weeks before I finally got fed up and demanded she be admitted to the hospital.

Abby was admitted to Jennie Edmundson Hospital in Council Bluffs, Iowa, and the next morning they did a chest x-ray. had gone home to get breakfast, and I remember her pediatrician calling me and saying, “Abby’s lungs are full of fluid, I am taking her by ambulance to the children’s hospital.”

I did not realize how bad my daughter’s health was, or what was ahead. Once Abby was at the hospital her pulmonologist ordered a CT scan of her lungs. Abby was back with the doctor for half an hour before they came back up. I was holding her when I noticed her stomach acting very strange. I told my mom, and she lifted up her Abby’s and immediately said, “Get the nurse now.”

I ran out of the room and got the nurse who took one look at Abby and called for a rapid response team. Abby’s room went from three people to about fifteen medical professionals that were all asking questions. I remember one doctor asked where her pacifier was but I couldn’t find it. I remember another doctor saying, “We need to get her downstairs now.”

So they raced her from the fourth floor to the second floor pediatrics intensive care unit (PICU). Once we were there, we were met with forms to sign. It was a form to intubate my eight month old baby. After I signed the form we were kicked out and it seemed like forever before we got to go back. Once we were able to see Abby, she was in a medically-induced coma with so many wires coming out of her tiny little body. Her pulmonologist didn’t know what was wrong, but he assured us he would figure it out.

Later that night after most of the family left, Abby’s vitals started dropping. Alarms started blaring and a code blue was called. We were once again pushed out of the room, and this time the curtains were drawn. It took them a long time, but they finally got my daughter back. Her pulmonologist started calling in doctors, and every time we got our hopes up they would be smashed with a, “Sorry, it’s not on our end,” followed by a hug. Every day Abby was getting sicker and we still had no idea what was wrong with her. She suffered cardiac arrest, multi-organ failure, etc.

A few days later we were called into a private room where we were surrounded by doctors, nurses, a social worker, and chaplain. They asked us to consider signing a DNR order because Abby was on maximum support, and the last option they had didn’t feel optimal. They went on to tell us if she coded again they most likely won’t be able to get her back. If we sign the DNR they would remove life support and our family could come in to say goodbye.

I worked up the courage and asked if she was in pain and they said no, her pain was being managed. After that I said I was not signing a DNR and would not give up on my daughter. Abby’s pulmonologist told me, “I will fight as long as you fight and I will do everything in my power to save her.”

The chaplain asked if he could pray and I told him yes, so he prayed. A day or two after this Abby’s pulmonologist told us he believed he knew what was wrong with Abby, and he called in cardiology. When Abby’s cardiologist came, in he said the words pulmonary arterial hypertension, and he would need to perform a right heart catheterization (RHC) on Abby to confirm. I asked him if she was stable enough and he said no, but if he didn’t perform the test she would die. I signed the paperwork and Abby had the RHC.

Abby did in fact have PAH and she was started on medications and improved. She was discharged six weeks later. She did great for a while, but shortly after her first birthday she once again crashed. This time we were met with her best chance at survival: a lung and heart transplant. We were set to go to Houston, Texas to be evaluated. The day before we left, her cardiologist performed an echo and it appeared as though things had improved, so we didn’t end up having to go to Houston.

When Abby was almost six years old we were told she was healthy. Abby was discharged from pulmonary and cardiology. Then in July of 2017 we were called in for a routine echo and we discovered it was back. Her cardiologist came in and said Abby’s PAH is back and we need to run tests immediately. He pulled her out of everything with exertion because as he put it, “She is a ticking time bomb.”

On September 13, 2017 Abby had a stress test and at the time I didn’t realize how bad her health was. They moved the crash cart and an exercise bike into her room, and we had a doctor, nurse, and two respiratory therapists present. They told Abby to peddle until she couldn’t peddle anymore and she did it. I remember all of a sudden Abby grabbed her chest and started crying. The respiratory therapists picked her up and laid her on the bed. The doctor pushed epinephrine while we were being pushed out of the room. I told my husband Chris to do something and he said he couldn’t. We felt helpless.

I don’t know what happened in the room, but I do know they didn’t want us to see it. On September 15, 2017 Dr. Fletcher called and said he needed to do a RHC immediately. The day of Abby’s RHC we found out she had more lung damage and her PAH was worse than they thought. Abby was on full-time oxygen and medications.

Abby had a second lung biopsy which was inconclusive and autoimmune blood work that came back negative. It was then classified as idiopathic. In January of 2018 we found out Abby’s PAH has progressed again, so a medication was added to slow down the progression.

We did great for awhile but she has once again experienced progression and we are praying and hoping it slows down. She is doing OK, but just has limits.