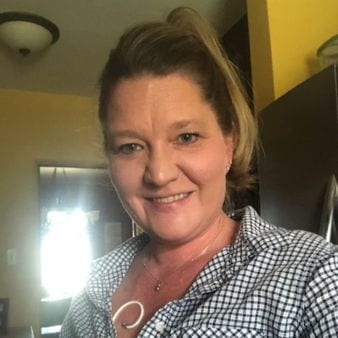 My name is Rebecca Hamilton and I’m from Stow, Ohio. I’m a 42 year old mother of four. I’m married to my best friend, Anthony. We have three daughters and one son; Anya, Katarina, Izzy, and Nico. In December of 2015, I was diagnosed with portopulmonary hypertension. That month would be the best, and also the worst, month of my life.

On December 7, 2015, I gave birth to my son, Nico via c-section under general anesthesia. I was a high risk pregnancy because I have portal hypertension. I had a beautiful pregnancy with minimal complication other than chronic low platelets and a couple varices that had to be banded. His birth went smoothly and I spent three days in the hospital before going home.

It was getting close to Christmas and things were a little hectic with a newborn, last minute gift shopping, and holiday events to attend. At my one week post follow-up with my OBGYN, I told my doctor how I was just having a harder time recovering and had noticed my ankles were swelling. I told him I felt a little winded, too. He said that I had a lot of fluid from the pregnancy and that a Lasix should help with the swelling. I went home and started taking the Lasix right away.

On December 20, 2015, my husband arranged for breakfast with Santa at the Cleveland Browns stadium. I was still feeling quite awful and short of breath, but the swelling in my ankles had gone down some. So, I went to the party anyway because my kids were really looking forward to it. We pulled into the stadium and the steps into the venue were overwhelming. I looked at my husband and said, “There is no way I can climb that mountain of steps.” He told me to just take my time and everything would be fine.

It took me forever and I about collapsed at the top. I sat for a while to compose myself and made it through the brunch and activities. I remember crying on the way out because I had no idea how I was going to be able to get back to the car with those steps. My husband was able to arrange for an elevator ride to an authorized area where they pulled our car around so I could go home. I sat on the couch when we got home contemplating on going to the emergency room. I felt terrible! My husband convinced me to wait until the morning when I was going back to the hospital to see my OBGYN for the follow-up of my swollen ankles and being on the Lasix for a week.

On December 21st, I went to Akron General and met with my OB. I told him I could barely make it inside the hospital and had to stop four times to get back to his office. I told him something is not right and I would not leave there until something was done. He agreed and immediately took me over to the maternity triage ER and had them check me in. He was concerned that I had a blood clot from the delivery.

Some tests were ordered, and I had an echocardiogram while in the ER. After a short while, four doctors came into the room and told me the news. They said I have pulmonary hypertension, but that they would need to admit me and perform a Right Heart Catheterization in the morning. I had no idea what any of that meant, but was told I would be admitted to the ICU, and what was happening to me was very serious.
The RHC was performed the following day, and I was given confirmation that I had PH. They were going to start me on an IV Infusion therapy called Veletri. I was told at that time this disease was permanent, and that there was no cure. The pulmonary NP said she was very sorry and that my condition was very serious. At that moment I couldn’t comprehend what was happening. I had this newborn baby and three other children at home. How could I have this fatal disease?

While in the hospital, I had a bit of a bumpy road. I was on a medication called Nadolol for the portal hypertension, and as I was titrating the third day, my BP plummeted to 58/14. My husband grabbed a nurse and told her that there was something seriously wrong. Another team of doctors came rushing in past my husband and had to save my life. My kidneys were shutting down, I was in liver failure, and complete heart failure. At that moment, my husband knew that I might not make it. Miraculously, I made it, but had a major set-back on the treatment plan.

All I wanted was to go home for Christmas. I wanted this nightmare to end. Instead, I was transferred to the Cleveland Clinic in Cleveland, OH to start the process of stabilizing me. I would spend another seven days before I’d finally get to go home.

So here I am now. I am doing well on Veletri and my pressures have gone from 80 to 33. My PH doctor and my liver doctor feel that I am in a good position to start the referral process to have a liver transplant. They think that if the portal hypertension is resolved that the PH would resolve with a transplanted liver. I’m not really sure how I feel about it or which road I will travel down, but I have started the process to see what the risks, benefits, and outcome could be.

A POPH diagnosis has shaken our family to its core. I try to keep a positive attitude and continue with a normal life as much as possible. I am very lucky to have such a loving husband and family. I will continue fighting this disease. I have to. My journey has just begun.

4 thoughts on “My Journey Has Just Begun: Rebecca Hamilton”