My Journey to a CTEPH Diagnosis: Trace Cluck 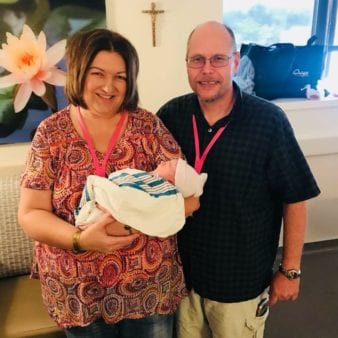 My story with PH began years ago. In 2005 or 2006 I was misdiagnosed with pneumonia, bronchitis and asthma. I was in and out of the hospital but despite multiple doctors visits and hospitalizations. I would only feel better for a short time, and would often have recurring symptoms of chest pain and shortness of breath. At times, it seemed I couldn’t take a deep breath at all and had very little energy.

A few years later I was diagnosed with my first Deep Vein Thrombosis and another year after that I was diagnosed with my a pulmonary embolism. All of these issues were causing me to miss a great deal of work, but more importantly, time with my family and children. The doctors discovered that I had a clotting disorder and told me that I would be on blood thinner for the rest of my life. To complicate matters, I was diagnosed with juvenile diabetes at 21 which seemed to add to my many problems.

Finally in 2012 my health began to deteriorate even more. In October of that year I began to cough up blood at work. I couldn’t catch my breath and was rushed to the hospital. After several tests I was again misdiagnosed with pneumonia, and they also found a mass in my chest and decided to admit me. They removed several blood clots from my lungs but after only half an hour I couldn’t catch my breath again. I was released on antibiotics and had three follow-up visits with a pulmonary specialist. They kept telling me that the pneumonia was getting better, but I wasn’t feeling better. I continued to cough up blood and by then was not only experiencing chest pain and shortness of breath, but I couldn’t walk from my bedroom to the kitchen without having to stop and catch my breath.

I spent both the Christmas of 2012 and New Year’s 2013 coughing up blood. By this time, we knew so much more was wrong, but didn’t know what. My wife decided to take me to a different hospital to see if they could figure out what was actually wrong. After a very long week of more tests they determined that I had CTEPH which is blood clots in the pulmonary arteries. The only cure for CTEPH was a very risky PTE surgery in San Diego, California. I was put on the waitlist and had PTE surgery in October of 2013. I stayed in the hospital for 30 days, but the surgery was a success!

For a year after surgery I was able to enjoy activities with my children that I hadn’t been able to in years. However, in 2014 I began having CTEPH symptoms once again. I continue to struggle with chest pain, shortness of breath and blood clots. I am very thankful for the doctors in San Diego and we continue to pray for a cure.