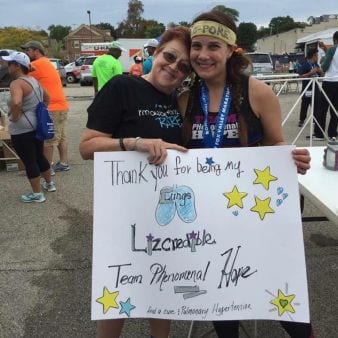 My name is Lynn Bastian. I am 63 years old, and was diagnosed with Idiopathic Pulmonary Arterial Hypertension on October 28, 2005. My story is similar to many with this incurable disease. I was misdiagnosed until a fluke led a doctor to x-ray my lungs for an unproductive cough. He found a shadow in my lung.

I had been experiencing increasing difficulty in walking any distance, light headedness, shortness of breath, and feeling as though I was going to pass out. I was finally getting serious about losing weight and getting physically fit. Long story short, the shadow was my pulmonary artery, which should be big around as your little finger. Mine is more like the width of my wrist.

Many tests later, and we are still not sure why I have this. Nothing else has been defined as a cause for this disease. I started treatment in February of 2006. Ironically the night before I started IV Remodulin, I was at a combined birthday party for my niece Elizabeth Scott Montgomery, her brother, and two cousins. Liz’s birthday is in February and so is mine.

Years later… Liz likes to run. She does Ironman competitions and Warrior Dashes, as well as 5Ks, 10Ks, and marathons. Last year she joined Team PHenomenal Hope and the #LetMeBeYourLungs program. She wanted to run to bring awareness to PAH, fundraise for Team PH, and be my lungs. She ran the Fox Valley Marathon in St. Charles, Ill. in my name on September 17, 2017. The day was HOT and sunny.

About a quarter of the way through, she twisted her ankle, which she had injured prior to this race. But, she DID NOT QUIT! I decided to try and find her as she ran by at about the halfway mark. We had signs to encourage her (and the other runners), and after she passed our point we drove on to the finish line.It took her about six and a half hours to finish, but she did it! I wanted to walk her across the finish line, but in a final burst of speed she left me in the dust.

I can’t even WALK for 6 1/2 hours much less run 26.2 miles on a bad ankle in 90+ degree weather. I never understoof how much goes into running a marathon: training, participating in smaller events, and all regardless of the weather. I remain in awe. I still can’t believe she did this for me! Words cannot describe my feelings, but there is leaking from my eyes.

I try every day to bring awareness to PH. Most people do not even know about it (myself included) until they are diagnosed. I was shocked to learn that after eight years, you are considered a long term survivor! I have had 12 anniversaries. My family and friends have supported PH by donating funds that help patients and bring awareness to the disease so that there can be EARLY diagnosis. The earlier you get that, the earlier you may start treatment. I want EVERYONE with PH to live way passed eight years.

There is still no cure. It is a progressive disease and at best you can halt or slow down the progression. My course of treatments along with support from family friends and the medical profession has helped me get this far. I’m not ready to stop! As long as my niece and others are giving themselves to help us, I will not give up!

Unless you have compromised lungs, I don’t think you can understand what a big deal this is! Thank you Team PHenomenal Hope. Thank you to their #LetMeBeYourLungs program. Most of all, thank you Liz Scott Montgomery, my niece, mother of 3 (almost four!), for being my lungs. I love her dearly and will never be able to thank her enough.