My Road to Transplant and Recovery from IPAH: Dan Kolopajlo 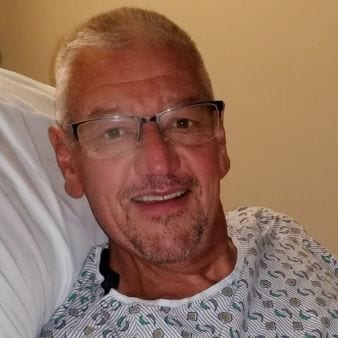 My name is Daniel Kolopajlo and I am 56 years old. I was diagnosed with functional class four, idopathic pulmonary hypertension on September 1, 2011, exactly one year after moving from West Virginia to Florida. I was given a two percent chance of survival over a six month period if treatment failed.

On September 3, 2011, a central line was inserted in my chest wall to administer the PH therapy drug, Veletri. I was also prescribed a slew of other therapies and medications, all meant to help my heart and lungs.

In December 2013, knowing my future survival would mean a double lung transplant we began our transition back to the Ohio Valley. First, I was accepted as a patient at UPMC’s Comprehensive Lung Center in Pittsburgh, PA which is located one hour from our Ohio roots and family support. We then sold our home and moved back to Ohio in November 2014.

In 2017, my infused veletri therapy was switched to remodulin. However, as is common with PH, my symptoms continued to progress and my health and quality of life was declining. In January 2019, my routine evaluation indicated that my pulmonary pressures as well as my cardiac indexes had increased to the point that I was in need of transplant. Following all the necessary testing and paperwork, UNOS placed me in the top 10 percentile and listed me on February 27, 2019.

On April 15, six weeks after being listed I received the first call for transplant. After rushing to UPMC and waiting for many hours, I was sent home as the donor lungs were not viable due to pneumonia.
Three weeks after the initial call came the second call. Again, I rushed to UPMC with high hopes this would be it. However, I was set home more disheartened than the first call as the donor lungs were heavily contused and compromised.

The third call came June 3, however it too came with devastating news that it was another cancellation. During this run we were informed that my heart was rapidly failing. The right side of my heart was grossly enlarged.
A fourth call for transplant was received, on June 19 and again the donor lungs were not viable.

I am now three months post double lung transplant. While my PH journey is coming to a close, I am on a new journey that will include organ rejection, being immune-suppressed, and all the ramifications that come along with each. Over the course of five weeks, I experienced a full circle of emotions, the most prevalent being thankful to my donor for the gift of life he so unselfishly gave to me. I will therefore approach my new path the way I approached PH: Head on with a burning desire to survive and beat the odds.

Dan is a recipient of the Unmet Needs Fund. Learn more about how this fund supports PH patients at teamph.org/unmetneeds.