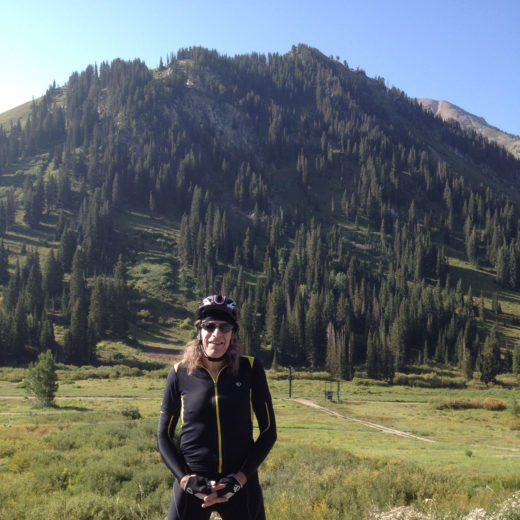 At the end of January, as Pittsburgh and Boston settle into their short, grey days of icy rain and snow, four cyclists will be heading to New Zealand to race bikes. It’s not all fun in the sun for these racers, though, as they will race the grueling Pioneer mountain bike stage race to represent Team PHenomenal Hope and bring further awareness to Pulmonary Hypertension. Not only will they be racing for patients in the United States, but for those afflicted with the condition in New Zealand and around the world.

Team PH will be split up into two sub-teams, just like Race Across America. The first pair of racers is Patty George and Harrison “Hap” Farber. In our next blog post, we will introduce the second pair, Kristen Engle and Thea Kent.

Neither Patty nor Hap have raced in a series like this. Patty competed in Race Across America, Race Across the West, Paris-Brest-Paris, and other multi-day races, but never a multi-day mountain bike stage race.

“This will definitely be outside my comfort zone,” Patty says, “and I’m pumped about that.”

Hap, while having never done a major series race like this, is no stranger to ultra sports. In fact, “ultra” might be one word Patty used to describe him. “I remember when he skied this incredible endurance downhill ski challenge, skiing a leg-busting 101,376 vertical feet in 8 hours in unity with Team PH.” And although he has a long list of endurance race accomplishments, perhaps the most memorable is when he ran across the USA on a 10-person relay team. And with this race, Hap has high expectations: “Bust my ass, have a great time, and finish smiling!” His personal goals are in line with those expectations. Being completely out of one’s element in a new country, experiencing a new form of bike racing, having grounded, yet optimistic goals is a sure way to keep a clear head during a tough race. “Patty and I will have a great time, take in some great scenery, and finish strong,” he says, adding that a major goal is to “help push the awareness and agenda of the team.” Patty, having a bit more experience with longer bike events but still excited for the new challenge, says her personal goals are to race her heart out with Hap, Thea and Kristen and push to new limits.

As always, the whole Team PH crew is working to support their common goal of spreading awareness and raising money. “Anything to raise awareness of the disease is a plus,” says Hap. “Team supporters can spread the word, donate, and get their friends to donate.” In addition to awareness, though, the team hopes this will rally the PH community, especially in New Zealand.

“My bigger goals for both myself and this team is to connect with patients, to let them know we race for them, and to raise funds and awareness for PH,” says Patty. “I hope we raise a ton of money to support research. We are aiming to raise $15,057 total, that’s just $1 per meter climbed. So we need YOU!”

With almost 50,000 feet of climbing ahead of them, Patty and Hap need to not only strengthen their legs, but their hearts as well, in order to push forward on those difficult ascents. While the hardest things in life Patty has endured have been out of the saddle, the most difficult experience on the bike she can remember is the Ohio 600km brevet, which was the last qualifier for Paris-Brest-Paris. “This was probably harder than Race Across the West and harder than Paris-Brest-Paris itself. The second day my feet were in pain, on fire, and after only 3 hours of sleep after 400km on the first day in endless rain and cold and finishing that stage after midnight, I was tired and slow.”

Like with all great moments of sportsmanship, it was the support of her team that got her through it. “I got through it because of Pascale Lercangee, my teammate who drove up to ride with me starting at 5AM. We had fun talking and riding through the hilly Ohio countryside. It was a ride I’ll never forget, and a kindness from Pascale I’ll also always remember.”

With the camaraderie that is surely only to get stronger during the course of this race, hopefully Team PHenomenal Hope can dig deep and support each other during those long climbs ahead, and when they come out on top, have something to look back on as a difficult thing that did not beat them.

To join Team PHenomenal Hope in their race to make a difference, click here to donate today!