Our Truly PHenomenal Journey in Brazil 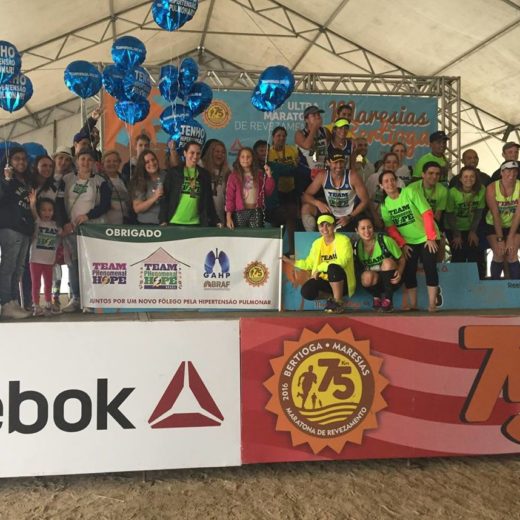 Life begins at the edge of your comfort zone. Sounds cliché but its something I have learned to be so true it’s petrifying at times. A year ago almost to the day I started a journey that has changed lives forever, and it all started by saying yes to racing an ultramarathon in Brasil for Pulmonary Hypertension (PH). Courage is taking the first step, even if you can’t see the path ahead, and that’s what I did. Here is my recap of the most incredible year in pursuit of honoring, fighting for, and raising up those with Pulmonary Hypertension.

Maresias to Bertioga is a 75K (46 miles) point to point race in Brasil along the beach. Team PHenomenal Hope Brasil invited 3 athletes from the United States to join their team in their goal of petitioning Brasilian federal government to provide dignity to pulmonary hypertension patients, and to review and revise their Federal Medical Protocol to allow patient’s access to all therapies available worldwide, isolated and/or combined. The work Team PHenomenal Hope Brasil does is critical to the future of patients living with Pulmonary Hypertension and those not yet diagnosed living in their country. I was apprehensive at first because I had never dreamed of running an ultra marathon and honestly wasn’t sure that I had the ability to do it but I knew that with a cause this great behind me and driving my energy, I couldn’t possibly fail. And with that myself and two other USA athletes started training for our first ultramarathon.

Fast forward to October and our team of three had been through a lot. I had a stress fracture over the summer, Mike had gotten really sick and missed a few big runs, and Christian’s knee had gotten hurt at a trail race and it was still lingering. But we didn’t let it stop us and we were determined to do what we had to so that we could race for our patients. Every training run where I felt I wanted to stop or couldn’t go further I thought of our patients and how every morning they get up and they fight because they don’t have a choice. I am blessed enough with good health and the ability to use sports as a voice to help raise awareness, inspire others, and move our mission forward. It’s a gift that I have chosen to use for something better and that’s what helped with every mile and every hard day.

We had an army in Marisias as we prepared for the biggest challenge for Team Phenomenal Hope USA and Brasil- in fact over 50 people in total. I was in awe of the work that Paula had put in for this race and the amount of people she had involved along the way. She is the true definition of a leader and passionate advocate. You can feel her energy as soon as she walk in a room and she has a way of getting everyone excited and ready to go and I really admire that in her. She has been through a lot in her own mother’s battle against PH and she has come out positive and strong willed and fighting. Her army included:

To prepare for the extra strength we would need throughout the run Mike, Christian, and I made ribbons with all of our #LetMeBeYourLungs partner names on them so that we could carry our entire USA team with is for the race. The morning of the race I posted a photo on Instagram of our 2 teams in our USA Jerseys with the quote “It’s okay to be afraid- it means you are about to do something really really brave” and I used that as my mantra for the day. The honest truth is I was scared to death but there was no turning back now.

Race day seemed to fly by. I guess some of the biggest days of my life seemed to be gone in seconds and this was no different. I had mentally prepared for that as I knew to expect it since it had happened with Ironman, my wedding, and other milestones. We arrived at the starting line in the pouring rain at about 4:30am to get situated. As every second ticked towards the start of the race I could feel my heart beating faster and faster in my chest and right before the gun went off I burst into tears, soaked up the moment and started my journey.

The first 3K was up what felt like a mountain. To put it into perspective it’s about a 1200 foot climb and took me about 28 minutes to run up because it’s a winding road with switchback after switchback and just when you think its almost over it kept going. After that the road flattened out for a while and before I knew it I was at my first control point where my amazing support crew Cibelle and Natalia were waiting for me. The race is unsupported so each solo racer has a support crew that follows and meets about every 6-10K with supplies. Without the support team the racer is essentially stranded so they played a huge and essential part in the race and my success.

The next 15-20 miles were all on and off the beach and road. We would run on the beach for a little bit and then head on the road for climbing and then back on the beach. I looked forward to every control point because I knew I would see smiling faces from my support team and fresh socks and food. The rain really made it hard because no matter what we were soaking wet and I had really bad blisters on my feet. Right around the marathon I got a jolt of energy when I saw a group of patients holding an “Obrigado” sign saying Thank You. I cheered so loud as I ran past and said “thank you” back. I remember thinking “This is what it’s all about” as I am sure I wiped another tear from my eye as I kept going.

I started to get really nervous after the 26 mile mark. At that point it was the furthest I had run in training and the terrain really started to get nasty. The mud was calf deep in places and the water up to my hips in others as we crossed through the back trails and beaches. Every time I finished a trail portion I would run into the ocean to rinse off and try to keep my feet in good shape.

At mile 30 I started dedicating each mile to one of the names I had pinned on my pack. I had thought about all of the patients during the race but I really needed to dig deep in those miles to continue to make it through because it was getting harder and harder. I kept thinking about the fact that everyday can feel like a marathon but they can’t choose to quit. Their only option is to keep going and to keep fighting and so that’s what I did. Finally I told myself that if I could run 1 mile I was “allowed” to walk for 1 minute and that helped me mentally prepare mile to mile as it got harder and harder.

Before I knew it I was at the final control point with 6 miles to go and Natalia and Cibelle told me I was going to make my goal of under 10 hours and that all of the patients and team was waiting for me at the finish line. I was so happy that I got a rush of adrenaline and started back on my run. This time my focus was 100% on getting to the patients and being able to hug and embrace their love and support. So one foot at a time stopping once per mile I forged on.

Finally in the distance I could see my husband Christian and he told me I was close and to “run it home”. I don’t know where I got the strength but I felt like I was flying. I was flying to the team, to the patients, to the finish and I was so excited that I could feel all of the love and support pulling me closer and closer with every step. I honestly don’t remember actually crossing the finish line and it was all kind of a blur but what happened over the next hour changed my life in a million ways.

Once I finished the race I was greeted by patients who had traveled as far as 10 hours to the race to see us finish and to cheer us on. It was incredible that even though the language difference was a barrier at times “thank you” and a hug can say it all in any language. As each of our other runners made it in I could feel the energy building as we all awaited for our fearless leader Paula.

About an hour later with the team behind her, Paula ran through the finish shoot with a crowd of cheering patients chanting her name. They had been waiting all day and they greeted her with open arms and the biggest hugs I had ever seen. There were so many tears and smiles and hugs that it was one of the most positive moments I have ever experienced. It let me see just how much what we were doing meant for these patients and how much they appreciated and held onto it. It was very overwhelming and just thinking about it and typing it makes me teary all over again.

There aren’t enough ways to describe the experience and the journey our two teams have been on over the past year. It almost seems sad that the journey has ended in many ways but still remains in others as Christian and I are already starting to plan when we can go back and visit the team to race together again. But more than that I really hope that this (all of it) will inspire patients and other athletes. I hope that they will see what we have been able to accomplish and this extraordinary experience and say that because of us they didn’t give up, or because of us they are going to follow a dream of their own.

Ultarmarathons, Ironman, running, or anything physical for that matter is not a superhuman feat. Anyone can do it with hard work and will. That’s really the message I hope stays with anyone that reads this recap. YOU CAN ACHIEVE ANYTHING YOU SET OUT TO. That’s what Team PHenomenal Hope is all about. People using their abilities (whatever they are) to spark, inspire, and create change. It’s changed me, and I am certain it’s changed everyone we’ve touched so far as well.