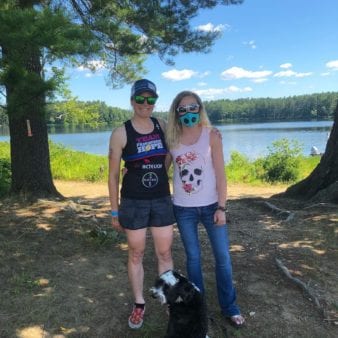 Biking has been in my family for as long as I can remember. It all started with my mother and father. Even when they were dating, they rode together. As soon as my two brothers and I were old enough, all five of us would go on bike rides, we children decked out with our training wheels and our cartoon-character helmets. It wasn’t until later that my mother and father would learn how crucial biking would be to our family’s future.

Throughout all the biking we would do as a family, I was always the last one in our little gang. My parents just thought it was because I was smaller than my older brother, Charles, but when my younger brother, Harrison, was born, they became suspicious something was wrong with me. Along with being the last in our little gang, they also noticed I would become short of breath easier than my siblings and would turn blue when exercising. It was because of biking that my parents were persistent in figuring out what was wrong with me.

I was four when I was diagnosed with pulmonary hypertension (PH) at the University of Michigan. At first, my parents were in shock and were told that I would only live four more years. Of course, this was unacceptable to them, so they sought help outside the state. That led us to New York City, where we were able to receive treatment for my PH and live a relatively active life. My parents never told me I couldn’t do something. Growing up, I biked and participated in cheerleading, volleyball, tennis, and band. When we would bike, my father and I had a system. He would push me up hills or even flats when I needed a break to breathe, which was relatively often. This way, I could feel part of the family and not be left behind to struggle.

Twenty-four years after being diagnosed, I was finally put on the transplant list for a new heart and lung at Brigham and Women’s Hospital in Boston. My previous PH physician in New York City had retired, and we had been seeing Dr. Waxman at the Brigham for 10 years. I was listed in October. In February, my health declined to where I needed to be hospitalized and put on high-flow oxygen. The thought of being locked up in the hospital until the transplant didn’t have me jumping for joy, but I also knew it was the only way I would survive until we received “the call.”

I worked with Dr. Waxman and my friend, Julie Tracy, to make sure I had access to a stationary bike when hospitalized. The stationary bike was a way for me to stay sane while waiting for the transplant in the hospital. It also provided me with another way to exercise besides walking around the hospital floor. Mountain bike YouTube videos became my favorite as I would play them while on the stationary bike. It was my one outlet, my one way to imagine being outside. Then, on March 25th, the day I rode 15 miles on the stationary bike for a fundraiser back home, I was offered a perfect set of organs.

Over the next three days, I went back and forth to surgery and thoracic ICU at the Brigham. Eventually, they closed my chest, I was extubated, and the stationary bike was taken away due to sternal precautions. I am now five months post-transplant and rode 12 miles with Dr. Waxman and Julie Tracy and 20 miles with my mom, who is visiting me in the Boston area.

Biking now is different. Instead of being short of breath, I have that lactic acid burning sensation in my muscles. Dad no longer has to push me up tiny hills. I can climb them on my own. I like to think of my heart-lung transplant as sort of taking one engine out and replacing it with a new one. I have a new engine now, and I cannot wait to see how far and fast I can go! 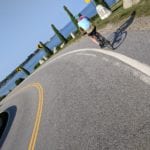 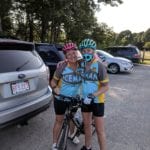 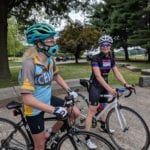 One thought on “Pedaling My Way Through Life Post-Transplant: Camille Frede”