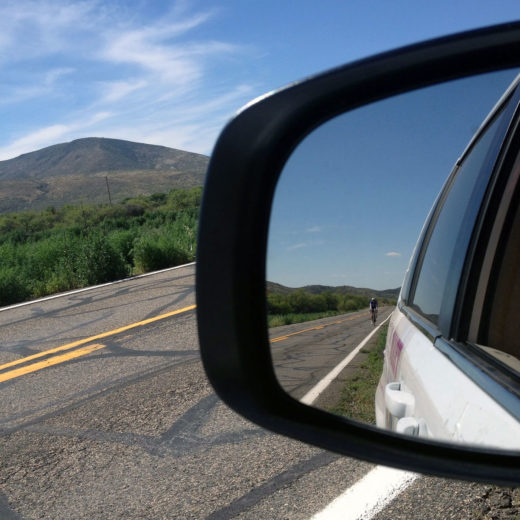 I later lost this hat in Squaw Valley. Donations being accepted to reconnect me with a hot pink cycling cap.

Guys. GUYS. I didn’t tell you about Race Across the West.

When I signed up, I was interested in spending a week with my sweetie, who works so hard (I go through phases of working hard and being a bum. Right now I’m kind of a bum) all the time and I don’t see him nearly as often as I’d like. We work well together, which is a big plus in something like RAW.

I was also excited to see the American Southwest, my favorite landscape, including some parts and parks I’d never before experienced, or had never seen in the day time. I thought maybe I’d get some photos and stories out of the event. I did, and I’m slowly working through the process of organizing them all in my head, as this summer has been such an incredible whirl wind.

What I was surprised to gain exposure to, however, was something I’d only thought I knew anything about, and something that didn’t initially strike me as all that interesting, frankly. By far the most mind blowing part of the race was getting to experience the gut wrenching endurance of athletes, teammates, and friends, and the personal sacrifice that comes from truly working and thinking as a team.

Last year when Team Phenomenal Hope raced Race Across America (RAAM), the team was made up of a very large crew with two suppose vehicles, an RV, and a media support vehicle; there were four racers who worked in pairs for three or six hour shifts, rotating every twenty minutes for those six hours and switching off with the other pair.

This time, we had the two support vehicles and a van of off-shift crew members, and only two racers who raced for roughly twenty minute pulls with no real downtime except at night when they would each ride for longer stretches to allow the other to achieve some version of sleep in a moving vehicle.

It was the hottest race in years, with each day hovering at about 113° with no shade or cloud cover

It was the hottest race in years, with each day hovering at about 113° with no shade or cloud cover as we pushed through from Oceanside, California all the way to Durango, Colorado. In the Mojave Dessert, sand dunes pushed up against the road way, spilling into the line of traffic and causing chaos as crew teams scrambled to direct their racers out of danger.

I was on shift at this time, and it was the middle of the night as the peloton came through, the solo racers RAAM and RAW racers, and some of the RAW teams, the solo racers all bunched together for camaraderie and safety, though their support vehicles were caravanned behind them illegally.

Our racer struggled to find a good line in the confusion of so many racers and vehicles, without getting separated from us. We held onto her wheel as she stayed in our headlights, and as called out whatever sand we could see in case we had a better line of vision, able to pull our eyes up the road ahead a bit, to the furthest line of our lights rather than directly under wheel.

I believe it was the next day when we went through Arizona and its blazing, unrelenting heat. Arizona is, frankly, a rather unwelcoming state, especially for cyclists, though it does have its unyielding beauty and some kind and generous residents. and I met a couple at a gas station who had left their homestate of California for the first time ever in a road trip to visit the boy’s sister in Denver.

“It’s really something out here, isn’t it?” I asked the girl while she admired me tattoos and I scanned her scabs with a worried glance. Chuck, my crew partner, had just given her $10 and her boyfriend was scratching a rash and swearing under the hood of their old Durango.

“This is the worst place I’ve been to in my life. Everyone is mean, no one wants us here. I just want to make it to Colorado and be done with it.”

She then took me to her dog, who was tied with a rope to the hitch. I gave him a few pets and tried to calm him down when he started jumping. She scolded him and the pup turned around and bit her on the arm. It started to bleed a bit. I frowned again and asked if I could get her some ice for it.

“This place sucks,” she said, kicking her truck tire. “Even pooch hates it. We gotta get out of here.”

She turned her back on me then just as my racer was coming out of the convenience store in a fresh chamois to start her next ride shift. Life goes on.

Somewhere outside Prescott, I believe, one of the riders started to experience heat exhaustion and mental fatigue. It’s hard to watch someone for whom you have come to care deeply sink into what is a dark place in the psyche, knowing from experience that there’s no real way to be pulled from that place but to be convinced to do so on one’s own, and that’s a difficult feat on both sides. Matched with the unrelenting heat and sun, the brutal climbs, descents, and flats, and the basic struggles that come with being a human being with our complications and backstories, it was an immensely difficult day for my rider.

Her teammate, however, dug deep into that same well of human spirit into which my racer had sunk, and found her own strength to ride through, doing longer pulls without complaint of sign of wear.

It was one of the most impressive sites I’ve ever seen, and I was so proud to be a crew member for Team PH as these two women communicated and worked to support one another during this very difficult shift.

At the Walmart in Prescott, we took a team break for some IV fluid, shade, and much needed rest. No one had had a proper meal in a long time so some of the crew members who were on the rest shift set out in search of pizza, only to discover the only pizza place in town was a “bake your own” type of establishment. Someone from the town invited them into his home, a mansion in the hills of Prescott, to bake the pizza there, and ultimately all was right with the world.

My racer wasn’t depressed, she was having a mental reaction to being in a physically dangerous situation; however, being a person who lives with depression myself, I was at a good vantage point to talk to my rider who was struggling with moving forward in this very difficult race.

Perspective is important. Not only the rider’s perspective on her performance, race, numbers, and achievements, but the crew’s perspective on how to take all of that into account with the (rather unfair) pressures we put on ourselves—not only as an athlete but as a person—to conquer ourselves, always put out better wattage, faster mileage, more impressive numbers.

It’s easy to forget to look up from the GPS, and it’s just as easy to forget how difficult that can be, and how tricky those numbers can be when they ultimately mean very little.

Perspective means the ability to look up and see the fantastic view, and to know that that’s what someone is missing, because I’ve too been a person who was unable to see the incredible mountains and valleys and now that I can, I know how breathtaking it is, how much of my life depends on being able to see it. I’m speaking at once metaphorically and literally here, because our racers were passing through such incredible landscape, and were truly moving along at an impressive clip too, averaging 20mph, and I was fortunate to see all of it from the driver’s seat.

After our pep talk and pizza break, my racer took a long pull to give her teammate some much deserved time off the saddle, and put out one of her best rides of the entire race, Garmin-free. I feel fortunate to have been able to be there. While our own inner struggles are different, it validated my own complicated self to put my depression in perspective and to give it meaning.

Without that vantage point, I may not have known to kick everyone out of the RV, to give her what she needed, to know that its impossible to replay last year’s race but that this year had its own saviors. Instead of ice cream it was pizza, instead of six hours in an RV it was five minutes in a kiddie pool. We take what we can and I understand that, as a person who is constantly working to find out what works and make it the best I can. Isn’t that all that any of us can do?

The rest of the crew had the knowledge to administer an IV, fix the flat on the van (which I had kept filled with the bike pump until we were at this stopping point), communicate with our fans and supporters in a cool manner to keep everyone happy and appreciated, and communicate with all the crew members to make sure everyone is on the same page. We each had our role, strengths, reasons for being there, and I’m proud to have been a part of that.

I’m really so proud of everyone involved and have more stories to share, and I can’t wait until the next chance to crew for an endurance race. Hopefully I won’t be needed past pumping tires, charging lights, refilling water bottles, and driving the van, but it’s nice to know we all have our small worths.