Randonneuring and the Art of Finding Your Way Home Again – 300km 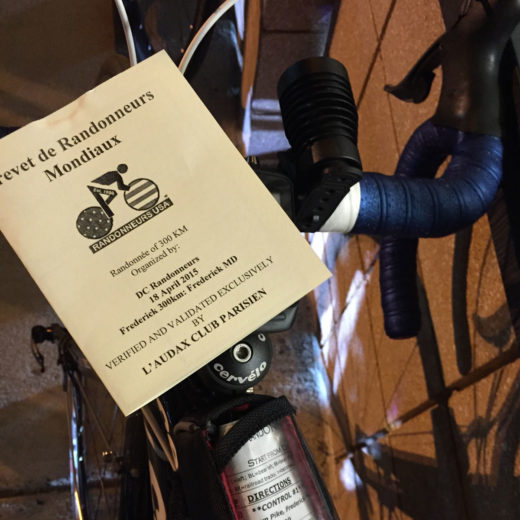 Scanning the calendar for the next event, the 300km qualifier, I looked at the weekend and found a perfect ride: the 300km Maryland Ride put on by the DC Randonneurs. It so happened that I would be in Washington DC for work on a Thursday, and so I extended my trip, working remotely from my favorite coffee shop in Annapolis on Friday and then heading to Frederick where we would hit the road at 6AM on Saturday.

This trip also allowed me to ride in Washington DC the evening after spending all day in a windowless room in a hotel, after having used every neuron for the duties asked of me, and this was amazing. I rode by the Lincoln Memorial, Smithsonian, Capitol Building, and White House, and I rode with – for a bit – Nancy Pelosi’s speechwriter who was making her commute home. We talked bikes and such, and that was pretty cool.

Friday after working at the coffee shop I hit up my old haunt, the Baltimore-Annapolis Trail, and enjoyed sitting on a bench on the dock, the RAAM finish line. So many good memories from that place so I let them wash over my mind like the tide in the bay.

And then the brevet… So this time we met just after 5AM, and there were probably around 30 people gathering in front of the Days Inn and Waffle House, preparing to ride. All in their reflective gear and with reflective smiles, the group got ready. After inspection with brevet card in hand, I rolled out with the group at 6AM sharp. This time we would head out of Frederick to the Cactoctin Mountains.

When you ride these brevets, it is always something leaving before dawn. You start even before the birds sing their morning chorus. It’s cool. It’s really dark, except for your headlight and the lights of the people around us. Then the birds wake up, and then this rim of light appears on the horizon, and sunrise takes a slow gentle time happening, and you just take it in. Morning is truly my favorite part of the day – on and off the bike.

As we climbed the mountains out of Frederick, the sun had come up, and my mind was going back and forth between “solving the world’s problems” (or mine anyway) and the beautiful scenery around me. I’m not in the best place when my mind churns through issues, and riding is something I do to try to escape this. But sometimes, when you’re alone on the bike, it is you, your thoughts, and 186 miles ahead. So for much of this ride, I worked through the mental aspect of things. People don’t seem to write a lot about the mental part of cycling, but this is actually a key part of it all. The mental strength is needed whether you’re racing in a short race and needing to keep on top of your game, or whether you’re riding over 100 miles and need to stay focused and positive when things start to hurt (because no matter who you are, when you get into ultra distances, there is always some threshold where things will start to hurt).

At the control I met up with other riders, was brought back into the ride itself instead of my mental world, and was grateful to be with the group again.

We rode north into Pennsylvania, through the Michaux State Forest, then riding among apple and pear orchards in truly beautiful green rolling farmland. After the turn around near Carlisle, PA, it was time to head back.

The group had split up again, as it often does on these rides. I was focused on getting back safely. Around 140 miles my mind was attuned to my feet where I started feeling the most intense foot pain or “hot spots.” Hot spots are places where you come into contact with the pedals, one repetitive motion after another and it starts getting inflamed. The best way to relieve them is to stop pedaling, but when you’re 40 miles or so from the end, that can’t really happen. I did get off the bike and sit in the shade for a bit, massaging my foot to try to stretch and relieve them. It was going to be a long last 40 miles home. But the pain brought my focus right into the present moment of each pedal stroke of the ride, so the irony was that I welcomed it. It was exhilarating despite slowing me down.

As I closed in on 30 miles from the end I saw my Garmin was about to die. Yes. It had been low battery for a while, likely due to my having used some power-sucking settings with the backlight, or the effect of the turn-by-turn, not sure. But what I did know was now I was almost without a way to even go from the cue sheet, because I didn’t have an odometer to help me mark “Turn right in 0.7 miles” for example. So in my mind I was troubleshooting…. My iPhone, thankfully, had power so I fired up Strava as my backup map, and then – even more thankfully – some of the DC Randonneurs rolled up on me. I had thought they were well ahead of me, but they had stopped for pizza, so this was my new good fortune. I felt like they were the cavalry.

“Boy, are you guys a sight for sore eyes!”

We rode together into Frederick. I drafted comfortably off Mary and Ed, on their tandem, and we talked and shared stories back into town. These people, by the way, are super cool. They’ve ridden Paris-Brest-Paris (PBP) and other epic rides, are preparing for some major touring out West, and are just super fun to ride with.

I noticed Mary snapping photos on the ride and asked her if she blogged. She said yes – she writes the blog “Chasing Mailboxes.” I joked (well half joked) that I was star struck (because it was really cool to meet the author of this blog.) You see the irony is I read that blog, took her coffeeneuring challenge – love her writing, which is possibly part of the reason I’m even doing this randonneuring at all. If you’re at all into distance cycling, read her blog. If you’re into good writing about adventures and life, read her blog. And you’ll find her post about the ride that day here.

We rolled into the Days Inn, our final control. And the foot pain melted away as I sat in the lobby, endorphins now rushing over me, laughing and chatting with the other randos. It was quite a day, and we celebrated our finish as well as people who continued to roll in. That evening I had the best shower ever, ate a victory dinner at the Waffle House, and had the best sleep ever. The 300km brevet behind me, I was now ½-way to qualifying for PBP.