Randonneuring and the Art of Finding Your Way Home Again – 400km 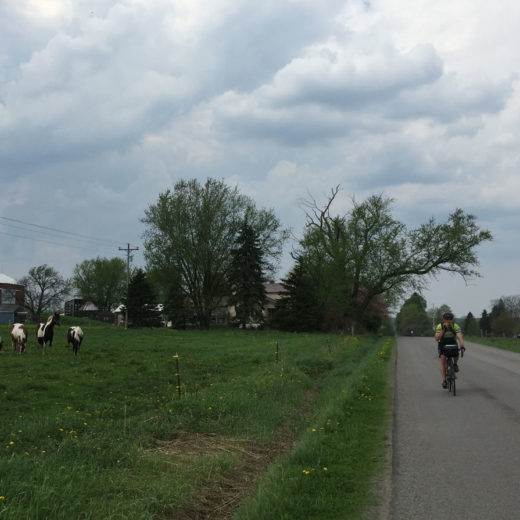 This is the last of a 4-part series about my first 3 qualifying rides for Paris-Brest-Paris. I could alternately title this series “Race (or rage) against the Garmin,” and it is in this ride where I embraced old technology (cue sheets) and got from start to finish successfully.
Intro – Part 1 | 200 km – Part 2 | 300km – Part 3 | 400km – Part 4 | Follow-up Post: 600km Randonneur

The 400km brevet is where you start to separate the women from the girls, men from the boys. Having raced Calvin’s Challenge the week before, covering 200 miles with again massive hotfoot, I have to admit I was nervous about covering almost 250 miles, likely much of it on my own. Our group for this ride was only 4, so I had to be ready to cover the terrain on my own if need be. My own directions, my own Garmin. And this distance, well it means starting before dawn and finishing after dark. So you’re riding in the dark, possibly alone.

My strategy going in was to start out and go fast, covering as much distance as possible before the heat would hit (projected forecast in the 80s that day). Then I’d keep going and maybe get back around sundown. That would be good timing for my headlight batteries (I was nervous about running out of headlight battery power – even though I had a back up), and plenty of time for my Garmin (which this time I brought the supplemental power supply).

I checked in to the starting control and rolled out at 3:20. Bike checked out, control card in hand, I relaxed until the start. As we prepared to start, I loaded my Garmin with the map of the route only to see it seize up. Really?!

The guys suggested re-booting, and I did, and decided not to use turn-by-turn directions this ride. This would be cue sheets (and thankfully I had printed them this time). Plus Jim pointed out after we started that the route deviated from that map anyway.

We rolled out at 4AM (four in the morning), and what I didn’t realize was that we were riding in the dark of night. You see deer meander in front of your headlight and realize that even though there are no cars, it is not wise to boom down descents on dark, winding roads. So the pace was slow and steady leaving Pittsburgh. I started to worry about my batteries being sufficient on the return. I started worrying about my ability to navigate. I was just worrying.

I’d only slept maybe 3 hours the night before, and that week much less, and RAW was ahead and I felt weak, and maybe I needed more recovery time from Calvin’s and maybe maybe maybe I should abandon. Then I was brought back into the ride, observing the start of the morning chorus, hearing the tree frog and bull frog chorus this time, and seeing the rim of sunlight on the horizon as we started climbing up onto the plateau amidst farmlands. There is something very meditative about these long rides, and when I let go of the worries, they become quite special.

I was feeling tired on the bike, likely from a tiring week before, but then I sipped on my concoction of Generation UCAN and Beet Boost, had a RAW bar breakfast on the bike, and felt better. And then I was back in that moment, enjoying the ride, deciding to continue to the next control and the next control, just seeing how far I could go. I wasn’t going to give up, at least I didn’t think so, anyway.

This ride I was also focusing on my nutrition, following my RAW strategy, which was Generation UCAN (tropical orange) with Beet Boost (beet and tart cherry), and the occasional Justin’s nut butter packet for food. When I needed it I would get something with a little more sugar, but I wanted to stick to this plan as much as possible rather than cheap sugars. Honestly I did much better with it this time. I did take in more sugar and salt on the ride home (though got reflux from salty sweet potato chips – off the list), but overall the nutrition was much better dialed in on this self-supported ride.

We rolled through Mercer, the first control, and on to Meadville. At 80-miles into the ride at the Sheetz in Meadville I got my first definitive sign I was going to continue this ride, a reminder that this was much more than a bike ride. A very familiar woman walked in and said “Hey, Dr. George?” and turned out she was a patient I’d seen in consultation in the past who lives with pulmonary hypertension.

She is a super sweet woman, doing well, and was there with her family headed to Erie to enjoy the beach. Seeing her was a shot in the arm, and I marveled at the irony as I no longer contemplated giving up on the ride that day. So we went on to Erie. At this point I had been riding with Ron, super nice guy who was attempting his first 400km brevet as well. Very strong rider, and together we pushed up and up and then down down down into Erie. We rested only briefly at the Tim Horton’s control. And then, it as time to get back.

At this point it was getting hot. And now it seemed there was more climbing and some headwind, which although it decreased our pedaling power really felt good. We stopped more frequently to fill up on water, knowing we would hit a stretch without such stops. Ron was struggling with eye problems, having gotten something in his eye, road debris from a passing truck’s wheel. It turns out this was getting really painful. At one point we stopped, he got out this shard, and then he decided to rest in the shade. He told me to go on, his eye was better, and that he just needed to rest. In my mind I had this utter fear of becoming a liability at night without lights on my bike, so after I asked again and again making sure he was okay, I continued on solo for the rest of the ride. I was seriously nervous about lights, and now being out at night. There was no way I’d finish at dusk. I’d be lucky if I finished around midnight.

Hot foot came back but not as bad this time. It was ride-able and would be for the duration of the 250 miles. In between Calvin’s and this ride I’d been to Big Bang Bicycles and got shoes with a wider toe box to allow space for foot swelling without compression and pain. And this made all the difference. Many thanks to Glenn for fixing the shoe issue. This was a huge relief.

At the Meadville Sheetz control again I got this encouragement. This time a man stopped me and said “How far are you riding?” I answered, “250 miles, just over 80 miles to go.” He then told me he and his daughter did Ironman. We chatted a bit and he asked if I were riding for a cause. “I’m a member of Team PHenomenal Hope, riding for people who live with pulmonary hypertension, a disease of high blood pressure in the lungs making people short of breath that does not yet have a cure.” He generously reached into his wallet and handed me a donation for our cause. That was more energizing than a sugar boost, and I was on my way. Signs, my friends – I gladly take them when they come.

“I’m a member of Team PHenomenal Hope, riding for people who live with pulmonary hypertension, a disease of high blood pressure in the lungs making people short of breath that does not yet have a cure.” He generously reached into his wallet and handed me a donation …

Night finally fell, so with reflective gear back in place, lights back on, I started navigating with the cue sheet in the dark. I found myself on really dark country roads, with an occasional Saturday night pickup truck rolling by, and very little traffic. At first it was a little daunting. Here I was, this lone woman, riding out in the open on my bike by myself. What if I wrecked? What if I were hit by a deer or worse?

I was aware of the dangers, but pressed on. There was no real alternative in my mind.

I had to finish this thing.

To conquer the distance and all these micro fears.

When I hit the control at Ellwood City, the last one before home, the people in the 7-11 were so nice, energetic, and buoyed me to finish. One guy passing through used to work at a local bike shop and commented on my Cervelo outside, telling me good luck and be safe. The woman behind the counter signed my brevet card and said “Wow, what do you get when you finish?” I just laughed in my dazed way, and said, “Well nothing in terms of a prize or anything, it’s just to finish” to which she said “and the satisfaction of having done it, I guess.” And with that I set out, very slowly as now there were a lot of sub-1-mile turns, and worked to get through the last 22 miles. I won’t lie, at one point I missed a turn and gave myself a few extra miles and feet of climbing, but hey, it’s more miles in the legs. And I just turned around, enjoyed the descent back onto the route.

Now the city lights shown brighter, as did my smile as I new I’d be home soon. I rolled onto the main streets in Cranberry around midnight, again few cars around, and then into the Comfort Inn lobby, feeling triumphant.

I’d made it, successfully completing the 400km brevet, but most importantly finding my way home again. I lay down in our room for a bit, drank some water, and then hit the road. The most difficult part of the ride was staying awake on the 20-minute drive home around 1AM. Having been up for almost 24 hours now, all I could think about was a shower and then my own bed. And fortunately I made it home in one piece.

Each of these rides was unique in how they contribute toward the ultimate goal, each in their own right. They were stepping stones of distance and fitness, but also of doing the other stuff – tweaking nutrition (which although I didn’t write about this also was a continuing work in progress through the span of these rides), and working on utilizing gear and navigation to stay safe. They were also opportunities to meet new amazing people, in Pittsburgh and in Maryland, who all share a passion for this strange sport of randonneuring.

As I complete this blog, there is one qualifying ride to go: the 600km ride at the end of this month. Am I intimidated, slightly. Am I excited? Definitely. It will be my final big ride before RAW and promises to be an adventure. Stay tuned for more about randonneuring.