Randonneuring and the Art of Finding Your Way Home Again… 600km 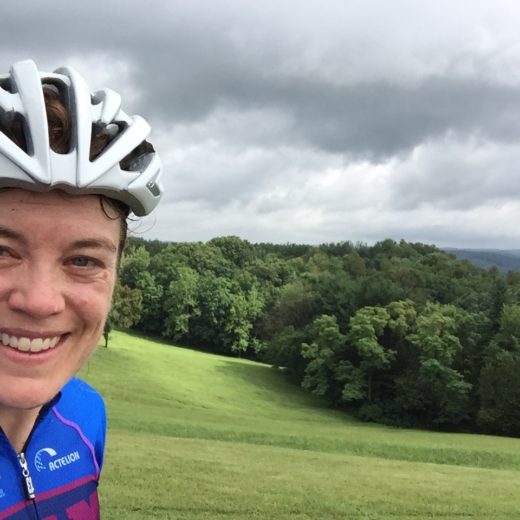 So with the first three qualifier brevet rides behind me, I was 3/4 of the way qualified to be able to ride Paris-Brest-Paris (PBP), the ride that has been on my bike it list for the past year. I had not planned on riding a 600 km ride (turned out to be 383 miles) 8 days after Race Across the West (my hardest ride to date), but with time and official ride opportunities running out, it was time to head to Canal Winchester, Ohio to ride with a new group and see if I would qualify for PBP. This would be a 2-day ride, and my goal was to ride 400km (about 250 miles), sleep a few hours, then set out at 5AM for the last 200km to finish.

Unlike past rides and races this year, I planned ahead better, allowing time to get to Ohio to register on Friday evening and have plenty of time to have dinner and get to sleep before waking up at 4AM to get to the start before 5AM. After registering I got back to my hotel, and Facetimed to catch up with Pascale and hear about her awesome Michigan National 24 hour Championships (she crushed it and WON by the way). We talked for a bit and she asked why I was there, I explained it was a qualifier, and then she said she’d meet me on Sunday for the last 200km of the ride. Her home in eastern Ohio was not far from this ride, but she still would have to leave at 4AM to join me at 5AM. No problem, she said. Wow. That was something to look forward to!

And although many dreaded the rain, I honestly thought to myself, after the last week of 110 degree heat in the desert, I welcome the rain.

On Saturday morning we all gathered at Cyclist Connection, the local bike shop and amazing home base to this event. It was pouring rain. And although many dreaded the rain, I honestly thought to myself, after the last week of 110 degree heat in the desert, I welcome the rain. Plus I hadn’t had a long ride in the rain since RAAM last year, so this would be good and necessary training for PBP.

We set out at 5AM and I was riding with a super nice guy named Scott, one of the locals who rides a lot of distance. He was extremely pleasant and we each talked about our hopes and dreams for the summer, including getting to PBP. As the ride continued, riders separated out, as everyone rode their own pace. I rode most of the time with Scott, and it was a lot of fun.

Pittsburghers had told me this was a flat course. Don’t trust Yinzers about flat versus hills. There were plenty of hills on the ride, and headwinds. Like 15-20mph headwinds at times. And rain. So this was a lot slower than I’d planned. The rain did stop around 10AM, by the time I got to Chillicothe, which made for a more pleasant day.

The wind continued and hills started on the road from Chillicothe to Athens, however. It was a beautiful, green, challenging ride. The green such a contrast to the week before in the desert. I took in the beautiful country road landscape on this ride, realizing that while it is vastly different from the West, Ohio has a beauty unto its own.

Toward the end of the first 250 mile segment every part of my body that contacted the bike ached. Including my neck and trapezius muscles that hold up the head. I learned that in the big event I would have to take more time to stretch and get relief from the posture on the bike.

By the time I got back to bike shop and then my hotel, it was 12:30. I was sore, cold, and ready for a hot shower (another one of the best hot showers ever, by the way), then bed. Even for 3 hours, it would be wonderful. I wondered how riding the next day would be possible.

The alarm went off at 4:15 and I was up. Fresh kit on, got my bike and walked out to the front desk – and there was Pascale!!! Such a sight for sleepy eyes. We got ready and got on the road. I was slow, but surprised that I could ride the next day, with RAW and day one in my body, with a lot of sleep deprivation built up, I was still there, on my bike, and feeling relatively good. Sore but good. We rode to Frazeysburg, and lots of climbing and sometimes a tailwind on the way there.

When we got to the turnaround point, we were less than 100 miles from the finish. We rode back and the hills to me on the return were not quite as bad as going out. My hands and feet and back were a kind of sore I’d never really felt, but we kept going. And truly riding side-by-side with my teamie was the best part of this ride. I’ll remember that for a long long time.

When arrived back in Canal Winchester, we celebrated at the bike shop. Then Pascale went home and I went back to the hotel and showered, ate and slept. The mixture of fatigue and satisfaction in completing the 600km ride amounted to elation. After 33 hours and 59 minutes, I had qualified. With my folks and friends at home pulling for me, and with Pascale literally riding with me, there was not any doubt this wouldn’t happen.

Lesson learned from the 600km: Long distance rides will bring discomfort, even with the best bike fits. Get off your bike and stretch whenever you can. And no matter what, just keep going.

So now it’s official. I’m registered and heading to France in August. The word excited doesn’t really fit. It’s a mixture of excitement, relief at qualifying, nerves about how I’ll do going the distance in France, and how my body will hold up. When I saw the first week of the Tour de France pass through Fourgeres, one of the controls (checkpoints), I started to get more excited than nervous. And when I witness Ryanne conquer her 100-mile race with grit and grace, I was inspired that maybe I also will go the distance.

It will be an honor to wear our team colors abroad, and look for some special Team PH twists to Paris-Brest-Paris. This is not just another ride, not even another epic ride. This will be the longest solo ride I’ve every done (twice as long as my prior personal records), without a crew following me, in a country where I don’t speak the official language, but will share the language of cycling with thousands of riders from all over the world. It’s the next step in our campaign and raise global awareness about a global disease. And I can’t wait.