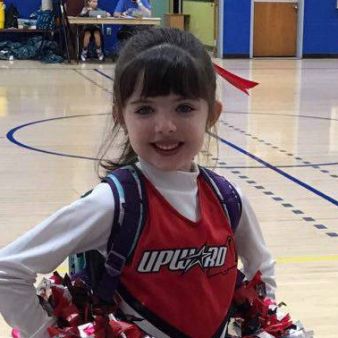 Riley is 6 yrs old and was diagnosed with Pulmonary Hypertension in December 2014 at 4 yrs old.

Riley was always a lively little girl but got a lot of respiratory illnesses before her PH diagnosis. They attributed some of this to asthma.

In the Fall of 2014, she became short of breath while running and swimming so we went to see her cardiologist who had been following her since 15 months old when they found that she had Pulmonary insufficiency. They did an echo in Dec 2014 and it showed that she had moderate to severe PH.

We were sent to Cincinnati Children’s two days before Christmas to do a heart cath and work on getting her fixed up with meds. She was initially put on Sildenafil and Tracleer but her heart declined. They started her on subq Remodulin 3 months after diagnosis.

In November 2015, we also found out that Riley has HHT-Hereditary Hemorrhagic Telangiectasia which is a blood disorder that caused her PH. She is currently on IV Remodulin because the subq route caused her a lot of anxiety and has been on IV for a year.

She is stable and doing well at the moment!

Riley is 6 yrs old and was diagnosed with Pulmonary Hypertension