Tackling PAH With Inspiration From My Mom: Stefanie Leonard 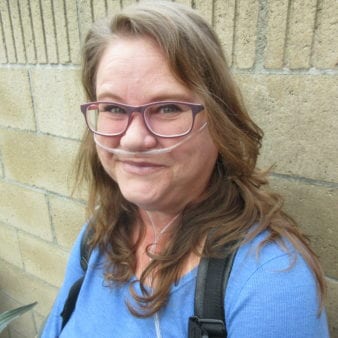 My name is Stefanie, I’m 46, and I’ve been living with symptoms of pulmonary arterial hypertension (PAH) as far back as 2004. It was around then that I first began noticing I couldn’t climb stairs without running completely out of breath and that my weekly hikes were getting harder. I smoked cigarettes at the time and have had asthma since I was a child so I just attributed my shortness of breath, heart palpitations, and fatigue to those factors.

It wasn’t until February of 2011 when I went up to the top of a local mountain via a tram and I started having fainting spells. I would be walking and then fall to my knees from out of nowhere. Concerned and not feeling well at all, I got off the mountain and made an appointment to see a doctor.

My primary doctor referred me to a cardiologist. She gave me an EKG and listened to my story about fainting in the higher elevation. My blood oxygen saturation was below 80%. She suspected more than asthma was at play and made a call to a colleague, Dr. Ronald Oudiz from UCLA-Harbor, who happened to be running a study on a certain drug called tadalafil in treating pulmonary hypertension. A couple days later, I was in Dr. Oudiz’s office learning all about this disease I had never heard of but was now diagnosed with.

Since the cause of my PAH was unknown, I was said to be idiopathic and was categorized as being in the World Health Organization (WHO), Group 1. Dr. Oudiz asked if I wanted to be part of the tadalafil study and I agreed. I had to have a right heart catheterization to determine my pressures. It was frightening; all this new information and these procedures and tests I had to go through seemed never-ending. So I took the study medication faithfully and went into his office once a month for blood tests and a six minute walk test, where the distance you walk in meters in a span of six minutes is measured.

Throughout the first several years, especially when I was in the study, I would feel that having PAH ruined my life. I used to like to hike, and now that was near impossible. I had to be on oxygen 24/7 and it was hard to get used to. I couldn’t walk up hill like a “normal” person without panting and gasping for breath. I felt cheated. But then I would remember the way my mom raised me. She taught me to be independent, take problems as they come, and work to get over obstacles. When I was growing up, she wanted me to realize that I could do (almost) anything I wanted to, no matter what sex I was born, as long as I was willing to put in the effort. So, I would dry my eyes and think about how my mom would handle a diagnosis like PAH. That would not stop her from going out and doing what she wanted to. Whenever I needed some cheering up, I would call my mom.

The clinical trial ended after three years and I stopped seeing Dr. Oudiz on a monthly basis. My pulmonologist helped me get started on riociguat in 2015 and I was stable on that for a few years. In 2018, I went in for a routine visit to my pulmonologist and ended up being admitted to the hospital for nine days because my blood-oxygen level was so low. It was at this point, my pulmonologist referred me to a PAH specialist.

Since then, I have been treated by the amazing doctors and nurses at UCI Hospital in Orange County, California. They have made changes by adding two additional medications, macitentan and selexipag, to my roster and increasing my oxygen’s liter-per-minute flow. Since 2018, I have had two more right heart catheterizations, by now they seem ordinary and routine. I get heart ultrasounds done once a year. And I’m still doing the six-minute walk test at every visit.

I have good days and bad days now. On my good days, I take advantage. I walk around the neighborhood, I go shopping, I’m active. And on my bad days, I think of my mom and how difficult it was for her to be a single mother raising three kids with a full time job. But she persisted. She did it because she wanted to, because she had to, and because it was the only thing to do. That is the kind of attitude I want to have as I continue to face the daily challenges of living with PAH.