Tammy Nesmith-Bernard: Was it scleroderma? 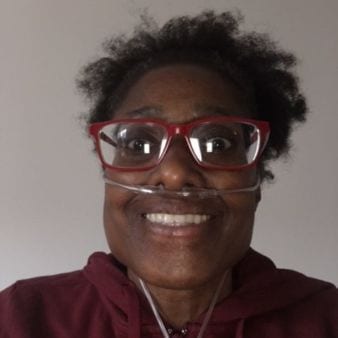 My name is Tammy S. Nesmith-Bernard. My PH story begins when I was walking up the stairs of a train station on my way to work one day, about 10 or more years ago. When I reached the top of the stairs I felt short of breath. I thought, “Whew I need to get to a gym.” Well I started to work out at the gym and noticed I was still out of breath and could barely walk a long block without having to stop and rest. A coworker told me it could be allergies and advised that I see an ear, nose, and throat doctor. I did so, and was administered a breathing test which I failed miserably. The ENT doctor recommended I see a pulmonologist.

I went to the pulmonologist and was given another, more extensive, breathing test which I failed miserably. I was told I had an immune disease called scleroderma, which was attacking my lungs, and that I needed to get on a cocktail of medication that would pretty much whip out my immune system. When all my test for scleroderma came back negative, I rejected the immune suppressants prescription and began to seek help through more natural means.

Fast forward a few years and the shortness of breath continued to escalate. I ended up with a blood clot in my leg which had traveled to my lungs, and I had to be admitted to the hospital. While there, I received a catheterization and was urged that I should start taking medicine for pulmonary hypertension. I’m a person who rarely even took an aspirin when I had a headache, so I was reluctant to take medicine, but did so. Even with medication my shortness of breath continued and I began to use supplemental oxygen.

A few years later on April 22, 2016, I was at work around 5:30pm when part of my left lung collapsed and I went into cardiac arrest. My coworkers called an ambulance and I was resuscitated back to life. Thank Jesus! I was in an induced coma for nearly five weeks. Thank God I was able to get better, and I woke up. I was in the ICU for two months before I improved and went to a step down unit for two weeks. Then I went to inpatient rehab for two weeks.

I have had a brief one week hospital stay since then in 2017 for a small blood clot and low iron. However, I have been stable ever since. I use oxygen continuously, take my medication, go to physical therapy twice a week, and I thank God for everything, every day.

I thank Team PHenomenal Hope for a grant from the Unmet Needs Patient Impact Fund! I will use it mostly to pay down my electric bill, which runs high due to use of the oxygen concentrator running all the time. I will also use it to buy some healthy foods which I need. I am looking forward to a continued relationship with Team PHenomenal Hope.