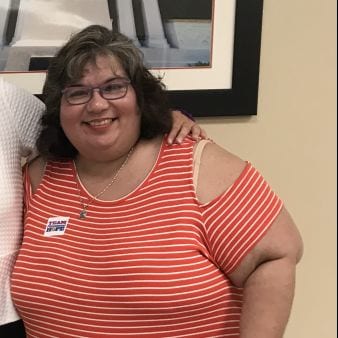 My name is Delia Moro, and I’ve had pulmonary arterial hypertension (PAH) since November of 2009. I live in a country area of Guaynabo City, Puerto Rico.

The day Hurricane Maria was about to hit Puerto Rico, we had heavy rain for about 17 hours. After the hurricane passed and I was able to open the windows and the door of my house, my yard looked like a “Jurassic Park” movie, but without the dinosaurs with all of the trees and stuff that had fallen in it.

Waiting lines for fuel were for eight hours long in most places. Waiting lines for going to buy groceries were more than two and a half hours. There were no batteries, no drinking water in most places, and little food you could buy for long-term survival. The restocking ships weren’t delivering food and supplies to supermarkets. I had to wait for eight days to physically go and see my mom and sister, because the area where they live was flooded. Telecommunications collapsed after the hurricane. My PH meds were delayed. I lost all the groceries I had had before the hurricane due to the lack of electricity. There was no water for preparing food or to clean up, other than what I had stored before the hurricane passed.

The money Team PHenomenal Hope sent to PH patients was godsend, because it helped me to buy canned food and more batteries and to have cash on hand to buy some other necessities.

Several doctor appointments were cancelled because most places need repairing, including doctors’ offices. A fence was broken in my yard by the hurricane winds. I also had to repair the windows dolls on my house, and my screen door was damaged. Thank god my pets were inside the house with me when the hurricane hit.

It wasn’t easy. I tried to do breathing exercises and to find a small inverter to connect my respiratory therapy machine, but I couldn’t afford to buy a battery pack or generator. I didn’t use my apnea machine for five and a half months.

This experience, and all the people who died because from hurricane damages, will not be forgotten.

Right now, the electrical and water services in Puerto Rico are sensitive. If we have some rain, the electricity goes down for hours. But I pray and hope that no other hurricanes like this one come to our island again. We still are still recovering from all the damages, physically and emotionally, from this one.