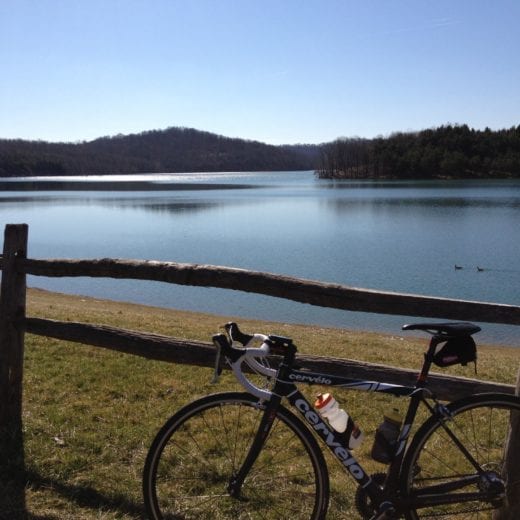 “Cumberland to Hancock and back again”

“From Sheetz to Shining Sheetz”

Mountains. We all climb mountains. Most of us figuratively in our daily lives, and on the bike we get to relish the opportunity to climb them quite literally. There is nothing like seeing a peak ahead of you (or not seeing it) and going up up up.

At this point, we’re down to less than 4 weeks to go. People ask “Are you ready?” Coach Jim reassures us we are ready for RAAM, and that now all we need to do is maintain our fitness and enjoy the ride (literally). When you think of all the prep work that has gone into this, and continues to go into it, especially on the side of our crew chief (crew update coming soon), it’s actually mind-blowing.

So at this point, each rider, while following a general plan from our coach, is taking into account her needs, desires, etc in this final phase of training. This past weekend was my second to last weekend to get some major miles in, and not having climbed mountains in awhile, I set out to climb in the Poconos and then Cumberland to Hancock and back again. Why Maryland of all places?

Ever since reading Unfinished Business by RAAM veteran Dex Tooke, I wanted to check out what some call one of the toughest segments in RAAM. This was a monumental segment for him because it passed through Flintstone, MD, his nemesis from the previous year (which be conquered). In his book he writes about the Appalachians:

For RAAM racers, the Appalachian Mountains are shrouded in an aura of intimidation, if not of fear. RAAM has been called a race of truth, a race where an individual travels to the extremes of both their physical and mental limits. Call it a vision quest if you will. When asked why they race RAAM, some riders will tell you it is because they want to discover who they really are deep inside; they want to push themselves to that ultimate realm where they are introduced to an inner self they have never before met. Well, the Appalachians will grant them their wish and the racer better be prepared for who he or she meets.

In the RAAM book it says:

The four major climbs in this section are tough. The last climb (up Sideling Hill) could be a walker. In Hancock the route is 2 blocks from the Potomac River. The river has dropped 1900 feet in the 90 miles since we crossed the North Branch in Gormania!

This is the most difficult section of RAAM, measured in feet of climbing per mile. Fortunately there is a bit more downhill than uphill.

Many advantages to this route when I plotted it out: 1. I got a look at the RAAM course itself. 2. It was an out-and-back with few turns, so the chance of getting lost were nil. (Many would tell you that if you cut the bottom out of a brown paper bag, I’d still struggle getting out of it. Even with GPS. Even with directions taped to my top tube under plastic wrap. We all have our strengths and weaknesses I guess.) Plus the route kind of parallels Interstate 68, though it deviates occasionally into wooded canopies and gorgeous farmland. 3. I would be able to get some major climbing in, which I just felt like I needed, if not physically definitely mentally. So anyway yesterday was the day.

After arriving in Cumberland in the afternoon, and the thought crossed my mind that I may be racing the sun west on my return leg. There are 5 significant climbs on this leg: Martin’s Mountain, Polish Mountain, Green Ridge, Town Hill, and Sideling Hill. I wondered if I should cut it short, get home earlier, but decided no. I’d wanted to do this whole segment for months now, and this was my chance.

A quick change into my kit in the Sheetz, filled a 3rd water bottle for my back pocket, and got to the Park and Ride (I wondered if this was for cyclists to park and ride) and set out. At about mile 1 you start climbing up Martin’s Mountain, a nice 5-mile climb at that, gradual, and then at the top? Amazing view! Yes, this was what I wanted to see. This was the real advantage to the ride. Then the descent – awesome. Tuck and go on the Old National Highway, a Scenic Byway with a bike route on it. Perfect, and hardly any cars (they’re all on 68).

My favorite climb may have been Green Ridge and Town Hill, at this point I was away from 68, and riding in a canopy of trees, listening to a babbling brook on the side, the birds, and a target range at one point as well. It was beautiful getting to the top, with a bed and breakfast on one side and then this awesome view on the other. The Appalachians do have their majesty. I did take a few pictures along the way because I know when we return here in about 4 weeks, we won’t have time to stop then.

The final climb, Sideling Hill, was a long long climb. Actually just over 2 miles on the ascent. I actually felt some excitement as I saw the interstate’s rock formation in the distance, and kept holding my effort back a little as I knew I still had these mountains to climb again to get back. Sideling Hill is the cool rock formation you pass through on Interstate 68 (a drive I have done many times, driving from Maryland home to Illinois during my years in Baltimore). It doesn’t have the same cut out on the non-Interstate road, but it is really cool (and a long climb) nonetheless.

I climbed and climbed, again under trees, and then saw the cell towers. By the way, both Martin’s Mountain and this peak had cell towers, making me think I was climbing my own Mt. Ventoux and smiling. I stayed in the rhythm of my bike, just feeling the road, listening to the pedals, and climbing. At the left turn at the top, it is flat for about 50 yards, then whoosh – descent! Ah. And I realized I would be descending all the way into Hancock. At this point I was starting to do some of the math and realizing that the descents really did feel a bit longer than the climbs in distance. Sideling, for example would be a 5-mile climb back West. Ah, anticipation. Acceptance. Ride the heck out of your legs. It’s all a part of the ride.

Stopped at the Sheetz in Hancock to refill water bottles, eat a Justin’s Maple Almond butter packet, and set out again. By this time on my ride, all I had was water and electrolyte tablets, and maybe 1/4 a scoop of Generation UCAN. I had had a big breakfast and supplemented with trail mix and hour before the ride, so I was good to go. I realized at this point maybe I really am fat-adapted, meaning able to do these endurance rides with very little sugar. I actually ate a bike of an Amrita bar about 1/4 of the way back, and realized it was a bit too much for on the bike, though it tasted good, so stuck with UCAN and water to get me back.

The climbs were indeed longer going back, and I started to feel what racers call “hotfoot.” It’s where the bottom of your foot hurts with each downward pedal stroke. Mindful of this rather than frustrated by it, I noted the discomfort, made some adjustments, and kept going. It was still there, I knew it was, but it didn’t overtake the ride. There was climbing and scenery to see after all. Filled with calmness, I realized this ride on the whole was probably one of the most meditative I’ve ridden, I suppose, if that makes any sense.

The climb up to Martin’s Mountain was definitely the longest, but again the payoff the greatest as the descent was straight and basically almost all the way downhill back to the Park and Ride outside of Cumberland. Going ~ 40mph mph on a bike, you tuck like a skier, head down just over the handlebars, elbows in, knees holding onto the top tube, and just go – it’s faster to be aero than pedal (and you’re geared out anyway). FUN.

At the end of the ride, with the satisfaction of fatigue, in my mind I dedicated this ride to Dex Tooke, whose book has inspired me on this journey to Annapolis. I changed (slowly, stiffly) back into civilian clothes in the Cumberland Sheetz, got some healthy snacks (yeah Sheetz!) and a Mexican Coke (best Coca cola ever) and headed home. I look forward to riding it with my teammates, crushing these mountains one by one (and then the ones after that) as we approach the finish line. That will be incredible.