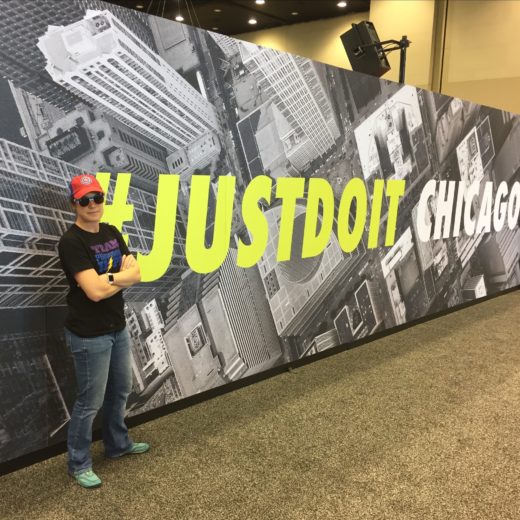 This past year was a transition year. A new chapter opened as I moved from Pittsburgh to Denver to start an exciting new job. And as you can imagine, winding up one job and heading to the next, supporting the transition of our nonprofit, and selling my home and finding a new place to live, all made it difficult to train, or even stay in shape. Days became weeks, and then months, and well, you know how it goes, life happened.

But in the midst of all of that I received a lottery entry into the Chicago Marathon. I had signed up on a wing and a prayer (it is luck whether you get in) because I’d been inspired by my runner teammates Monica, Mandy, and Paula in Brazil. So okay, first marathon in 8 years, check. And then I started riding bikes regularly again with new friends in Colorado and this idea of a 12-hour race in the desert was put in my head. So why not? It was time to put these events back into my life, get healthy again, and more importantly, to race again for Team PHenomenal Hope.

I trained and successfully completed both the Chicago Marathon and the 12-hour race in the 6-12-24 Hour World Championships. But these races were not really about me or my goals. Rather, they we about connecting, and lifting up the stories of two very special people. So I want to share them with you.

Benita’s PH story begins in December 2007 when she was at her nephew’s Christmas party. Her feet and ankles were swollen, and she could not WAIT to sit down. The following Monday, she called her Internist, and saw him on Thursday. He did an EKG in his office, came back to her room with a tear in his eye. She asked him if he was crying? He said it was empathy, as there was damage to her heart. He referred her to a cardiologist at Central DuPage Hospital, who did an MRI. He said if it came back one way, he would treat her. If it came back another way, she would need to see a specialist. She was started on furosemide, but it did not help.

She was then referred to a PH specialist who could not see her until late March. But waiting became difficult, and she became very uncomfortable and always short of breath. She went back to the internist, told him how she felt, and within a week, he had the name of another PH specialist at Rush. She saw him the 2nd week of February, and was diagnosed with PAH after a right heart cath. She started Remodulin IV in June of 2008, and has been on it ever since. In July, he raised her and she is not having as many “fainting” feelings since she reached her goal dose.

Benita uses her experience as an opportunity to help others. She has also been the Support Group Leader of the Elmhurst, IL chapter since 2009. She has helped many other PHer’s since taking on this position. She works to reach out to all her fellow group members, doing follow-up calls if they don’t RSVP for the meetings, and welcomed my dad and me to her October meeting. And did I mention that she is a huge Cubs fan?

On Marathon Sunday I thought about Benita as I ran my first marathon in 8 years. I also had the amazing support of my team back in Pittsburgh (and, well, around the world), giving me advice on how to train, how to fuel (mysteries to me compared with riding long on the bike). Sarah had called after her World Triathlon Championships and downloaded her advice on fueling and not overtraining. The team gave pointers in our team chat room. Monica and Mandy each checked in via text to see if I was ready. And wow, was I surprised when Monica was *in Chicago* for marathon weekend. Seeing Monica on the course, as well as my parents and aunt and uncle, and Kate and Aaron Bennett, reenergized my stride. And that’s how together, Benita, my team, and I finished the Chicago Marathon.